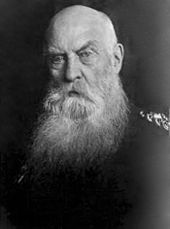 Hereditary Prince Georg was the son of Bernhard II , Duke of Saxony-Meiningen, and his wife Marie Friederike , née Princess of Hesse-Kassel (1804–1888). In his childhood - he only had a much younger sister named Auguste (1843-1919), from 1862 Princess of Saxony-Altenburg - he was raised by the important educator Moritz Seebeck . From 1827–1829, the later founder of the kindergartens, Friedrich Froebel , accompanied the upbringing of young Georg in an inspiring way, since at that time he was already in close contact with Georg's father, among other things, regarding the Helba plan. In 1842 he received the uniform of the Saxon-Meiningischen rifle battalion with a lieutenant's badge. In 1844 Georg studied art history, history and law at Bonn University, among others with Ernst Moritz Arndt , Friedrich Christoph Dahlmann and Gottfried Kinkel , in 1847 he finished his studies in Leipzig. He later enjoyed painting training with the court painter Paul Schelhorn . He came into contact with important artists of his time and was considered a great patron . He made an extensive research trip possible for his fellow Bonn student August Schleicher by supporting him financially. Then he did his military service. In 1848 Georg joined the Prussian Guard cuirassier regiment as a prime lieutenant. In 1849 he took part in the Schleswig-Holstein war as a staff officer of the Saxon-Meiningischen rifle battalion.

In 1850, Hereditary Prince Georg married the Prussian Princess Charlotte (1831–1855), daughter of Albrecht of Prussia and Princess Marianne of Oranien-Nassau (engagement on December 25, 1849 at Charlottenburg Palace). After the marriage, the couple alternated between Meiningen and Potsdam. The three children Bernhard III come from the marriage . , Georg Albrecht (1852–1855) and Maria Elisabeth (1853–1923). Princess Charlotte died on March 30, 1855 with her fourth child in childbed.

His third wife was the actress Ellen Franz (1839-1923), who was appointed Helene Freifrau von Heldburg before the wedding in 1873 . His lover since 1868, the two shared a common artistic interest and theater work. This morganatic marriage aroused indignation in aristocratic circles.

Under pressure from Otto von Bismarck , Georg's father, Duke Bernhard II, who had stood on Austria's side in the German War , abdicated on September 20, 1866, so that Georg then became the reigning Duke of the country as George II. On October 31, 1867, he was appointed chief of the 2nd Thuringian Infantry Regiment No. 32 , which was based in the Meiningen main barracks . In 1871, Duke Georg II took over together with his eldest son and Hereditary Prince Bernhard III. participated in the Franco-Prussian War and also in the imperial proclamation in Versailles on January 18, 1871. Limited sovereignty rights remained for the duke even after the formation of the German Empire . Initially assessing the founding of the empire positively, there was a break between George II and Kaiser Wilhelm II in 1889 , as the liberal and humanistic principles of George II could not be reconciled with the conservative , chauvinistic policies of the Hohenzollern and Kaiser. George II advocated a liberal , parliamentary and England-friendly monarchy that included the integration of the newly emerged social democracy into state politics.

Under the reign of Duke George II, politics, the legal system and society were liberalized, and reforms continued to be carried out in the school system (elementary school law and school medical care from 1875), in the electoral system and in the administration (municipal law 1897). George II also campaigned for equal rights for women in educational and academic professions. His activity as the ruling duke is to be valued just as highly as his services in culture and art.

In 1902, on the recommendation of the physician Georg Leubuscher , Duke Georg founded the Herzog-Georg Foundation, which aimed to provide professional training for nurses.

Promoter of art and culture

Inscription on the Meininger Theater, built in 1909 - a testament to Georg II's loyalty to the people.

Georg II was famous for his work for the theater and in particular with the reorganization of the Meininger court theater and the Meininger theater group (see Meininger ). He directed himself, designed costumes and went down in cultural history with his reforms of directorial theater , the so-called Meininger Principles . Together with his third wife, the actress Ellen Franz, the later Helene Freifrau von Heldburg (wedding 1873 in Bad Liebenstein ), and director Ludwig Chronegk , he led the "Meininger" to international fame with performances in Berlin, Vienna, Moscow, London and in many other cities in Europe. Through these tours, which lasted until 1890, his ideas of modern directorial theater quickly spread on the stages of Europe. Meiningen is still considered a theater city today.

The Meiningen court orchestra also achieved world fame under Georg II . The construction was started with the commitment of Hans von Bülow in 1880, who wrote the "Meiningen Principles" of orchestral work here and formed the chapel into an elite orchestra which, under the leadership of other well-known conductors, was able to maintain its high quality until 1914. Johannes Brahms , who was often a guest in the ducal house and worked with the court orchestra, became a close friend of Georg II .

The Duke cultivated relationships with painters, sculptors, actors, musicians and scientists, whose work he promoted and supported. Artists and intellectuals were guests at his residence in Meiningen, Altenstein Castle , Veste Heldburg , Berghaus Salet Alp, the Sinnershausen hunting lodge and in particular the Villa Carlotta . So he promoted art and culture beyond the borders of the duchy. Due to his humanistic approach to life and liberal reforms, he was considered close to the people.

The " Georgsbrücke " over the Werra west of the old town and the geriatric specialist clinic "Georgenhaus" (previously Georgenkrankenhaus 1832–1952, then district hospital) in Meiningen are named after Georg II , as is the Georgianum grammar school (Hildburghausen) .

In January 2020, an 80-cent individual postage stamp was issued by Deutsche Post with the likeness of George II, which commemorates the “Act of June 8, 1867 on the Press” that he passed. With this liberal law, George II guaranteed freedom of press, assembly and association in the Duchy of Saxony-Meiningen as part of the reforms he carried out. 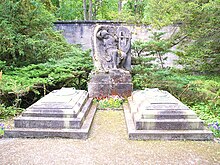 From his second marriage to Princess Feodora zu Hohenlohe-Langenburg (1839–1872) :