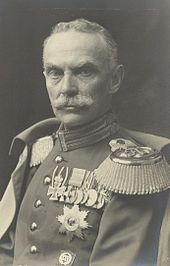 Bernhard was born as the eldest child of the later (from 1866 ) Duke Georg II of Saxony-Meiningen and his first wife Princess Charlotte of Prussia (1831–1855).

Two days before his fourth birthday in 1855, his mother died at the age of 23 giving birth to their fourth child, a son who also did not survive the birth. At the end of January of the same year, his younger brother Georg Albrecht died at the age of three. In 1858 his father married Princess Feodora zu Hohenlohe-Langenburg for the second time . In addition to his only biological sister, Princess Maria Elisabeth (1853–1923), with whom he maintained an intimate relationship throughout his life, he had three half-siblings, with Prince Viktor only being a few days old in 1865. In 1860 the theologian and historian Wilhelm Roßmann was appointed as his tutor .

Bernhard von Sachsen-Meiningen with his bride Charlotte, around 1877.

In 1867 Bernhard was placed as a second lieutenant à la suite in the Saxony-Meiningen infantry regiment. In 1869 he went to Heidelberg to study classical philology . He served as an orderly officer in the 6th Thuringian Infantry Regiment No. 95 and in the 6th Cavalry Division in the Franco-German War . After joint participation in the imperial proclamation in Versailles on January 18, 1871, he returned with his father, Duke George II. He then continued his studies in Leipzig . The stepmother Feodora also met an early death in 1872 at the age of 32. After completing his studies, Bernhard joined the guard fusilier regiment of the Prussian army in Berlin in 1873 for military training . Since 1878 he was a corps loop bearer of the Corps Saxo-Borussia Heidelberg .

Bernhard was interested in the modern Greek language and was the author and translator of several works, including von Schiller. Between 1873 and 1894 he made numerous study trips to Greece and Asia Minor, where he also visited archaeological sites and had contact with well-known archaeologists . In this field he received in 1889 from the University in Athens entitled "Phil Helene" and a laurel wreath and continue in 1912 honorary doctorate from the University of Breslau .

Bernhard married the Prussian Princess Charlotte (1860–1919), the next younger sister of the future German Emperor Wilhelm II. , On February 18, 1878 in Potsdam , and thus belonged to the imperial family. The marital union had a daughter: Feodora (1879–1945), married in 1898 to Prince Heinrich XXX. Reuss to Köstritz (1864–1939). In 1882 Bernhard was transferred to the General Staff and moved into an apartment with Charlotte in Charlottenburg Palace . In 1889 he was appointed major general and in 1891 lieutenant general. The German Archaeological Institute made him an honorary member in 1892. In December 1893, Hereditary Prince Bernhard and Hereditary Princess Charlotte took their permanent residence in the Great Palace (Erbprinzenpalais) in Meiningen. 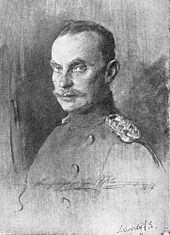 Bernhard became General of the Infantry and was Commanding General VI from 1896 to 1903 . Army Corps in Wroclaw. On September 15, 1903, Bernhard was promoted to Colonel General and appointed as Inspector General of the Second Army Inspection based in Meiningen. With his wife he made numerous car trips through the duchy and the German Empire and increasingly took on the duties of representation for his father. In 1909 Bernhard received the rank of General Field Marshal , then ended his military career in 1912 and finally moved to Meiningen.

After his father died a few days before the assassination attempt in Sarajevo on June 25, 1914 at the age of 88 and after 48 years of reign, the "eternal" Hereditary Prince took over as Bernhard III. the government at the age of 63. His conservative Prussian convictions made the now ailing duke unpopular in his country, which had been liberal until then. After the beginning of the First World War, Bernhard III transferred. the affairs of state of his wife Charlotte, who now led the country as duchess, and went to the front to inspect Meiningian troops and military facilities.

After his brother-in-law had to abdicate as German Emperor and King of Prussia in the course of the November Revolution on November 9, 1918, Bernhard did the same the following day under pressure from the Meiningen Workers 'and Soldiers' Council . 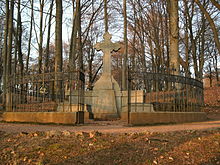 Bernhard's wife Charlotte died on October 1 of the following year at the age of 59 during a cure in Baden-Baden . After his abdication, Bernhard lived in seclusion at Altenstein Castle in Bad Liebenstein and Meiningen. After his death on January 16, 1928 in Meiningen, he was laid out in the Great Palace (Erbprinzenpalais) and on January 20, with great sympathy among the population, he was brought to the train station in a funeral procession. He was then transferred to Bad Liebenstein, where he was buried next to his wife Charlotte in the park of Altenstein Castle on January 21, 1928.