Duke Bernhard I of Saxe-Meiningen

The seven sons of Ernst I ruled the country jointly after the death of their father in 1675, but divided the duchy among themselves after five years. Bernhard became through the division of the donors of the line Sachsen-Meiningen and determined Meiningen to his residence city.

The construction of a representative castle began immediately. The construction of the palace was completed in 1692 and was named Elisabethenburg after the Duke's second wife . In 1690 the duke founded the court chapel and in 1692 the palace park was initially laid out as a Renaissance garden. The keeping of the court was completely inadequate for the financial situation and the stability in the country soon slipped away from Bernhard. The sale of chamber goods and an additional burden on the population with taxes and compulsory labor were the result. But his immense expenses because of his penchant for alchemy and military affairs also led to multiple complaints from the estates.

Bernhard was highly educated and paid particular attention to topics such as religion and the school system, where he worked in the administration of the country with general visits. In terms of foreign policy, Bernhard's government was characterized by tensions and armed conflicts, primarily with his brothers.

Although Bernhard decreed the indivisibility of the country in his will, there was no primogeniture . Bernhard's sons ruled the country together after his death. This led to power struggles and the further economic decline of the principality. 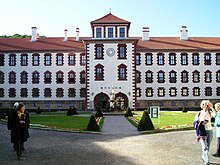 From his first marriage in 1671 to Maria Hedwig (1647–1680), daughter of Landgrave Georg II of Hessen-Darmstadt , he had the following children:

From his second marriage in 1681 with Elisabeth Eleonore (1658–1729), daughter of Duke Anton Ulrich von Braunschweig-Wolfenbüttel . Mecklenburg-Schwerin, the following children were born: