Bernhard was the youngest child of Duke Georg I of Saxony-Meiningen and his wife Louise Eleonore von Hohenlohe-Langenburg . He survived his two sisters Adelheid (1792–1849), later Queen of Great Britain, and Ida (1794–1852), later Duchess of Saxe-Weimar-Eisenach , by more than 30 years. 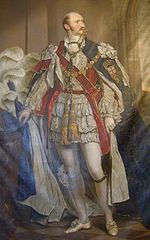 Bernhard II as a knight of the Order of the Garter; Painting by Samuel Friedrich Diez ;
Meiningen museums

Thaler from 1861 with a portrait of Bernhard

After the early death of his father on Christmas Eve 1803, he followed this under the tutelage of his mother Louise Eleonore (1763-1837) in government and took over the same in 1821. Three years later he left the improved state constitution , which was guaranteed by the German Confederation Kicking power. After the extinction of the line of Saxe-Gotha-Altenburg Bernhard II combined. With the agreement entered into on November 12, 1826 Teilungsvertrag the Duchy of Saxony-Hildburghausen , the Principality of Saalfeld , the Office Themar , the county Kamburg and the rule Kranichfeld with his hereditary land, located more than doubled due to this increase in territory and population. On August 23, 1829, the Duke gave the united countries a new constitution.

Influenced by trips to England, where his sister Adelheid was queen from 1830, the English parliamentarism determined many state and economic fundamental decisions in Saxony-Meiningen. In 1830 Bernhard was also accepted into the Order of the Garter. The improvement in economic conditions allowed Meiningen to expand to the north (including Bernhardstrasse ), the establishment of the court theater and the construction of Landsberg Castle .

Monument to Bernhard II in the English Garden, Caspar von Zumbusch 1905, destroyed in 1949

In March 1848, Bernhard II approved the people's demands before major protests broke out, readily accepted the imperial constitution, later joined the Union and, even after the failure of Prussia's plans in 1850 , showed his sympathy for the German unification efforts. He himself was made Knight of the High Order of the Black Eagle by the Prussian King on February 27, 1850 , and Lieutenant General a la suite of the Prussian Army on May 17, 1850 . On May 31, 1859 he was appointed General of the Infantry .

Later he turned to the Greater German party , protested against the military convention concluded by Saxe-Coburg and Gotha with Prussia, and in 1866 , alongside Prince Reuss zu Greiz , was the only Thuringian ruler on the side of the opponents of Prussia. During the peace negotiations, too, he was so averse to joining the North German Confederation that Prussian troops marched into Meiningen on September 19. This forced him to resign on September 20, 1866 in favor of the Hereditary Prince Georg .

From then on, Bernhard Erich lived as a private person in the Great Palace , which he had built in 1823 for his mother as the Wittumspalais . The proposed advisory role for his son Georg refused. The relationship between father and son was tense. During the time of his reign, Bernhard had denied his son any access to government affairs. When Georg II entered into the morganatic marriage with the actress Ellen Franz in 1873 , Bernhard tried in vain to obtain the removal of his son from Kaiser Wilhelm I. It was not until 1878 that he agreed to see his daughter-in-law. Bernhard died on December 3, 1882.