The Landsberg Castle in Meiningen is a former summer residence of the Dukes of Saxe-Meiningen and housed to December 2013 a romantic first class hotel .

The castle was built on the ruins of the Landeswehre castle , which was destroyed in the Peasants' War, between 1836 and 1840 and is located on the northern outskirts of the district town of Meiningen on a 378 meter high mountain cone that protrudes into the Werra valley between the Meiningen district of Walldorf and Meiningen . Landsberg Castle has been owned by a Chinese consortium since 2016 , which intends to continue operating it as a hotel. 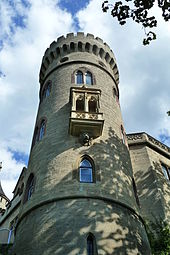 The castle is a neo-Gothic building modeled on 19th century English aristocratic residences. It consists of three parts, the actual castle with three towers, the gatehouse and the castle administrator's house. The complex is surrounded by a crenellated wall.

Behind the gatehouse to the north, on the right-hand side, after a small rise, is the main house, bounded by a north round tower with a conical pointed dome and an octagonal tower with a crenellated platform. A wide but short flight of stairs leads to the lower rooms with the castle tavern. A staircase next to it with richly decorated stone parapets leads up to the main entrance on the east side of the castle. From here you first come to the weapons hall with its oak-paneled ceiling and then via a corridor to the knight's hall . Next to it is the access to the crenellated main tower with its 100-step spiral staircase , from the platform of which visitors can enjoy a wide panoramic view of the northern districts of Meiningen and Walldorf, the Werra Valley, the Rhön and Dolmar .

Behind the main house is the castle courtyard with a fountain, which is followed by the castle manager's building. Between this house and a gate that forms the southern end of the palace complex, the keep of the former Landeswehre castle is integrated into the palace wall. The ceilings of numerous rooms and halls are provided with Gothic ribbed vaults. The castle is provided with further round turrets with conical domes, walls and other ornaments.

The “Lion Orc” on the main tower and the neo-Gothic knight's hall, which is paneled with richly decorated oak and is adorned with eight large wall paintings based on designs by Wilhelm Lindenschmit the Elder, depicting events from the Wettin- Saxon and Thuringian history. In the castle there are luxuriously furnished rooms and suites , including the richly gilded bridal suite .

Landsberg Castle was opened as a luxury hotel in 1978 by the trade organization HO and it was later managed by Meininger Hotels mit Flair GmbH . It has been closed since January 2014. The hotel has a total of 13 double rooms and 7 suites, including a bridal suite, all of which, with the exception of the rooms on the top floor, can be reached by elevator. The hotel includes the restaurants “Rittersaal” with a terrace and “Burgschänke” with beer garden and a tower bar.

During the GDR years, the hotel was very popular with diplomats and ambassadors because of its architecture and exposed location. Among the famous guests were at this time also Hot Chocolate and Boney M . Until it closed, the hotel was a popular destination for wedding couples from all over Germany because of its fairytale architecture. For this reason, the city of Meiningen had set up a branch of the registry office here from 2005 . Well-known guests in recent years have included Jörg Pilawa , Gunther Emmerlich , Janine Kunze and Tina Ruland . The TV station VOX shot an episode of the docu-soap "4 Weddings and a Dream Trip" here.

The Landeswehre castle was first mentioned in a document in 1129. It served to protect the trade routes to Würzburg ( Hohe Straße ) and Fulda ( Frankfurter Straße ), the Werratalstraße towards Salzungen , the Werrafurt near Walldorf and the access to Meiningen. An estate at the foot of the mountain also belonged to it. In the German Peasants' War werra upward pulling peasant troops stormed the castle on May 13, 1525 and destroyed them down to the dungeon and parts of the wall. It has been uninhabitable since then. The tower, which leaned to one side when it was blown up to extract building material in 1685, has been preserved in its remains and integrated into the castle ensemble.

Inspired by his visits to his sister Adelheid , Queen of Great Britain, Duke Bernhard II of Saxony-Meiningen acquired the Landsberg and the associated land with the estate in 1836 and had a new one under the direction of the architects August Wilhelm Döbner and Carl Alexander Heideloff until 1840 Erect a castle in neo-Gothic style based on the example of English aristocratic residences. Adelheid had the plans drawn up by the English architect Sir Jeffry Wyatville and also took over part of the costs. The estate, which has been independent since then, was converted into a Swiss- style dairy farm with barns, stables, a coach house and a manor house by 1842 .

The castle was a popular destination until the First World War. In 1920 it came into the private possession of the New York businessman HL Erny and later in the possession of the Berlin businessman P. Weber. The castle was no longer accessible until 1945. After brief use as a retirement home and educational institution, the HO operated an excursion restaurant in the castle from the 1960s, which was finally converted into a luxury hotel from 1975 to 1978. From 1991 to 1996 the castle was owned by Prince Friedrich-Ernst von Sachsen-Meiningen, who continued the hotel business. In March 1997 Meininger Hotels mit Flair GmbH took over the castle and hotel and in 2003 carried out extensive renovation and modernization work. At the beginning of 2008 the castle was transferred to the non-profit foundation Meininger Baudenkmäler . The castle has been up for sale at Christie's auction house since 2015 and was sold to a Chinese consortium in July 2016. In autumn 2017, the restaurant was to be reopened as a luxury four-star hotel after modernization, followed by the entire castle in mid-2018. A restaurant opening has not yet taken place.

Castles and palaces in Meiningen