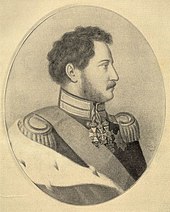 Wilhelm was the second son and fourth child of Landgrave Wilhelm I of Hesse-Kassel , who was elected elector in 1803, and his wife Wilhelmine Karoline of Denmark (1747-1820). His older brother Friedrich (1772–1784) died as a teenager. Wilhelm received a predominantly military education, but also studied, while still a boy, for some time in Leipzig and Marburg and then undertook some major educational trips.

When Napoleon's French occupied Kurhessen in November 1806, Wilhelm followed his father into exile in Holstein and Prague . In 1809 he went to Berlin for a long time , where in 1812 he began his love affair with Emilie Ortlöpp (1791–1843), which lasted to the end of her life . In 1813 he took part in the battles against Napoleon in the corps of the Prussian General Yorck , having been awarded the rank of Prussian Lieutenant General since 1804 , although he did not look good. After the French occupation had been driven out of Kassel by Russian troops in October 1813, Prince Elector Wilhelm moved to Kassel on October 30, 1813 and issued a call to the Hessians to fight France. After his father's return to the top of restituted Electorate Wilhelm took over in March 1814 with the rank of general of infantry , the supreme command over the Hessian troops . But during the siege of the forts of Metz and Luxemburg , which he commanded , he did not act very gloriously, so that he and the Hessian army were no longer used in the campaign of 1815 .

After the Second Peace of Paris , Wilhelm first lived in Philippsruhe Castle in Hanau , while the White Palais left to him by the estates in Kassel was rebuilt and expanded according to his wishes. ( He only had the adjoining Red Palace built after he took office.) Meanwhile, his marriage had broken down. Wilhelm II had brought his mistress Emilie Ortlöpp with him to Kassel as early as 1813 , and in 1815 the princely couple separated with an initially kept secret contract, but continued to argue in public until the Electress left the country in 1826; it did not return until 1831. A divorce was refused for political reasons. It was only after August's death that Wilhelm married Emilie, whom he had elevated to Countess Reichenbach in 1821.

The last three ruling generations of the Kurhaus were embroiled in violent generational and family conflicts. After the death of the reactionary Wilhelm I on February 27, 1821, who had pursued a policy of returning to the conditions at the end of the 18th century, Wilhelm II immediately introduced modern reforms in the administration after he took office . However, overall he pursued a conservative policy. Contrary to the expectations of the bourgeoisie, he neither convened the estates , nor could he imagine his state with a contemporary constitution in the sense of a constitutional monarchy .

Wilhelm's family life was also determined by massive conflicts - similar to that of his father and later also his son Friedrich Wilhelm. In 1821 Wilhelm II raised his lover, Emilie Ortlöpp, to Countess von Reichenbach and later, after he had bought her and her children the Moravian estates Lessonitz , Bisenz and Unter Moschtienitz , to Countess von Lessonitz. For them he acquired the Palais Gohr , built in 1772 on Königsstrasse in Kassel, in 1821 , had it rebuilt, expanded with a staircase and a side wing with a ballroom and connected to his White Palace with doors. Emilie had considerable, if not decisive, influence on Wilhelm during his ten-year sole reign. The couple had eight children:

Electress Auguste and Elector Prince Friedrich Wilhelm withdrew from the court and gathered the opposition from the nobility and bourgeoisie in the so-called Schönfeld Circle . Since the elector and his “official” lover had placed himself completely outside of the bourgeois morality that had in the meantime also shaped the nobility , he was now completely isolated in terms of family and politics. The population openly took sides against the mistress and for the Electress. The hostility towards the autocratic regent was already evident in the threatening letter affair of 1823, when Wilhelm was threatened with death in an anonymous letter if he did not fulfill three ultimate demands: granting a constitution , excluding his mistresses from all government business and refraining from doing so personal corporal punishment of subordinates. In 1826 conditions in Kassel were so shattered that Electress Auguste left the country with the Elector, first to the Netherlands , then to Berlin and finally to Bonn . Wilhelm then blocked all maintenance , so that Augustes brother, King Friedrich Wilhelm III. of Prussia, had to pay for it. All efforts of the Prussian king to bring about an agreement between the electoral family failed. Neither Finance Minister Friedrich von Motz nor General Oldwig von Natzmer , who were sent to Kassel for this purpose, were able to achieve anything.

Wilhelm II ruled as an absolutist autocrat without the participation of the estates . His first official acts still promised progress. So he reduced the strength of the Hessian army from 20,000 men to 7,000, which was more appropriate for the size of his country, but partly diverted the savings achieved for his personal purposes. On June 29, 1821, he also had the state administration reformed according to the Prussian model, with the country divided into four provinces and the judiciary separated from the administration. The previous offices were in larger groups merged, and the first instance jurisdiction has been in the new judicial offices outsourced, which were generally responsible for the previously existing districts.

Otherwise, Wilhelm II pursued a policy which, in its conservatism, short-sightedness and arbitrariness, was not conducive to the welfare of his country and its people. For a long time he was one of the most ardent supporters of the " triad politics " between Austria and Prussia pursued by the German medium and small states ; Only when Prince Metternich made it clear to him in the autumn of 1823 that this attitude stood in the way of an Austrian consent to the purchase of Moravian goods for his lover did he abandon this policy.

Wilhelm II also knew how to provoke Prussia not only through his behavior towards his wife, but also through his politics, in that he persistently opposed the Prussian efforts to create a German customs union . After the Grand Duchy of Hesse-Darmstadt and Prussia had founded the Prussian-Hessian Customs Union in February 1828 , it closed in September 1828 in Kassel as a countermeasure with the Kingdom of Saxony , the Kingdom of Hanover , the Duchy of Nassau , the Free City of Frankfurt and 13 other north- and the small states of Central Germany signed the treaty establishing the Central German Trade Association , which was limited to 1834 , with the aim of preventing further states from joining the Prussian-Darmstadt system. This venture was supported by Great Britain and Austria , who also wanted to limit Prussian influence. The association, however, was quite a bad design, because neither common customs tariffs were introduced nor a uniform area for domestic trade created. The only effective measure was the introduction of a transit tax for goods in the Prussian-Darmstadt area. The inefficiencies of this agreement led to the conclusion of the Einbeck Treaty with Hanover, Oldenburg and Braunschweig on March 27, 1830 , the basis of the later North German Tax Association, a measure that was also a hindrance to the general customs association. These steps were seriously damaging to trade and economy in the Electorate of Hesse. There were famines and riots in many places and at the national borders there were often violent clashes due to surreptitious trafficking, smuggling and the black market . (Already in August 1831, Kurhessen left the Central German Trade Association and joined the Prussian-Hessian Customs Association.)

The revolution of 1830 broke out with particular vehemence in Kurhessen. At first, however, there was an almost immediate, at least temporary, settlement between Wilhelm and his son and between the elector and the people. In July 1830 Wilhelm traveled to Vienna to obtain the imperial prince status for his mistress. However, since Metternich avoided him, Wilhelm returned to his lover in Karlsbad without having achieved anything . There he fell seriously ill. Prince Elector Friedrich Wilhelm hurried to the sickbed and made up with his father. The people of Kassel sent a delegation to Karlsbad. On September 6th, riots broke out in Kassel, which spread to other cities and rural regions in Hesse. On September 12, 1830, father and son moved into Kassel together.

On September 15, 1830, under massive pressure from the street, Wilhelm II received a delegation, led by Lord Mayor Karl Schomburg , consisting of the Kassel city ​​council and several deputies from the citizenship. They presented him with a petition in which they asked for the state estates to be convened, referring to the country's plight. The elector agreed to the calling and the drafting of a constitution . The convocation took place on September 19, and after the parts of the state not previously represented in the state estates, such as the former County of Hanau, were allowed to send delegates, the state parliament met on October 16. The Electoral Hesse constitution of 1831 that he worked out was enacted on January 5, 1831 and promulgated on January 8. It was considered the most liberal within the German Confederation and even the most progressive in Europe - with a unicameral parliament and the possibility of ministerial indictment , a forerunner of the parliamentary responsibility of the ministers appointed by the monarch.

However, after giving in on the constitutional question, Wilhelm II misjudged the situation with regard to his position in public. He allowed Countess Lessonitz to return to Kassel. Their arrival coincided with the public jubilation over the new constitution, and on January 11th caused renewed riots with loud calls for their departure. The Countess then fled, and the Elector and his court followed her to Hanau in March , where he took up residence in Philippsruhe Castle and in Wilhelmsbad at the gates of Hanau. Since governing from Hanau (the ministers had stayed in Kassel) proved to be technically difficult with the communication options at the time, the elector transferred on September 15, 1831, for the duration of his absence from the capital, to his son Friedrich Wilhelm with the title of co-regent the affairs of state. Since he never returned to Kassel, this was in fact an abdication .

Wilhelm II now lived on his ample income together with Countess Reichenbach-Lessonitz, initially in Philippsruhe Palace and later in Frankfurt am Main . After the death of Electress Auguste on February 19, 1841, he married the Countess on July 8, 1841 in Bisenz in Moravia. When she died on February 12, 1843, he married Karoline von Berlepsch on August 28, 1843 , whom he elevated to baroness and later countess of Bergen . This third and final marriage remained childless.

After his death, Wilhelm II was buried in the crypt of the Marienkirche in Hanau. Since the grave was badly damaged in a bombing raid during World War II, the remains of it were buried in a new coffin in the 1990s.

Thanks to inter-family marriages, King George II of Great Britain and his wife Caroline are two-time great-grandparents of Wilhelm II of Hessen-Kassel.