Archaeological investigations , which began in 1932 with excavation work with the use of the Reich Labor Service in the area of ​​the castle and were led from 1933 under the scientific supervision of Gotthard Neumann and Erwin Schirmer (both Germanic Museum of the University of Jena ), showed that the area was in the lowlands of the Sulzbach northwest of today's village Kapellendorf was already settled in the early Bronze Age. In the kennel area, ceramics from the Aunjetitz culture were found. The majority of the finds and findings, however, come from the Middle Ages , altogether almost 1000 kilograms of medieval ceramic, glass, metal and bone finds were recovered from the earth moving across the entire site.

The place Kapellendorf in the early Middle Ages

The place Capelladorf is mentioned as early as 833 in the deeds of donation of the Fulda monastery . The donor was a Count Asis, - not a Count Hessi in 875, as is often incorrectly claimed - an extraordinarily powerful man in Thuringia, who held a county granted by the king as well as freely disposing of extensive property such as in Kapellendorf. According to the Fulda death annals, in which his name is prominently entered, Asis died in 837. From historical tradition it can be concluded that there was a church in Kapellendorf, which may have already been founded by the ancestors of Count Asis and his brothers. but not that this family was also based in the village - as older research always assumed. In addition to extensive property in the Weimar and Erfurt area, the family also had goods in southern Thuringia and Franconia , in the area around Hildburghausen and Gotha .

A wooden tower hill castle from the 8th to 10th centuries, postulated early and mostly still today and even reconstructed as a model as a model in 1961 , is a learned invention with which a continuity to the early mention should be established. There are no findings and finds that would allow statements to be made about an early tower hill castle. Only a few readings from the 11th century from an area near the church in the village indicate the existence of an unfortified settlement at this point.

The next mention of Kapellendorf is only from the year 1182. In a transfer of ownership to the Cistercian monastery Altzelle , which was carried out by Landgrave Ludwig III. was confirmed in a document by Thuringia , a Theoderico de Capellendorph was involved. He belonged to a noble family who were in the service of the empire as burgraves of Kirchberg near Jena and who first appeared in the sources in 1149 with the name de Kyrberch . A connection between this family and Count Asis, mentioned in the 9th century, is very unlikely. According to the research results of Wolfgang Hartmann , the nobles from Kirchberg and Kapellendorf could be members of the noble family of Reginbodones . 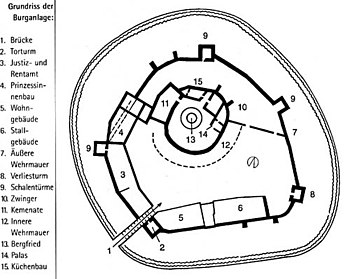 During the excavations in 1933, large parts of the first stone fortification from the second half of the 12th century could be explored. It is an almost circular castle complex of 32 meters in diameter, which was surrounded by a 1.80 meter thick curtain wall and a moat . In the north-east of the complex, the remains of the Romanesque residential building have been preserved, which was directly leaned against the circular wall. In the center of the castle, the lower part of a free-standing donjon with an outer diameter of ten meters, which was razed again by the end of the 18th century, was exposed. The use of humpback blocks , which are relatively rare in the Thuringian-Saxon region, is striking. The keep was probably built in the late 12th or early 13th century, probably only after the construction of the curtain wall and the peripheral development or even after a certain time lag. The date mostly given so far "probably not before 1120 and not later than 1180-1200" is not mandatory and appears too early. The water supply was ensured by a castle well examined to a depth of 10.80 meters and a cistern . The four-meter-deep filter cistern presumably absorbed the rainwater that flowed down from the palas roof.

The decline of the burgraves of Kirchberg began as early as the 14th century with the destruction of the three castles on the Hausberg near Jena (1304). On July 13, 1348, Burgrave Hartmann von Kirchberg even had to sell the Kapellendorf headquarters to an intermediary in the city of Erfurt due to financial difficulties . In 1350, the city acquired several villages in the surrounding area, two years later also the judicial rule, and then let King Charles IV lend part of the rule of Kapellendorf to it as an imperial fief . This was followed by the establishment of an official seat and a significant expansion of the castle complex. The building stock of this expansion phase in the second half of the 14th century has largely been preserved to this day. These include the five-story residential tower , the so-called Kemenate , and the kitchen building with a large fireplace ("ox roast kitchen") in the center of the castle complex.

The castle was significantly expanded by the construction of an approximately pentagonal outer bailey ; it now covered an area of ​​2.25 hectares. It is surrounded by a moat up to 30 meters wide, which originally had a wall in front of it, so that the total diameter of the castle complex was around 180 meters. On the north side, this pre-fortification is well preserved to this day, in the east and south-east only small remnants indicate its former course. On the main attack sides in the south and east, two high and closed flanking towers with slit slits were built on the new circular wall, the three other corners only occupied by shell towers. The original entrance to the outer bailey was in the south, and the Gothic portal can still be seen clearly in the masonry. Several residential and farm buildings are attached to the new curtain wall, but their shape is mostly from more recent times. The city of Erfurt stored large amounts of weapons, armaments and war material as well as food in the castle, which are listed in detail in an inventory from 1392.

The castle under the "robber barons" of Vitzthum

In 1446 the people of Erfurt entrusted the protection of their merchants in the area around Kapellendorf to the knight Apel Vitzthum von Roßla and handed over the castle and office to this office for 21 years. In doing so, however, they had made “the goat to the gardener”, because together with his brothers Busso and Bernhard, the apel victum, who had fallen out of favor at the Saxon court, turned against Landgrave Wilhelm III. of Thuringia and attacked Erfurt and other merchants several times. When an embassy from the Duke of Burgundy was on the way in October 1451 because of a planned marriage to the Saxon Elector Frederick II the Meek , it was attacked by the Vitzthum brothers , plundered and taken prisoner to Kapellendorf. The Saxon dukes, together with the cities of Erfurt , Sangerhausen , Mühlhausen and Nordhausen and the surrounding nobles, conquered the castles of Viztume Wachsenburg, Kapellendorf, Gleisberg (Kunitzburg), Dornburg, Leuchtenburg, Isserstedt, Camburg and others. Around December 30, 1451, the sloz Cappilndorf , in which part of the Burgundian councilors were held, was surrendered after an eight-week siege due to a lack of food and ammunition, and the defenders were granted free withdrawal.

The moated castle in the early modern era

In exchange for the Wachsenburg , Kapellendorf came back into the possession of the city of Erfurt in 1452. Due to pressing financial hardships, the town council of Kapellendorf had to pledge to Elector Friedrich the Wise and Duke Johann von Sachsen in 1508 , which gave rise to an uprising - the so-called Great Year of the Erfurt citizens against their advice. In the second half of the 16th century, the gate was relocated to the tower in the southwest and a stone bridge was built over the moat. In the following centuries, the castle experienced several partial destruction by fires such as 1599 or storms in 1613, but also phases of rebuilding such as after the establishment of a justice and rent office in 1684. The humpback square tower, which is still at a considerable height on a pen drawing from 1657 , was demolished in the second half of the 17th century and in the 18th century down to the residual stump and the stones were brought to Weimar together with other demolition material to be built there. In October 1806 the Prince of Hohenlohe- Ingelfingen set up his headquarters in Kapellendorf Castle as commander-in-chief of part of the Prussian army in the battle of Jena and Auerstedt against Napoleon's troops . From 1866 to 1879 the University of Jena housed its "insane asylum" in the castle. Then the village school moved in.

The castle in the 20th century and today

The Grand Dukes of Saxe-Weimar-Eisenach remained in the possession of Kapellendorf until 1918. In 1922, the Thuringian state government sold the castle to a private citizen, and in 1929, after more than 400 years, it came to a citizen of Erfurt. In 1930 the “Burggemeinde Kapellendorf” founded by the Erfurt History and Archeology Association became the owner of the castle and in 1932 began to uncover and secure the complex for tourist use. The leadership of the castle community was Professor Dr. Johannes Biereye took over. At the time, the castle was almost completely in ruins.

In 1933, the castle community brokered the purchase of the castle by the city of Erfurt and contributed significantly to the renovation of the attractive complex.

By 1935 it was possible to prepare the buildings on the south and west sides so that usable rooms were created. Furthermore, work to secure the bower was carried out in the 1930s and the lair tower was reconstructed.

From 1943 the documents of the Erfurt City Archives and the holdings of the Erfurt General Scientific Library were relocated to the moated castle as protection against the increasing air raids.

Expansion and restoration were promoted in the GDR by the "Working Group Wasserburg Kapellendorf". This working group included Hanns Feldmann commissioned by the city of Erfurt, the architect Dr. Karl Fleckner and the history teacher Karl Moszner. They took care of extensive renovations and a redesign of the castle museum. Among other things, the roof of the bower and the roof of the Prinzessinenbau were re-covered and the medieval fireplace kitchen was saved from decay. In 1975 an exhibition on the castle and city in the Middle Ages was opened in the "Kemenate" of the Kapellendorf moated castle. Since 1998 the castle has been owned by the Thuringian Palaces and Gardens Foundation and houses a museum run by the city of Erfurt and showing changing exhibitions. The castle also serves as a venue for various festivals, theater performances and children's projects.

Objects of the Thuringian Palaces and Gardens Foundation