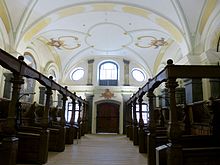 Horse stalls in the stables of the Salem Imperial Abbey

The Marstall located in Drogosze and belonging to Dönhoffstädt Castle in 2017.

Marstall (from Old High German marahstal , composed of marah 'horse (mare)' and stal ' stable ') was originally a name for a prince's horse stable. In today's parlance, the term Marstall is used for stable constructions of castles and manor houses , which were executed in representative architecture from the early modern period to the 19th century. The term can also denote the totality of all horses of a prince.

The princely stables included the buildings for horses , wagons , carriages and dishes . Depending on the size of the property, Marstall can take on considerable proportions and form their own building complex . Especially in the Baroque period , the stables were lavishly executed. A covered was connected to the royal stables often riding hall (contemporary as Reithaus called) for the Riding School .

The royal stables were usually headed by a high, noble official of the court. In the hierarchy of court posts, he was mostly placed between ranks 4 and 8. Often this task was a representation activity; the actual daily work was incumbent on non-aristocratic leaders. The designation of the position varies: “ Marstaller ” (Württemberg), “Oberstallmeister”, “Oberststallmeister” or “Großstallmeister” were common.

In Austria, the name Marstall for the former court stables in Vienna (which today form the MuseumsQuartier) is not common, but occasionally for the prince-archbishop's court stables in Salzburg (today the festival halls).

Numerous historical royal stables in Germany were converted for a new use from the 19th and 20th centuries after their original function as part of a princely court was no longer applicable. Representative architecture, building size and central location made the buildings particularly suitable as a seat for public institutions. Today, archives , libraries or authorities can often be found in the converted stables. Based on their earlier function, some of these converted buildings have retained the name Marstall. The original use as a horse stable can be viewed, for example, in the Princely Riding School in Bückeburg.