Rotenburg on the Fulda

Rotenburg an der Fulda (officially Rotenburg ad Fulda ) is a small town in northeastern Hesse and is located on the Fulda River in the Hersfeld-Rotenburg district .

Historic row of houses in Rotenburg (an der Fulda)

The city is located south of the Stölzinger Mountains in the narrowest area of ​​the Fulda valley . The lowest point is 180  m above sea level. NN in the area of ​​the two Fulda bridges ("Old Fulda Bridge" and "Bridge of the City Partnerships"). The highest point is 548.7  m above sea level. NN high Alheimer , which lies on the boundary between the city and the municipality of Alheim .

Nearby cities are Bebra about 6 km southeast and Bad Hersfeld about 16 km in the south. The next larger cities are Kassel, about 50 km to the north, and Fulda, about 60 km to the south .

The neighboring communities, starting from the north, are Alheim , Spangenberg , Cornberg , Bebra and Ludwigsau . On the so-called " Stölzinger Höhe ", in the northeast above the Dankerode district, Rotenburg shares a border with the town of Waldkappel .

The core city lies on both sides of the Fulda, connected by four bridges. Of these, the Twinning Bridge is the only fully-fledged road bridge. The old town also consists of two parts, only connected by the Alte Fuldabrücke near the castle , which is used for cyclists, pedestrians and residents. The other two bridges are on the outskirts and are purely pedestrian bridges. The districts of Lispenhausen , Braach , Schwarzenhasel , Erkshausen , Seifertshausen , Dankerode , Atzelrode (with Gut Alte Teich and Wüstefeld) and Mündershausen belong to Rotenburg an der Fulda .

Landgrave Castle in Rotenburg, front view of the central building

In the nomenclature of goods Breviarium Sancti Lulli of the monastery Hersfeld of 769 villages (now neighborhoods) Braach, Lispenhausen and Breitingen desolate lying (memorial stone in the area of allotment gardens, tennis courts) were mentioned for the first time. These villages consisted of six manors and 90 acres of land.

The Gisonen were bailiffs of the Hersfeld Abbey . They built their first security castle in the Fulda valley when they succeeded in taking possession of the bailiwick. A settlement was built around this castle. The Thuringian Landgraves , who came into the possession of the Vogtei through inheritance after the Gisonen, built the Rodenberg Castle on the Alter Turm mountain , which is still visible today in ruins and from whose name the city name was probably derived.

The settlement on the left Fuldaufer, today's old town, was first mentioned as a city in 1248 and after the Hessian-Thuringian War of Succession in 1264 the city belonged to the Landgraviate of Hesse . The old Talburg, on the side of the old town, is said to have been demolished after 1423. The first Rotenburg Castle was built in 1470 . A big fire in 1478 destroyed the old town and the recently built castle. From 1627 to 1834 Rotenburg was the seat of the landgrave's branch line Hessen-Rotenburg , the so-called Rotenburger Quart .

Rotenburg on an engraving by Matthäus Merian from 1655; far left is the keep of Rodenberg Castle

In 1615 57 houses burned down in Braach, and during the Thirty Years War in 1637 the town and the town hall were burned down by soldiers from the Isolani regiment .

In March 1882 the volunteer fire brigade was founded as an association; In 1900 it was given a fire station with a hose tower near the Fulda.

During the Second World War was Rotenburg location of a POW camp for officers, the Oflag IX A / Z . A troop leader school for the Reich Labor Service was set up in the former Landgrave's Palace.

Rotenburg was the district town of the old district of Rotenburg until 1972 ; since 1972 it belongs to the district of Hersfeld-Rotenburg . In 2003, the city gained fame through the criminal case of Armin Meiwes .

In 2004 the city received a silver medal in the national competition “ Our city is in bloom ” and in the following year 2005 a gold medal and a special prize for the design of the renatured landscape in the Fulda floodplain .

In August 2007, the city's volunteer fire brigade organized the 20th Hessian Fire Brigade Day on the occasion of the 125th anniversary of its founding.

The area of ​​the city of Rotenburg today belongs to the Evangelical Church of Kurhessen-Waldeck and the largely congruent Catholic diocese of Fulda . Landgrave Philip the Magnanimous introduced the Reformation in the Landgraviate of Hesse after the Homberg Synod in 1526 , and the city has been mostly Protestant since then. Rotenburg is the seat of the Evangelical Church District Rotenburg.

There are ten Protestant parishes in the city.

The two Catholic churches are:

who belong to the parish of St. Franziskus Bebra-Rotenburg in the diocese of Fulda.

There is also a New Apostolic congregation.

On December 31, 1971, the formerly independent communities Atzelrode (with the Wüstefeld residential area), Braach (with the Grundmühle) and Mündershausen were incorporated as part of the regional reform in Hesse . On August 1, 1972, Dankerode, Erkshausen, Lispenhausen, Schwarzenhasel and Seifertshausen were added. All of these former communities are now districts of Rotenburg an der Fulda.

According to the Hessian municipal constitution, the mayor is chairman of the magistrate , which in the city of Rotenburg includes eight voluntary councilors in addition to the mayor . Christian Grunwald (CDU) was elected as the new mayor on September 25, 2011 with 59.5% of the vote. He replaced the long-time mayor Manfred Fehr (SPD).

On September 24, 2017, Christian Grunwald - the only candidate - was re-elected for a further term. 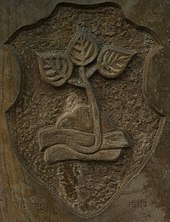 Blazon : "In silver a red three-mountain , on it a horizontal green branch, from which a curved green branch with three linden leaves grows." Meaning: The coat of arms dates from the early 17th century. The mountain stands for the Rotenberg, on which a castle stood. The city takes its name from this. The linden branch comes from older guild seals on which a clover leaf and a star were depicted. This gave rise to the linden branch, which was incorporated into the city arms. It thus belongs to the North Hessian cloverleaf family of coat of arms like Kassel and Felsberg. The first representation of the current form can be found in the knight's hall , which was demolished at the end of the 18th century. See Wilhelm Wessel 1623: "Follow the coats of arms of all cities in principalities and graffships of the princes of Hesse as they can be found in Rotenbergk in the Princely Castle / in the great hall." The first images on the medieval town seal show a saint carrying a palm branch a city gate. It is probably the city patron St. James the Elder . 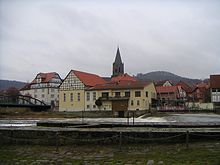 Neustadt with the Fulda weir at high water; in the foreground the lock from the 16th century

We have friendly relationships with the following cities :

The main attractions of the city are:

Lock on the Fulda from the 16th century; the lock on the right

Since October 2011 the radio crime scene produced by the Hessischer Rundfunk has been playing in Rotenburg an der Fulda. 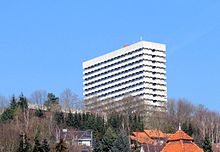 The cardiovascular center (HKZ) , located on a south-facing slope above the city, is of particular importance for the city and the whole surrounding area .

Rotenburg is on federal highway 83 .

The former Rotenburg an der Fulda train station is on the Bebra – Baunatal – Guntershausen railway line and is now just one stop . The station building from 1847/48 was designed by Julius Eugen Ruhl .

The following cycle paths lead through the municipality :

Wikinews: Rotenburg an der Fulda  - in the news

Municipalities in the district of Hersfeld-Rotenburg

Districts of Rotenburg an der Fulda