Waldkappel is a small town in the Werra-Meißner district of North Hesse in Germany .

Waldkappel lies between Hessisch Lichtenau in the west and Eschwege in the east. It is located in the East Hessian mountains between the geo-nature park Frau-Holle-Land (Werratal.Meißner.Kaufunger Wald) in the north and the Stölzinger Mountains in the south at the mouth of the Schemmerbach in the weirs .

Waldkappel lies at the intersection of the line connecting the Zipfelbund communities .

In addition to the core town of Waldkappel, the city ​​consists of the following districts: 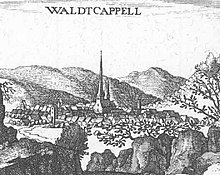 Waldkappel - Excerpt from the Topographia Hassiae by Matthäus Merian 1655

Waldkappel was first mentioned in a document in 1226. 1301 owned the von Kappel goods and jurisdiction in the place. In 1414 the town was granted city rights. The city experienced its economic boom during the late Middle Ages due to its location on the old trade route "through the long Hesse" , which led from the Wetterau to Thuringia and on to Leipzig . As a sign of the city's former wealth, the late Gothic church rises in the center of the village. On the trip to the Marburg Religious Discussion with Ulrich Zwingli, Martin Luther stayed overnight on 27/28. September and 6./7. October 1529 in Waldkappel. The Thirty Years War brought Waldkappel's prosperity to an abrupt end; the city could never build on its former importance.

The town of Waldkappel did not belong to any office, but there were special mayors of the Ganerbe. It was not until 1780 that the judicial officer in Bischhausen was commissioned to take care of the administration of justice . During the French occupation, the place belonged to the canton of Bischhausen in the Kingdom of Westphalia (1807-1813). From 1821 Waldkappel belonged to the Hessian district of Eschwege .

In 1945, 17 people were killed in an air raid on an ammunition train and the station was completely destroyed.

Since 1974 the place belongs to the Werra-Meißner-Kreis .

As part of the regional reform in Hesse , the previously independent municipality of Mäckelsdorf was incorporated on February 1, 1971. On October 1, 1971, Burghofen, Friemen, Rechtebach and Rodebach were added. Bischhausen, Gehau, Harmuthsachsen, Hasselbach (both from the district of Witzenhausen ), Kirchhosbach, Schemmern and Stolzhausen from the district of Melsungen followed on December 31, 1971. With the incorporation by virtue of the state law of Eltmannsee and Hetzerode, the series of incorporations became on January 1, 1974 completed.

The Waldkappels Catholics belong to the diocese of Fulda and are assigned to the St. Michael-Werra-Meißner pastoral group in the Eschwege-Bad Hersfeld deanery .

The Catholic Church Parish Curate Church St. Elisabeth is located at Werenfriedplatz 1, 37284 Waldkappel. The Marienheide monastery in Wollstein is also part of the parish.

In Harmuthsachsen-Wollstein is the Marienheide monastery belonging to the Bethlehem Sisters .

Waldkappel has partnerships with the French city of Carhaix in Brittany and with the Dutch municipality of Rijnwoude .

Municipalities in the Werra-Meißner district