The title of this article is ambiguous. Further meanings are listed under Kanonenbahn (disambiguation) .

This article or section needs to be revised:
The verbatim citations require evidence.
Please help to improve it and then remove this marking.

As Kanonenbahn which is military strategic railway line from the German capital Berlin on Güsten , Wetzlar , Koblenz and Trier to Metz in France referred. At that time, Metz was part of the German Empire , since after the Franco-Prussian War of 1870/1871 France had to cede the realm of Alsace-Lorraine to Germany. The railway line was then created to efficiently connect the new territory to the Imperial and Prussian capital Berlin. Existing state-owned railway lines were also used.

Other railway lines that were built primarily for military strategic reasons, such as B. the Glantalbahn , are colloquially referred to as "Kanonenbahn". The Berlin – Metz connection is the best known of them.

"Kanonenbahn" is not an official name. It has become popular in the vernacular .

There are a number of other names for the route or sections of it:

In the Berlin and Brandenburg area, the name Wetzlarer Bahn for the line from Berlin in the direction of Bad Belzig and Wiesenburg has been known since the line was built and is still common today.

“As far as the means of transport are concerned, Berlin now has 14 railways in addition to very busy shipping traffic on the Spree and the Landwehr Canal: Lower Silesian-Märkische, Ostbahn, Stettiner, Nordbahn, Hamburger, Lehrter, Wetzlarer [Berlin – Blankenheim], Potsdam-Magdeburg, Anhaltische , Dresdener, Görlitzer, Military Railway, the Stadtbahn and the Ringbahn ”(excerpt from Meyers Konversations-Lexikon , Vol. 2).

Here is an excerpt from a Berlin publication by the secret building councilor Houselle:

“In place of the 'Südwestbahn', another line was taken as a western continuation of the light rail. At the beginning of the seventies a direct train Berlin – Frankfurt a. M. planned. In the summer of 1872, however, it was already announced that the state wanted to take charge of this building, and that Metz instead of Frankfurt a. M. is considered to be the end point of the railway company. In addition to the Moselle Railway, the shortcuts needed to create a direct railway connection from Berlin via Nordhausen to Wetzlar had to be built, for which the 'large railway bill' submitted to the House of Representatives in December 1872 provided 152,250,000  M. This construction was approved by the law of June 11, 1873 and by the highest decree of July 2, 1873 the execution of the systems for the Berlin-Wetzlar lines in Berlin and on the Berlin-Charlottenburg route of the direction of the Lower Silesian-Märkische Eisenbahn, the Execution of the part of the Berlin-Wetzlarer Bahn from Charlottenburg to Nordhausen but assigned to a commission assigned to the direction of the Royal Eastern Railway (from August 15, 1873). "

- Berlin and its buildings (1896) - The locomotive railways

It is likely that other official, regionally different names were also used, corresponding to the four railway departments that were responsible for the construction management in sections. For example, the official tenders for railway construction in Eichsfeld were also known as the Berlin-Coblenz Railway. For example, in an advertisement in the “Obereichsfelder Kreisanzeiger” dated October 14, 1876. The initials “BCE” can still be found there on benches and chairs at train stations and various buildings.

For the official opening of the Wetzlar – Lollar section , the Royal Railway Direction published an announcement in the Wetzlarer Anzeiger on October 13, 1878, in which there was talk of a Berlin-Wetzlar railway, a Wetzlar line and a Berlin-Metz railway. 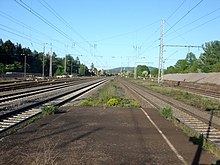 As a strategic railway those routes are called, which were built of military-strategic reasons, without regard to economic or civilian traffic importance in peacetime. Certain design parameters such as curve radius, slope and load must be adhered to. They were planned as double-track routes with the aim of avoiding metropolitan areas as far as possible .

Interest in a continuous railway connection was signaled very early on by the military. For example, as early as 1855 there were private demands on the Prussian Minister for Trade, Industry and Public Works for a railway line from Koblenz through the Moselle valley to Trier. Economic reasons were cited: "For a railroad from Trier downwards, there is not only the plaster of paris from the Trier area, which is already being sent to the Rhine , but also roofing slate and cheap and benign iron stones."

In the reply, two weeks later from the Upper President of the Rhine Province on August 31, 1855, it says: “The Royal Ministry of War has repeatedly pointed out the military importance of a railway from Coblenz to Trier and urgently advocated the promotion of such a connection. A Coblenz-Trier railway appears to be a natural continuation of the great railway line from Berlin via Halle, Cassel, Gießen, Wetzlar and Coblenz in a south-westerly direction to the border of the monarchy and at the same time, which is politically important, would include the most remote parts of the Middle Rhine region put the old provinces and the centers of the state in direct contact. ”But it took at least 15 years before the project became more concrete.

By 1871 at the latest, there were first considerations about the strategic construction of the Kanonenbahn, the route of which was largely of little or no civil traffic importance and ran away from the metropolitan areas. Private plans to build the railway were rejected; With the money from the French reparations payments , the state then also had the financial means to build uneconomical, but strategically important routes. On June 12, 1872, the "Association for the Establishment of a Direct Railway from Berlin to Frankfurt am Main" applied for a license to the Prussian Minister for Trade, Industry and Public Works. This request was rejected just 14 days later on the grounds that "the government intends to establish a direct connection between the eastern and western state railway complex and thus also between Berlin and Frankfurt am Main for state accounts". As early as 1872, for example, in the Lollar- Wetzlar area, the planned route was marked out by geodesists and engineers.

On December 18, 1872, the Prussian state government submitted a draft for the construction of a Berlin – Wetzlar railway in the House of Representatives. With the law of June 11th, 1873 (the so-called "Kanonenbahngesetz"), the construction of the railway was decided to use money from the French reparations payments for the extension, completion and better equipment of the state railway network , concerning the taking up of a loan of 120 million  Thalers And the authorization to issue bonds for the Kanonenbahn was made. From 1875 the connection was expanded by the Prussian state .

The entire route has a length of about 805 kilometers, of which about 511 kilometers were built under the cannon railway law. These are mainly the Berlin – Blankenheim line (Wetzlar route or Wetzlar line), the Leinefelde – Treysa line and the Koblenz – Trier – Diedenhofen line . There were also two short new sections, the Lollar – Wetzlar railway line and a new connection from Hohenrhein to Koblenz across the Rhine. Existing routes were used on the remaining sections, including the main line Halle (Saale) - Hann. Münden , the Thuringian branch line Leinefelde - Gotha , the Main-Weser-Bahn , the Lahntalbahn and the French Eastern Railway .

The Kanonenbahn project also included the expansion of these existing routes such as B. the double-track expansion of the Lahn Valley Railway . Overall, the realized cannon track can be divided into 24 individual sections based on the opening dates. These are the

Four Royal Railway Directorates (KED) and the Imperial General Directorate of Railways in Alsace-Lorraine were responsible for the construction management of the cannon railway :

The line was completed in 1880–1882. During the planning and construction period, Prussia increased its takeover of the large main railway companies that were combined in the Prussian State Railways . One of the main reasons for the construction of the line, the independence from the private railway companies, was no longer applicable when it was completed or shortly after it was completed. The route chosen for strategic reasons also turned out to be an obstacle to traffic demand far away from the conurbations. The entire route has never been of greater importance for through traffic. In some places it was possible to dispense with the originally planned double-track expansion. In the period that followed, the individual sections of the route developed very differently. Some sections of the route, such as Berlin – Wiesenburg or Koblenz – Trier, were used for heavy through traffic, others were only of local importance (for more details see the articles on the individual routes).

Funeral wreath on the route on the occasion of the closure in the Küllstedt area , west of Leinefelde-Worbis

The Treysa – Leinefelde section was interrupted by the inner-German border between Schwebda ( Hesse ) and Geismar ( Thuringia ), which reduced the importance of the Hessian section. In 1974, passenger traffic on the Malsfeld - Waldkappel section was discontinued, followed by closure and dismantling there and on other Hessian sections. After 1990, sections in Thuringia were also discontinued and subsequently shut down.

At the present time, efforts are being made in many places on disused sections to preserve the route and its structures. Sometimes, however, sections are also used differently, such as B. at the Living Bee Museum Knüllwald .

There is still a street called An der Kanonenbahn in Treysa, Hesse , and a Kanonenbahn hiking trail in the Moselle region . There is a Kanonenbahn cycle path in Thuringia and Hesse .