The title of this article is ambiguous. Further meanings are listed under Wittlich (definition of terms ) .

Wittlich an der Lieser is the district town of the Rhineland-Palatinate district of Bernkastel-Wittlich and the seat of the Wittlich-Land community . With around 19,500 inhabitants, Wittlich is the largest city between Trier and Koblenz and a medium-sized center .

The city is located in the southern Eifel on the Lieser in a side valley of the Moselle on the northern edge of the Wittlich valley . This landscape is limited to the west by the Moselle Eifel and to the east by the Moselle valley .

(Source under: The mentioned local districts were independent municipalities until June 7, 1969.)

View from the Fintenhügel over the city of Wittlich

The oldest known remains of human settlement activity date from the 3rd millennium BC. In Roman times there was a stately villa rustica directly on the Lieser, under today's motorway bridge .

Wittlich was first mentioned in writing in 1065.

The construction of the archbishop's castle Ottenstein on today's Schlossplatz was completed in 1428. Elector Johann Philipp built a second pleasure palace in 1763, called Philippsfreude .

In the Electorate of Trier , which existed until 1803, the Wittlich office formed an administrative district. After the French era , Wittlich became the seat of the mayor's office in Wittlich and the Wittlich district .

In 1912 the first German juvenile prison was built in Wittlich , which is still adjacent to the Wittlich correctional facility .

On November 9, 1974, the RAF terrorist Holger Meins died in the prison in Wittlich as a result of a hunger strike.

In 2009 the city of Wittlich was included in the Active City Centers program of the State of Rhineland-Palatinate.

The following table shows the development of the population in the area of ​​the city. People from 86 nations live in Wittlich. The proportion of foreigners is 15% (Germany as a whole 22%, Rhineland-Palatinate 10%).

Social and economic development in the 19th century

The social and economic development before and during the industrialization in Wittlich was characterized by population growth, emigration and social welfare due to increasing poverty.

The growing population consisted largely of poor people. Therefore the "Wittlich Association" (1817) was founded to combat starvation. The first institutionalized implementation of poor relief in the town of Wittlich came from a Wittlich women's movement that offered help to the poor by donating food and money to them. On January 17, 1832, a "poor cooks institution" was established in Wittlich (comparable to the Wittlich table ).

Due to poor harvests (1846/47), compulsory military service, poor living conditions and future prospects, lack of work, high taxes and disadvantages for many Moselle winemakers, emigration from Wittlich increased from the middle of the 19th century. The destinations of emigration were America, Russia, Romania or North Africa (Algeria). It was almost exclusively the middle class who could afford to emigrate, as this was associated with high costs and security. In the years 1840–1871, 2133 overseas emigrants were recorded.

In addition, there were a large number of major projects implemented, such as the district hospital (1900) and the penal institution (1902). [TH1]

During the 19th to the beginning of the 20th century, Wittlich was shaped by the markets of the agricultural and rural population. In this way, local interests were largely covered. In the following course of the entry, the most important and internationally and regionally recognized companies Wittlich are presented.

In the course of the development of railways throughout Germany, discussions have been held since the 1850s about a Moselle railway (Moselle route) from Koblenz to Trier and a hoped-for railway connection to the city of Wittlich.

During the Franco-Prussian War of 1870/71 , the lack of this connection was perceived as serious and the plans were made more concrete. The plans presented in August 1871 were perceived as a negative surprise in Wittlich, as the Moselle Railway was to pass Wittlich between the then independent village of Wengerohr and Platten .

As a result, the Wittlich city council wrote a large number of petitions and submissions to the Reich government and the Reichstag in order to achieve a direct connection between the city and the Moselle route. However, with reference to the higher costs associated with overcoming a greater height difference, these were unsuccessful.

In 1879 the Mosel line Koblenz-Trier was opened, the closest train station for Wittlich was, as it is today, on the edge of Wengerohr.

As a result of the persistent lobbying for a direct connection to Wittlich, the following sections of a branch line from Wengerohr were opened in the following years (closed since the 1980s):

Industrialization in the 20th century

The Merrem & Knötgen press factory was founded in Wittlich in 1898 by the partners Joseph Merrem and Matthias Knötgen and initially dealt with the manufacture of steam sawmills and the production of horizontal frame saws . They also tried to structure the public electricity network and supplied some private households until the city of Wittlich saw them as competition. The company then focused on the manufacture of wine and fruit presses , machines, steam engines as well as hay tedders, slurry pumps and their repairs.

The entrepreneurs achieved their greatest success through the pressing , where they also achieved the greatest export successes . New machines such as screw presses made their work easier and made it possible to meet the large demand. A total of 28 of the company's systems were put into operation across Germany. For their outstanding commercial achievements, they received the bronze state medal in 1912 and the gold medal in Budapest in 1914 . Through its international company representatives such as B. in Buenos Aires they achieved world renown as the first company and were an important economic factor in Wittlich, which offered numerous jobs.

In 1917 the factory was sold to the press specialist Julius Heiden. Merrem & Knötgen survived both world wars until they were closed in 1975 for health reasons.

The Wittlich wood industry was an important branch that contributed to the industrial boom in Wittlich. Since the 1910s there have been many reports about the development of a timber industry, which have become more and more concrete. Dr. Baltz, the chairman of the Association for Industrial Development in the South Eifel, also followed the development of the company Hausmann, Holzindustrie from Blomberg , which was built on the left side of the Wittlich-Daun railway line. The topping-out ceremony was on December 13, 1913. The wood industry was engaged in the production of plywood, which was important for building and furniture joinery. The company was sold several times and was represented at the trade fair in Trier in 1925. At the end of the 1920s, the Wittlich wood industry got into financial difficulties, so that in 1929 a settlement procedure to avoid bankruptcy was opened, which the Wittlich District Court overturned. There are no other sources about the further course of the wood industry in the 1930s, but it is known that the company developed into the largest Wittlich factory and the largest employer at the end of the 1930s.

A prominent factor of industrialization in Wittlich were the wood and sawmills , which dealt with wood trade, wood drying, wood processing and wood products. Notable companies included Hubert Becker's sawmill and planing mill, which was founded in 1889 and thus belonged to one of the oldest wood processing companies in the city of Wittlich. A little later, on April 16, 1920, the "Wittlicher Holzwerke" GmbH was founded, which, until its final dissolution on April 6, 1926, was released for sale or auction several times.

As a small entrepreneur, the Jewish citizen Salomon Ermann-Bach founded a company for the production of lubricating and shoe greases on January 31, 1884. In the first 25 years the success was only moderate, but in 1909 the company expanded and applied for a newer and larger factory site on the lime tower. Despite the stagnation of the company, the concrete planning of the production facility began immediately after the First World War . The new facility was probably completed in 1921.

The company gradually grew to an international size, as their "Ermin Schuhwichse " was very successful and the factory expanded its production range. They took part in large trade fairs and expanded the factory area considerably in the years that followed. In 1926 the previous sole proprietorship was converted into a general partnership, in which Salomon Ermann-Bach, Josef Bach, as well as Otto and Alfred Ermann were involved. At this time, Alfred Ermann also made more trips to several European countries to advertise his products and to enlarge the company's sales radius.

Significant for Ermann & Co. is the invention of the " spring lid box", a tin box which was provided with a spring and which opened automatically when the closure was opened.

Despite its high profile, the company's owners were expropriated as part of the Aryanization of Jewish businesses in 1936. It was planned that the group should be leased for a fee, but the tenants broke the contract after a short time and payments did not materialize. Because of their Jewish origins, the owners were insulted in letters and even a court case did not result in any change. At the end of 1941, Alfred Ermann's account was also withdrawn by the National Socialists. After emigrating to the Netherlands, Alfred Ermann was murdered in the Sobibor extermination camp in 1943 .

In Wittlich, not only large and relatively well-known companies have a long tradition, but also medium-sized companies, which have driven and maintained industrialization in Wittlich through many small businesses, have contributed to the fact that the economy in Wittlich has remained constant up to the present day high level. Therefore, less well-known factories and businesses should also be mentioned at this point: 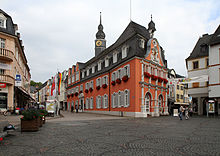 Old town hall on the market

House ensemble on the market square

The City Council of Wittlich consists of 32 members. This is the specified number for a municipality with a population between 15,001 and 20,000. The city council is elected for a five-year term in local elections.

The mayor is supported by three councilors, who are currently (as of 2019) Elfriede Meurer (CDU, 1st councilor), Elfriede Marmann (SPD) and Michael Wagner (Bündnis 90 / Die Grünen). 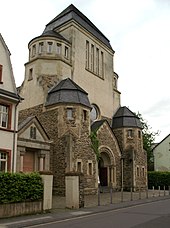 Since 2014, the first stumbling blocks by the artist Gunter Demnig on the property of the state of Rhineland-Palatinate, at the entrance to the prison, have been closed by the Georg Meistermann Society in memory of the Nazi victims see.

The Wittlich Fastnacht is organized annually by the two carnival associations Schääl Saidt e. V. and fools guild Rot-Weiß e. V. aligned. On the third weekend in August, the Säubrennerkirmes takes place, one of the largest folk festivals in Rhineland-Palatinate. The fair was launched in 1950 by the then mayor Matthias Joseph Mehs , but is based on the medieval Säubrenner legend . The largest Oktoberfest in Rhineland-Palatinate takes place every year in October. Since the summer of 2012, the Wittlich Beach Party has been held annually as an open-air club festival in the Stadtpark, and since 2018 under the name Beatville Festival on the Festwiese. The event tries to address adults and especially young people with the motto “For tolerance - against homophobia !”.

In Wittlich, 14,500 people find a job, based on the number of employees subject to social security contributions. Including civil servants and the self-employed, this number rises to over 16,000. The job density is 852 per 1,000 inhabitants and Wittlich is in the top group of cities in Rhineland-Palatinate.

Wittlich has an open channel (Offener Kanal Wittlich), which reports several times a week about current events from the municipalities, about events and the like. reported. 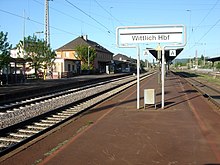 Districts or districts of Wittlich