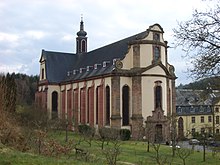 Großlittgen ( phonetic spelling in Eifel dialect : " Gruhssleehtchen ") in the Eifel is a municipality in the district of Bernkastel-Wittlich in Rhineland-Palatinate . It belongs to the Verbandsgemeinde Wittlich-Land .

The place was first mentioned in 912 as Lutiaco . In 1134/35 Bernhard von Clairvaux founded the Cistercian Abbey of Himmerod near the place . During the coalition wars, Großlittgen came under French rule from 1794. In 1802 the abbey was dissolved. Due to the treaties concluded at the Congress of Vienna in 1815, the area on the left bank of the Rhine, and thus the place, was assigned to the Kingdom of Prussia .

In 1922, the Himmerod monastery was re-established by German Cistercian monks from the Marienstatt Abbey in the Westerwald. Since 1946 the place has been part of the state of Rhineland-Palatinate .

The municipal council in Großlittgen consists of twelve council members, who were elected in the local elections on May 26, 2019 in a personalized proportional representation, and the local mayor . The twelve seats are divided between two groups of voters .

The honorary local mayor is Reinhold Graf, elected by the local council on October 16, 2019. His predecessor was Karl-Heinz Hubo.

The blazon of the coat of arms reads: "Under a silver shield head, inside a red bar cross, split by a curled golden tip, inside a black lion: on the right in red a silver sword, on the left in red two intertwined golden rings."

It was approved by the Trier district government in 1987 .

Sons and daughters of Großlittgen