Trarbach is a redirect to this article. For the German farmer and politician see Otto Trarbach .

Traben-Trarbach is a town on the Middle Moselle in the district of Bernkastel-Wittlich , Rhineland-Palatinate and the administrative seat of the association of the same name . The city is a state-approved spa and designated as a medium-sized center according to state planning .

Traben-Trarbach is located about 40 km northeast of Trier and about 60 km southwest of Koblenz in the valley of the Middle Moselle; north of the city is the Moselschleifenberg Mont Royal . The Hahn Airport in Hunsrück lies about 10 km (each a straight line ) from the east. The urban area extends over a total area of ​​3135 ha with a large proportion of forest. This makes Traben-Trarbach the largest city on the Middle Moselle in terms of area.

The Traben district is to the left of the Moselle at the foot of the former Mont Royal fortress and Trarbach to the right of the river on the Hunsrück side. While Traben lies on a large width on the banks of the Moselle, Trarbach stretches oblong between the rather steep mountains, especially into the Kautenbach valley. There is a spring in the Bad Wildstein district, the water of which emerges from the depths of the slate at a temperature of 33 ° and is used by a thermal bath .

Panorama of Trarbach (left), Traben (right) and the Moselle

Trarbach (foreground) with the Grevenburg and Traben (background); Aquatint by Karl Bodmer , around 1831 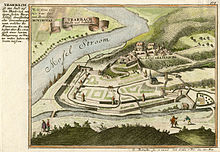 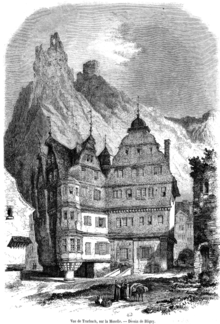 Trarbach around 1860; Wood engraving after Bligny

The Aacher Hof was mentioned in a document as early as 830. Emperor Ludwig the Pious (814-840), son of Charlemagne , gave Traben with all his righteous and appendages Traben, Litzig, Rissbach, Irmenach and Beuren to the cathedral of Aachen ( Aachen Marienstift ), in which the German kings were crowned.

Due to the affiliation to the rear county of Sponheim, the Reformation was introduced in Trarbach and Traben in 1557 , so that the place is predominantly evangelical to this day , even if the proportion of the Catholic population increased significantly due to immigration in the 19th and 20th centuries is. The leadership of the Protestant church in the Hinteren Grafschaft Sponheim was initially exercised by the Birkenfeld chancellery , then in 1672 a Lutheran consistory from Hintersponheim was set up in Trarbach , whose tasks were transferred to the consistory in Zweibrücken from 1776 .

All today's districts (with the exception of a part of Kautenbach) belonged to the Hinteren Grafschaft Sponheim , the main town of which was Trarbach even after the counts died out, although the two ruling lords (the county was a Palatinate-Baden condominium ) resided elsewhere within the county had, namely in Birkenfeld and in Kastellaun . At the same time, however, Trarbach was also the main town of the Oberamt of the same name. In 1815 the area around Trarbach was incorporated into Prussia and Trarbach became the seat of a mayor's office . Contrary to expectations, however, Zell and not Trarbach became the district town, although Trarbach was the largest town in the new Zell district . The mayor's office in Trarbach was dissolved in 1884. Trarbach no longer belonged to any mayor's office and from then on was administered in personal union with the new mayor's office in Traben.

The Trarbach Synod was established in 1818, the main town of which was Trarbach until 1972. Because of its size - the synod includes the districts of Bernkastel , Zell and Trier  - it was divided in 1825. Curiously, the district of Wolf belonged to the Trier Synod until 1892, which until 1843 was called "Synod Wolf" after the superintendent's place of residence.

At the end of the 19th century, Traben and Trarbach were, besides Bad Reichenhall, the first places in Germany to have electric street lighting built by the Edison company, today's AEG , instead of gas lamps , after individual streets in Berlin had previously been equipped with them.

In 1898 the first bridge between the two locations was built based on a design by the architect Bruno Möhring . This bridge, which was blown up in the last days of the war in 1945, was also the first road bridge between Bernkastel and Koblenz . The next bridges were not built until 1924 in Cochem and 1951–1953 in Zell.

The Bundeswehr had two properties in Traben-Trarbach, the Mont Royal barracks and the Wildstein barracks . There were the geoinformation department of the Bundeswehr , the Military Geophysical Office and Telecommunications General Headquarters (German Nalla) stationed.

The city ​​council in Traben-Trarbach consists of 22 council members, who were elected in a personalized proportional representation in the local elections on May 26, 2019 , and the honorary city ​​mayor as chairman.

For city mayor on May 25, 2014 Patrice Langer (SPD) was elected directly with 57.09 percent of votes cast. He replaced Heide Pönnighaus (CDU) in this office. In the 2019 local elections, he was re-elected with 72.07 percent of the votes cast.

The tourism is an important economic factor in the region. In addition to the wine and active tourism in particular is here health tourism to name. Despite structural changes in the traditional spa and bathing system in the 1990s, combined with less approved spa therapy measures, the health tourism offer is becoming increasingly important again due to demographic change . The Moselsteig leads through the city.

The Moselle Valley Railway, called "Saufbähnchen" , ran through Traben-Trarbach until December 31, 1962 . The station building on the Trarbach side was demolished when the B 53 was expanded.

The terminus of the Moselwein-Bahn (Bullay - Reil - Kövenig - Traben-Trarbach) is located in the Traben district (left bank of the river ). Here, the trains on the RB85 line run every hour according to the Rhineland-Palatinate cycle. Due to the location of Traben-Trarbach in the district of Bernkastel-Wittlich, the tariff of the Verkehrsverbund Region Trier applies to bus and train journeys ; for journeys with a start / destination station in the Verkehrsverbund Rhein-Mosel , its tariff is also valid as a transitional tariff. The old station building, built in 1904 based on the model of old Traben half-timbered houses, is still preserved today and now serves as the seat of the mayor and as an event center. The new stop was relocated 150 m down the Moselle to the area of ​​the former freight station. Furthermore, the construction of a further train stop Traben-Trarbach Schule is planned.

In 1956 a sports airfield was built on the Trabener Berg Mont Royal ( ICAO code: EDRM).