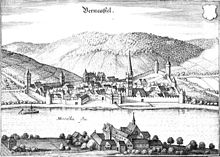 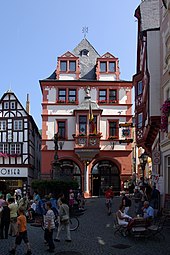 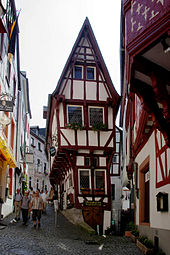 Bernkastel-Kues [ ˌbɛɐnkastl̩ˈkuːs ] ( Dehnungs -e ), official spelling until July 16, 1936: Bernkastel-Cues, even older spelling Berncastel-Cues, is a town on the Middle Moselle in the district of Bernkastel-Wittlich , Rhineland-Palatinate . It is a state-recognized spa , the seat of the community of Bernkastel-Kues and the Service Center for Rural Areas Mosel (DLR Mosel) and the birthplace of the medieval churchman and philosopher Nikolaus von Kues (Cusanus).

Bernkastel-Kues is located in the Moselle valley , about 50 kilometers from Trier . The highest point is Mount Olympus ( 415  m above sea  level ), the lowest point ( 107  m above sea level ) is on the banks of the Moselle. The urban area extends over a total area of ​​23,657,101 m², of which 7,815,899 m² are used for agriculture. This makes Bernkastel-Kues one of the largest cities in the Middle Moselle in terms of area . Immediately neighboring municipalities are (clockwise, starting from the north) Graach , Longkamp , Monzelfeld , Veldenz , Mülheim , Lieser , Maring-Noviand , Platten and Zeltingen-Rachtig .

The city is in the transition zone from the temperate maritime climate to the continental climate . Due to the Eifel Barrier , Bernkastel-Kues is protected and protected from rain by westerly winds, which can cause a blow-dry effect. The annual precipitation is 706 mm. The precipitation is in the middle third of the values ​​recorded in Germany. Lower values ​​are registered at 41% of the measuring stations of the German Weather Service . The driest month is February, with the highest rainfall in August. In August there is 1.6 times more rainfall than in February. The amount of precipitation hardly varies and is evenly distributed over the year. Lower seasonal fluctuations are recorded at only 22% of the measuring stations .

The first evidence of human settlement (3000 BC) was discovered by archaeologists in Kues. Around 370 Decimus Magnus Ausonius , Roman poet and teacher at the imperial court, wrote his poem Mosella . Adalbero von Luxemburg , provost of the Trier monastery St. Paulin, became lord of Bernkastel. The first documented mention of Bernkastel comes from the first half of the 11th century. At the turn of the 7th to the 8th century, a geographer designated a place Princastellum . This is evidence of a Roman fort in the 4th century near what is now the Landshut castle ruins; This is indicated, among other things, by fittings, ceramics and iron finds below the castle. The name form in the 12th century Beronis castellum was a scholarly relatinization that referred to the Trier provost Adalbero of Luxembourg (11th century). Construction of the third castle began in 1277 under the rule of Archbishop of Trier, Heinrich II von Finstingen . On May 29, 1291, King Rudolf I of Habsburg granted Berrincastel town rights. Landshut Castle, which was built at that time, only received this name in the 16th century. In 1332 the town charter was confirmed again by the collecting privilege of Emperor Ludwig of Bavaria . Archbishop Boemund II became elector through the Golden Bull . According to legend, he was cured of a serious illness with a glass of wine - the legend of the Berncastler Doctor began. In 1401 Nicolaus Cusanus was born in the house of the Moselle shipper Henne Cryfftz (Krebs), which can be visited. In 1451 the St. Nikolaus Hospital (Cusanus pin) was built, a hospital for the poor. In 1505, the name Landshut appeared for the first time for the archbishop's castle in a sovereign ordinance of Jacob II . Emperor Maximilian stayed in Bernkastel in 1512 on the way to the Reichstag in Trier. The plague raged in Bernkastel in 1627 and in Kues in 1641. Landshut Castle fell victim to a fire in 1692 and has been in ruins ever since. 1787 had Kurtrierische Office Berncastel 4,743 inhabitants. From 1794 to 1814 Bernkastel was a canton town under French rule, at the Congress of Vienna (1815) Bernkastel and Kues were added to the Kingdom of Prussia. Bernkastel became the seat of the mayor's office in Bernkastel and, in 1821, the seat of the Bernkastel district . In 1848 the revolution also came to Bernkastel: the black, red and gold flag was hoisted at the town hall and a vigilante group was formed. The first road bridge between Bernkastel and Kues was built in 1872/74, the first rail link in 1882/83.

The city in its current form was created on April 1, 1905 through the merger of the city of Bernkastel with the wine-growing village of Kues opposite. In 1926 there were major vintners unrest on the Moselle, the tax office in Bernkastel and the customs office in Kues were stormed. On November 9, 1938, during the Reichspogromnacht , there were serious riots against Jewish fellow citizens; the synagogue was destroyed. Towards the end of the Second World War , the city was bombed several times. On February 19, 1945, numerous houses around the market square in Bernkastel were destroyed and 41 people were killed. In an attack on March 2, large parts of the old town hall and other buildings were destroyed and 29 people were killed. On March 11th, the Moselle Bridge was blown up and American artillery started bombarding it the following day. The Americans entered Kues on March 15th and Bernkastel on March 16th.

The city ​​council in Bernkastel-Kues consists of 22 council members, who were elected in a personalized proportional representation in the local elections on May 26, 2019 , and the honorary city ​​mayor as chairman. Template: future / in 3 years

Port's predecessor, Helmut Gestrich , had been mayor of the city since 1994 and was re-elected in 1999, but resigned from office on November 22, 2000 due to involvement in the Doerfert affair .

The coat of arms shows a quartered shield, in fields 1 and 4 in black an upright silver key with a beard turned to the left, in 2 a black bear facing and in 3 in gold a red, upright cancer.

The description of the city coat of arms, which was valid until 1951, was: Quartered with a silver heart shield, inside a red cross, 1 and 4 in red an upright silver key with a beard turned to the left, 2 and 3 in silver a black bear each facing.

The two keys symbolize the heavenly keys of Peter , to whom the Trier diocese is consecrated. The bear symbolizes the heraldic animal of the city of Bernkastel and the cancer stands for Cardinal Nikolaus von Kues, real name Cryfftz (= cancer). In Germany there are only five other municipalities with a cancer coat of arms : Bad Wurzach , Hohenfelde , Kreßberg , Vörstetten and Cottbus . 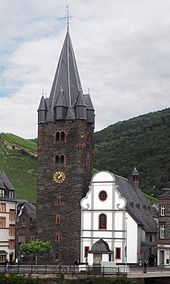 The Cusanus pen in Bernkastel-Kues 1831, colored aquatint by F. Hegi based on a template by Karl Bodmer

Evangelical church in the Kues district

The medieval market square in Bernkastel is worth seeing with its gabled half-timbered houses from the 17th century, among which the narrow pointed house from 1416 stands out. A number of well-preserved buildings and the Renaissance town hall from 1608 are grouped around the St. Michaelsbrunnen from 1606. The Catholic parish church of St. Michael and St. Sebastian , whose imposing bell tower originally served as a defensive tower, is located on the Moselle . Above the Bernkastel district lies the Landshut castle ruins , a former summer residence of the Archbishops of Trier , which was destroyed by fire in 1692. Today it serves as a popular vantage point over the Moselle valley . The only remaining city gate, Graacher Tor, is also worth seeing .

The city also has several squares, such as the medieval market square, the square at the Bärenbrunnen, and Karlsbader Platz, which opened in July 2005 (named after the twin town). The St. Nikolaus-Hospital (Cusanusstift), the late Gothic monastery of Nikolaus von Kues, is another well-known sight. The institution's library has an outstanding academic rank . The Evangelical Church , built in 1881 in the style of historicism , is also located in Kues .

The former Machern monastery is located near the district of Wehlen , and today it houses a winery, a brewery and a restaurant. In the Andel district is the Andel Evangelical Church with its bells from the 15th century.

Historically the most important branch of the economy is viticulture . Within the Bernkastel area, vines on 5,844 hectares are mainly cultivated on steep slopes . Numerous goods still exist in Bernkastel-Kues today . Riesling is the common grape variety; In addition, Burgundy, Rivaner , Kerner and Dornfelder , among others, are produced in small quantities . In the urban area, the major locations Münzlay (district Wehlen), Badstube (district Bernkastel) and Kurfürstlay (districts Bernkastel, Kues and Andel) meet with the following individual locations:

Also the tourism is an important economic factor in the region. In addition to the wine and active tourism in particular is here health tourism to name. Since 2005, Bernkastel-Kues has been known as a “ climatic health resort ”. Despite structural changes in the traditional spa and bathing system in the 1990s, combined with less approved spa therapy measures, the health tourism offer is becoming increasingly important again due to demographic change . The Moselsteig has been running through the town since 2014 .

Bernkastel-Kues is on the B 53 . With the 555-meter-long Burgberg Tunnel , which opened on June 27, 1997 and is dedicated to District Road 101, a local connection to the Hunsrück was created and the Bernkastel district was traffic-calmed. The B 50 also ran through the center of the city until November 21, 2019 . With the opening of the Hochmosel crossing , on which the B 50 now runs, this road was downgraded to the L 47 state road.

There are two Moselle bridges in the city , including the only suspension bridge over the Moselle. Both were renovated in the 1990s.

The city is part of the Trier Region Transport Association (VRT). In addition to the national bus routes, MB Moselbahn GmbH , which is part of the Rhenus Veniro Group , also operates a city bus route every two hours.

The Moselle Railway , known as the "Saufbähnchen" , ran through Bernkastel-Kues until December 31, 1962 . The station building is on the shore in the Bernkastel district (right bank of the river). There was also a terminus station in the Kues district (left bank of the river) , from where another railway line (the Maare-Mosel Railway ) had connected the city with Wittlich and the former cannon railway. Both lines are closed and removed from the track bed. The station building made of slate stone (Moselle construction) in the Kues district, which was built in the early 20th century under Reichsbahnbaudirektor Franz Schenk, has also been preserved to this day. An adjacent goods building has been restored and is used multifunctionally (goods hall). After the rail traffic was shut down, there was initially a large, unpaved parking lot in the former track area. Today the "Forum Alter Bahnhof" is located here, an urban service center with an underground car park. The railway line was from Bernkastel-Kues initially up to Lieser to Moselradweg , later Wittlich up to down in the Eifel for Maare-Moselle bicycle route rebuilt.

Bernkastel-Kues has a pier for Rhine-Moselle river cruises. There are also numerous other jetties along the Moselgestades. Round trips start there several times a day.