The community is divided into the two eponymous districts of Zeltingen and Rachtig. Associated living spaces are the forester's house Sabel and the Ürzigermühle.

Zeltingen-Rachtig is surrounded by vineyards in the large Moselle loop between Bernkastel-Kues and Traben-Trarbach, not far from the university town of Trier . Both districts are on the right bank of the river, at the transition from the Prallhang (steep) to the Gleithang (flat).

The most important infrastructure structure is the Hochmoselbrücke , which was completed and opened in November 2019 , which serves supraregional traffic and crosses the Moselle valley at a height of up to 158 meters.

Zeltingen-Rachtig lies in the transition zone from the temperate maritime climate to the continental climate ; The climate is very warm and sunny compared to other regions in Germany - in Brauneberg , not far away , the record temperature of 41.2 ° C in the shade, the highest air temperature ever recorded in Germany, was recorded on August 11, 1998 .

Due to the Eifel Barrier , the community is protected and protected by rain from westerly winds, which can also have a blow-dryer effect. At the same time, air warming is favored by low air exchange with the surrounding area. Associated with this, due to the constant evaporation of the Moselle water, is a regularly high level of humidity , which, especially in summer, causes sometimes stressful, humid weather and numerous thunderstorms.

Remains of human settlements near Bernkastel-Kues date from the time of the band ceramics around 3000 BC. The banks of the Moselle and the heights above Zeltingen and Rachtig are verifiable as early as the Neolithic (approx. 3500 BC) and, because of the favorable climate, were also inhabited. Already around 500 BC The Treveri , a Celtic-Germanic mixed people, from which the Latin name of the city of Trier Augusta Treverorum is derived, settled in the region around Zeltingen-Rachtig. Celtanc and Raptacum are the oldest known names of today's Zeltingen-Rachtig; they document the Celtic origin. The first documentary mention of Rachtig comes from the year 1067, Zeltingen is documented for the first time in 1116. Until the end of the 18th century, the two localities were an enclave of the Electorate of Cologne . Archbishop Kunibert of Cologne (623–663) is likely to have been the founder of Cologne's rule. The history of the two villages is mainly determined in the 14th, 15th and 16th centuries by the constant pledging of property in the Electorate of Cologne. In the 13th century, large estates and the patronage of the parish fell through donations to the Teutonic Order. The Teutonic Order property was administered from Rachtig.

After 1792 French revolutionary troops occupied the entire area on the left bank of the Rhine . From 1798 to 1814 Zeltingen and Rachtig belonged to the canton of Bernkastel in the French department of the Saar . The secularization brought the end of the Church's estates in 1802, it was drafted as a national and publicly and to the highest bidder at auction. This brought about an economic and social restructuring, which in the 19th century led to the formation of a large winemaking class and a local wine trade.

After Napoleon's defeat and the agreements reached at the Congress of Vienna in 1815 , the region was assigned to the Kingdom of Prussia . Under the Prussian administration, Zeltingen and Rachtig came to the newly created district of Bernkastel in the Trier administrative district , which belonged to the Rhine province from 1822 until the end of the Second World War . The founding period of the German Empire at the end of the 19th century brought the places an enormous economic boom due to the wine industry. Zeltingen-Rachtig has been part of the then newly formed state of Rhineland-Palatinate since 1946 .

Until 1939 there was a Jewish community in Zeltingen-Rachtig. In 1895 there were 78 Jewish residents in Zeltingen and Rachtig; in 1933, when the National Socialists took power, the Jewish community comprised 48 people. Due to the anti-Jewish policy of the Nazi state, the Zeltinger and Rachtiger Jews were forced to move or emigrate; In 1938 only 18 Jewish residents were counted, in 1939 the last Jew left his hometown.

From December 1944 to January 1945, a satellite camp of the SS Hinzert special camp was located in Zeltingen . About 90 prisoners were mainly used to build tunnels.

The development of the population of Zeltingen-Rachtig, the values ​​from 1871 to 1987 are based on censuses:

The local council in Zeltingen-Rachtig consists of 16 council members, who were elected in a personalized proportional representation in the local elections on May 26, 2019 , and the honorary local mayor as chairwoman.

There is evidence that the lay judges of Zeltingen-Rachtig kept their own seal from the beginning of the 15th to the end of the 18th century, which has two crossed keys in the front of the split shield and a continuous black cross in the background.

The black cross on a silver / white background is the coat of arms of the Archbishopric of Cologne , to which Zeltingen belonged until the end of the 18th century. The crossed yellow / gold keys on a red background are the symbol of St. Peter .

A partnership with Saint-Florentin (Yonne) in France has been maintained since 1966 . There are still “friendly contacts” with the Berlin district of Reinickendorf . 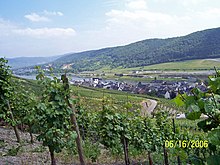 Community life has always been shaped by viticulture , and with 133  hectares of cultivation area, the community is one of the larger wine towns on the Middle Moselle . A well-known local wine location is the single location " Zeltinger Sonnenuhr "; at the wine auction of the winemakers association Bernkasteler ring in September 2013 achieved a 2010er- Trockenbeerenauslese this situation a bottle price of 3,875 euros. Other vineyards are u. a. " Zeltinger Himmelreich ", " Zeltinger Schloßberg " and " Zeltinger Deutschherrenberg ". All the individual layers on the municipal area are - with the exception of the single vineyard "Rotlay" that the major site " Schwarzlay heard" - the major site " Münzlay " within the wine-growing region Bernkastel ( Mosel wine region ).

To this day there are still wineries in the local community . These mainly grow Riesling .

Two parishes , the volunteer fire brigade and various musical, sports and other clubs shape the cultural village life in Zeltingen-Rachtig. Among other things, there is the Rudergesellschaft Zeltingen , the two L4 - world champion and Olympic one participant among its members, a successful rowing club.

The seven kilometer long culture route "From Kurköln to the German rulers" provides information on many information boards about life in the Moselle community in earlier times. It leads through both districts as well as several vineyards in the local community . Other hiking trails are the Deutschherrenweg, the Weinlageweg and the Moselsteig, which crosses the Moselle from Bernkastel.

Local festivals and wine festivals take place regularly. The highlights are the Zeltingen wine fair with the large public Middle Mosel Riesling wine tasting and the Rachtiger wine fair with the Monday market. In addition, the wine farm festival and the days of the open wine cellars, as well as the wine and street festivals take place in both districts. Numerous concerts, dance evenings and other events offer residents and their guests a wide range of entertainment. The operetta " Zeltinger Himmelreich " is performed every two years (most recently in 2017) by over 100 amateur actors on the historic market square of Zeltingen; Most of the people from Zeltingen-Rachtig are active.

The wine-growing and tourism play an important economic role. A local supply is guaranteed: bakery, grocery, doctor's offices, hotels, several restaurants as well as a post office and a bank branch are located in town. The community also has a kindergarten, secondary school, mobile home parking space, mini golf course, boccia and boules, water treading pools, Moselle parks and a sports field. There are several hotels, restaurants and numerous commercial and private renters with 906 guest beds in the village (as of July 2015). In addition, the headquarters of the international music company Prophecy Productions has been located in Zeltingen-Rachtig since 1998 .