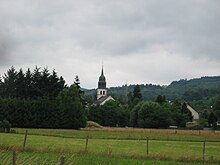 Kinderbeuern (also known as Kinderbeuern-Hetzhof ) is a municipality in the district of Bernkastel-Wittlich in Rhineland-Palatinate . It belongs to the Traben-Trarbach community .

Originally, Kinderbeuern (1296: Kynheymerbüren ) was the outlying settlement of the Moselle town of Kinheim im Alftal and until around 1740 Kinheim was incorporated. Kinderbeuern was first mentioned in a document in 1296. From 1794 Kinderbeuern was under French rule, in 1815 the place was assigned to the Kingdom of Prussia at the Congress of Vienna . Since 1946 it has been part of the state of Rhineland-Palatinate .

The development of the population of Kinderbeuern, the values ​​from 1871 to 1987 are based on censuses:

The municipal council in Kinderbeuern consists of 16 council members, who were elected in a personalized proportional representation in the local elections on May 26, 2019 , and the honorary local mayor as chairman.