This article describes the Bergweiler community in Rhineland-Palatinate. For the district of the municipality of Tholey in Saarland, see Bergweiler (Saarland) 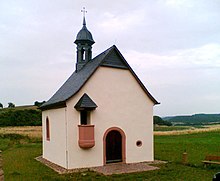 Bergweiler is a municipality in the district of Bernkastel-Wittlich in Rhineland-Palatinate . It belongs to the Verbandsgemeinde Wittlich-Land .

The place is about five kilometers west of the district town of Wittlich in the southern Eifel at about 300  m above sea level. NN and provides a better view of the Wittlich valley .

In the past the place was also called "Bergweiler über Wittlich" for more precise localization , which explains both the proximity to the district town and the geographical location.

In the vicinity of Bergweiler, traces of Stone Age settlement - stone tools - were found that date back to around 3000 BC. To be dated. There are also references to Roman settlements near the place.

In this protocol, a small church is mentioned for the first time, which is known under the current name of the Fintenkapelle . Bergweiler was referred to as a parish as early as the 13th century . In 1669 and 1833 the church was rebuilt at the same location in what was then the center of Bergweiler ( Unterdorf ). In 1957, the Catholic Church of St. John (Evangelist) was renovated and partially rebuilt, largely through the residents' own contributions. A cemetery is attached to the church with a church forecourt. The Eifel Heimat Museum is located in the attached parish hall .

The feint chapel outside the village, which dates back to the 17th century and was visited as a local pilgrimage church , was also renovated in 1959. The small field chapel is known as a pilgrimage chapel for sick children. In the past, the weight of the sick child was measured in grain in a crib to be used as a donation for the chapel. Numerous votive tablets inside the feint chapel still bear witness to the function of the chapel as a place of worship. The small pulpit facing the front is architecturally interesting. In the past, since the chapel was too small, it was necessary for the clergyman to preach from this outer pulpit to the faithful gathered in the open field in front of the chapel. The Fintenkapelle was first mentioned in 1656, a new building took place in 1717. In 2004 the chapel was again extensively renovated by local volunteers and has since shone in new splendor. The Fintenkapelle is the landmark of the place.

Before the French Revolution , the Lords of Warsberg were the owners of the manor in the imperial knighthood of Bergweiler. A long-term process of imperial immediacy before the imperial chamber court became obsolete in 1794 when the French occupied the area. In 1815 Bergweiler became part of the Kingdom of Prussia . Since 1946 it has been part of the then newly formed state of Rhineland-Palatinate .

The place is still divided into two districts by the locals as well as on maps. The old center with the church is called Bergweiler or Unterdorf, the newer part, which is a few meters higher than the old part, is called Oberbergweiler or Oberdorf. Corresponding development due to the population growth mean that the place is growing closer and closer together.

The municipal council in Bergweiler consists of twelve council members, who were elected by a majority vote in the local elections on May 26, 2019 , and the honorary local mayor as chairman.