The carnival clubs are the organizers of carnival sessions . They also organize the carnival parades , the local street carnival, the old woman's carnival and group visits to other carnival events . The session starts on November 11th, 11:11 am. Then the clubs celebrate the beginning with a wet cheer and with lots of music in public places, in restaurants or halls. 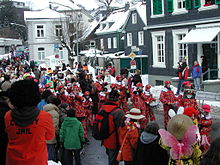 Parade of the Lennep Carnival Society with street carnival

The association's goal, the maintenance of traditional carnival customs, is recognized in Germany as non-profit in accordance with Section 52 (2 ) AO .

In 1381 Count Adolf founded the Geselschap van den Gecken together with 35 knights and noble lords . which can be considered the first carnival society. They elected a king and six councilors from among their number , who took over the foolish regiment during the carnival season. Court was held for seven days until Shrove Monday and the service was attended together on Carnival Tuesday. The members had to wear a badge that showed a fool all year round - the first order of the carnival . Those who forgot to do so had to pay a fine, which was donated to those in need. The Carnival Society of Cologne Fools Guild still invokes Count Adolf in its tradition today.

Carnival clubs can be found primarily in the Rhineland and Westphalia, but also in other regions and even abroad. There are umbrella organizations of carnival clubs. a. in Saarland, Thuringia and Baden. The oldest among the Cologne corps societies are the Kölsche Funken rut-wieß vun 1823 e. V. - Rote Funken Cologne , which is said to have been founded in 1823 in the Im Häuschen wine business . The worst soldiers of all time dressed in red and white , the Cologne city soldiers , who served in the cathedral city between 1660 and 1794 and whose troops were disbanded by Napoleon , supposedly served as a model . Die Große von 1823 Karnevalsgesellschaft e. V. was founded in the same year.