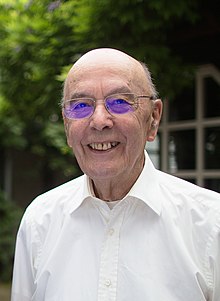 After high school in 1950 graduated Friderichs a study of the law in Marburg , Graz and Mainz . In Marburg he became a member of the Corps Teutonia . He finished his training in 1959 with the second state examination in law . In 1957 he received his doctorate as Dr. jur. He was then managing director of the Chamber of Commerce and Industry for Rheinhessen in Bingen until 1963 .

After the murder of the board spokesman of Dresdner Bank Jürgen Ponto by RAF terrorists, Friderichs joined the board of directors of Dresdner Bank in 1977 and served as board spokesman from 1978 to 1985. The direct switch from politics to business was criticized - the former Minister of Economics Friderichs suddenly had a salary around ten times higher than the German Chancellor.

In 1983, Friderichs fell into the twilight of the Flick donation affair . The magazine Der Spiegel had revealed that the Flick Group had paid money to parties and related non-profit organizations without the payments being properly accounted for by the tax office. In 1983 the public prosecutor brought charges against him for corruption. When she followed up on charges of tax evasion in 1985, Friderichs resigned as board spokesman. On February 16, 1987, the Bonn regional court acquitted him of the charge of bribery with a "third class acquittal", but sentenced him to a fine of 61,500 marks for tax evasion. The judges ruled that there was “considerable suspicion” that the Flick Group Friderichs “actually made the accused cash payments”.

Friderichs was a member of the Bingen district council from 1960 to 1964, where he was chairman of the FDP parliamentary group. From 1965 to 1969 he was a member of the German Bundestag . On December 13, 1972, he became a member of the Rhineland-Palatinate state parliament due to the rulings of the Federal Constitutional Court and the Rhineland-Palatinate electoral review court . The Federal Constitutional Court had declared the state election law to be partly unconstitutional. However, he resigned his state parliament mandate on January 9, 1973; for him moved Max Gunther Piedmont by the parliament. In the 1976 Bundestag election he was re-elected to the Bundestag , which he belonged to until his resignation on November 8, 1977. Helmut Schäfer took over the parliamentary mandate .

In 1969, Friderichs was appointed State Secretary in the Ministry of Agriculture , Viticulture and Forests of the State of Rhineland-Palatinate by the then Rhineland-Palatinate Prime Minister, Helmut Kohl, and, as a representative of the FDP, retained this office even after the FDP left the CDU / FDP coalition of the Rhineland-Palatinate state parliament after the CDU had won an absolute majority in the state elections in spring 1971 and provided the government alone.

After the federal election in 1972 , he was appointed Federal Minister of Economics on December 15, 1972 in the second cabinet of Federal Chancellor Willy Brandt . He also retained this office under Federal Chancellor Helmut Schmidt , who has been in office since 1974 . On October 7, 1977, Friderichs surprisingly gave up his office and switched to the board of directors of Dresdner Bank .

Minister of Economics of the Federal Republic of Germany

Federal Managing Director of the FDP