Hessisch Lichtenau is a small town in eastern northern Hesse in the Werra-Meißner district . In 2006 it was the venue for the 46th Hessentag .

Hessisch Lichtenau is located around 20 km (as the crow flies ) southeast of Kassel between the Hirschberg mountain up to 643.4  m above sea level. NHN high Kaufunger Wald in the north, the Hohe Meißner ( 753.6  m ) in the east, the Stölzinger Mountains with the iceberg ( 583  m ) in the southeast and the Günsteröder Höhe with the Himmelsberg ( 563.7  m ) in the southwest. The valley basin framed by these mountain ranges is called the Hessisch-Lichtenau Basin , which, like the core city of Hessisch Lichtenau, is traversed by the Losse and is part of the Frau-Holle-Land Geo-Nature Park. 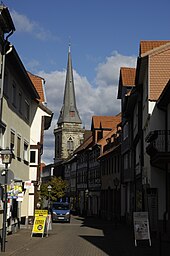 View of the city center with the church

Local districts with a local advisory council have been set up for all parts of the city, including the core city . The Hirschhagen industrial area with mixed development has its own local advisory board but is not a separate district, but belongs to the core city.

The six settlements of Vortriden (main town), Siegershausen, Kamphis, Herzelshagen, Hönrode and Boppenhagen were originally located within the current city limits of Lichtenau. Between 1283 and 1289, at the instigation of the first Hessian Landgrave Heinrich I, a fortified square was created at the intersection of the old trade routes "Leipziger Straße" (connecting Thuringia and Hesse) and "Sälzerstraße" (Salzweg from Sooden to the south) These streets should also secure access to the state capital Kassel and relieve the border fortress Reichenbach .

The planned settlement "Lichtenowe" was first mentioned on March 25, 1289 as a "new city". From the start it had city ​​rights and its own jurisdiction. After the city was founded, the six surrounding settlements were abandoned by their residents and deserted; only the field names were retained. Lichtenau was secured next to a curtain wall with a ditch and a wall. With the relocation of the official seat from Reichenbach Castle to the city, Lichtenau became the capital of the Hessian office, now known as " Amt Lichtenau ". During the Thirty Years War , Lichtenau was conquered by Croats in 1637 and set on fire. 84 residential buildings including the town hall and all public and church buildings were destroyed. During the French occupation, Lichtenau was the capital of the canton of Lichtenau in the Eschwege district of the Kingdom of Westphalia between 1807 and 1813 .

1821 City and official Lichtenau were during the Hessian administrative reform the county Witzenhausen assigned. Since 1866 Hessen-Kassel, and with it Lichtenau, belonged to Prussia and from 1868 to the Prussian province of Hessen-Nassau . On August 3, 1889, the city of Lichtenau was given the name "Hessisch Lichtenau" by decree of the Royal Government of Cassel. The renaming from Lichtenau to Hessisch Lichtenau, in order to avoid confusion with the mail delivery, goes back to the initiative of the post office clerk Gustav Siegel .

Between 1936 and 1938 the Rothwesten air base was laid out and the " Hessisch Lichtenau explosives factory " was built in the Hirschhagen forest area . The armaments factory received a siding on the Walburg – Großalmerode railway line. The following large barracks were built for this purpose:

Fixed accommodations were created in

After the Second World War , the Allies arranged for the Hirschhagen plant to be dismantled. Most of the factories were blown up. Since 1946, Hessisch Lichtenau has belonged to the newly founded state of Hesse. In the war and post-war years, 340 evacuees and 1,450 displaced persons found a new home in the city. As part of the regional reform in Hesse , the city of Hessisch Lichtenau came to form the Werra-Meißner district on January 1, 1974 through the merger of the districts of Eschwege and Witzenhausen.

As part of the regional reform in Hesse, the previously independent communities of Retterode and Wickersrode were incorporated on December 31, 1971 . Reichenbach was added on April 1, 1972. Friedrichsbrück, Fürstenhagen, Hausen, Hollstein, Hopfelde, Küchen, Quentel, Velmeden and Walburg as well as parts of the neighboring town of Großalmerode, which had around 100 inhabitants at that time, followed on January 1, 1974 by state law.

The spelling of the place name changed in the course of time from Lichtenowe (1289) or Lybenowe (1297) to Lichtenau (1575). In 1889 the city was named Hessisch Lichtenau by decree of the Royal Government of Cassel (August 3rd). This countered the constant confusion with places of the same name (see Lichtenau ). 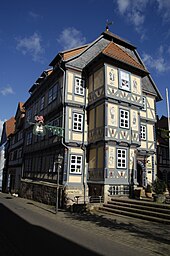 According to the Hessian municipal constitution, the mayor is chairman of the magistrate , which in the city of Hessisch Lichtenau includes seven honorary councilors in addition to the mayor . Michael Heussner (CDU) has been mayor since August 1, 2016. His predecessors were elected by the city parliament and from 1994 directly

On March 6, 2016, at the same time as the local elections , a mayoral election took place because the incumbent Jürgen Herwig wanted to end his third term early. His successor Michael Heussner prevailed in a runoff election on March 20, 2016 with 55.8% of the vote.

Stone with coat of arms of Hessisch Lichtenau

Hessisch Lichtenau has been twinned with the Flemish city ​​of Dessel in Belgium since 1971 .

Relatively little of the old townscape of Lichtenau has been preserved due to several major fires. The following damage was recorded: 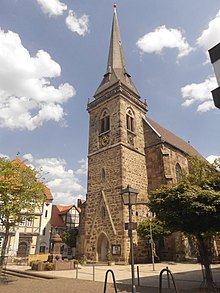 Hessisch Lichtenau is the gateway to the Frau-Holle-Land on the German Fairy Tale Route . So there is the Holleum here .

Since 1968 the community center has been the cultural and social center of Hessisch Lichtenau. The indoor swimming pool was built in 1975.

Despite the harsh climate, agriculture was the main source of income for the Lichtenau residents for centuries. Special privileges, such as markets and the monopoly for craft businesses in the courts of Lichtenau and Reichenbach, brought the city a certain level of prosperity. Linen weaving was of great economic importance and has been traceable since the 16th century and reached its peak in the 18th to the middle of the 19th century. At that time there were two trading houses that exported linen mainly to the West Indies. Due to the industrialization that started in the 19th century, this once so important branch of business came to a standstill. It was not until the lignite mining started in 1862 (ceased in 1967/68 civil engineering / open-cast mining) and the commissioning of a cigar factory (1868 to 1933) that the city experienced an upswing again. In the second half of the 19th century, construction began outside the old town center. The decisive economic upswing came in 1907 with the establishment of the heavy weaving mill Fröhlich & Wolff.

With the opening of the Kassel – Waldkappeler Railway (Lossetalbahn) in 1879, Lichtenau was connected to the railway. On June 1, 1985, local passenger transport was discontinued. Freight traffic to Walburg was maintained until December 31, 2002; then the section between Hessisch Lichtenau (kilometer 35.0) and Walburg was shut down, as was the previous section to Waldkappel. Since January 29, 2006, the Kassel tram has been running on the reactivated route to Hessisch Lichtenau. Until July 6, 2007, the RegioTram line 2 also ran on the route.

The tram line 4 in the direction of Druseltal has been running on the Lossetalbahn directly to Kassel City since January 29, 2006 and runs every 30 minutes on weekdays, every 15 minutes from Monday to Friday and every hour on the weekend. In some places, however, the tram route deviates from the original route. In Hessisch Lichtenau it leaves the railway line, crosses it by means of an underpass and ends in a turning loop on a meadow near the city center.

Wehretalbrücke (view from the southeast) of the A44 near Walburg

Hessisch Lichtenau is on the B 7 , in the east of the city between the junctions Hessisch Lichtenau-West and Hessisch Lichtenau-Ost (Walburg) there is a few kilometers long section of the BAB 44 with the Wehretal bridge ( 530 m long) and the Walberg tunnel (approx . 280 m long), the extension sections to Kassel and Wommen are in various construction and planning phases.

Since August 2015, Hessisch Lichtenau has been served daily on the L082 (Düsseldorf-Prague) line operated by the private long-distance bus operator Flixbus .

In the years 1936 to 1938 an airfield was laid out in an easterly direction as an external landing field for the Rothwesten air base . In 1962, the Blücher barracks was built on the disused airfield. The LAU radio beacon was located in the vicinity of the Fürstenhagen district until April 18, 2007 .

In 1895/96 a school was built on Landgrafenstrasse. In several construction phases between 1950 and 1964, a modern school complex with a gym was built between Heinrich- and Hopfelder Straße. In 1960 the Freiherr-vom-Stein-Schule (grammar school), founded in 1946 as a private secondary school, was able to move into the new building on Bergstrasse, followed by the games and sports hall in 1965 and further buildings for the comprehensive school in 1971 and 1978.

There are currently three primary schools in the municipality:

The only secondary school in the community is the Freiherr-vom-Stein-Schule in the city of Hessisch Lichtenau, a comprehensive school with upper secondary level. The FvSS has a distinctive all-day offer.

There is an orthopedic clinic in Hessisch Lichtenau. The clinic and rehabilitation center "Lichtenau" was built from 1949 on the grounds of the Teichhof camp. The clinic had its own stopping point until the suspension of passenger traffic on the Lossetalbahn in 1985.

From 1960 to 1962 a garrison for the German armed forces was built on the former airfield, which made Hessisch Lichtenau a garrison town in 1962. As part of the restructuring of the Bundeswehr ( transformation ), the Blücher barracks was closed in 2006. Before it was closed, the barracks was home to the Bundeswehr's youngest battalion, the 2nd Panzer Artillery Battalion .

Municipalities in the Werra-Meißner district