Sign for an omnidirectional radio beacon in aeronautical charts

An undirected radio beacon ( English Non-Directional Beacon - NDB ) or circular radio beacon is a transmitter on the ground which continuously emits radio waves in all directions (non-directional) . Non-directional radio beacons serve as route or approach beacons as well as for position determination in air and sea navigation. The transmission frequency - usually on long wave - is modulated for identification purposes with an identifier keyed in Morse code .

On the approach to Klagenfurt ( LOWK ) - non-directional radio beacon with the callsign KI on 313 kHz; Transmitter hut, antenna with roof capacity 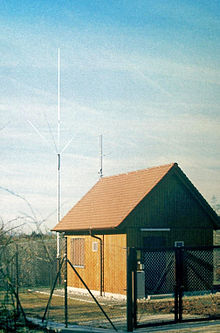 In contrast to radio transmitters , which also transmit in the long and medium wave range between 150 and 1,610 kHz, non-directional radio beacons often use only very inconspicuous transmitting antennas with heights of around 10 to 20 m or stretched T antennas . Occasionally one can also find guyed masts with a height of up to 50 m, which are provided with a roof capacity to adapt to the shaft length , which is much greater than the mast height .

The transmitter of an omnidirectional radio beacon is designed as a double system with a monitor to ensure reliability. The monitor gives a fault indication to the next control station if the transmission power drops by more than 50% or if the identifier fails. If a transmitter fails, the reserve transmitter is switched automatically.

The sides emitted by the non-directional beacon radio waves arrive at the aircraft or ship are here in the ADF device ( A utomated D irection F indian, Radiokompass) is received and identification (Morse letter), and by direction finding to the direction of entering (first relatively to the aircraft, then by comparison with a gyro or magnetic compass also the direction).

Approach NDBs
in the vicinity of airfields, NDBs only have a range of max. 25 NM ( nautical miles ) (around 46 km). To distinguish them, they often have an identifier made up of just two letters, for example HW . The approach NDBs ( outer marker and inner marker ) are on the approach baseline (imaginary extension) in front of the runway . If the aircraft is in front of one of the markers , the ADF pointer in the aircraft points forward; it turns when flying over and then points backwards. In this way, the pilot can check compliance with the glide angle during the descent , even if his view is obstructed , because the target altitude is specified above each marker .

Line NDBs
have ranges of up to 200 km. Their identification consists of three letters, for example HAB . They often mark the geographical positions of holding loops or reporting points when approaching airports.

The technical equipment for flight and ship navigation by means of a non-directional radio beacon consists of two devices, on the one hand the Automatic Direction Finder (ADF) in the aircraft or on board a ship and on the other hand the NDB transmitter on the ground.

Non-directional radio beacons work in Germany in the frequency range from 200 to 526.5 kHz, worldwide 190–1750 kHz. The radio waves give no indication of lawful or misleading north . The distance between the individual frequencies is 1 kHz (according to ICAO Annex 10). Non-directional radio beacons transmit in the modulation type A0 / A1 (an amplitude-modulated carrier wave that is interrupted for the identification in Morse code ) or A0 / A2 (an amplitude-modulated carrier wave with an auxiliary carrier, onto which the identification in Morse code is modulated from 2 or 3 letters ). The identifier is used for unique identification and is repeated approximately every 30 seconds.

Non-directional radio beacons have a range of 27 km to 370 km (15 to 200 nautical miles) and a fixed operating distance of 27 km to 185 km, depending on the intended use. Compared to the VOR , non-directional radio beacons offer the advantage of a much greater range at low altitudes. However, in addition to other disturbances such as thunderstorms, especially in the evening hours, reflections of the sky wave in the ionosphere can lead to overreaches and changes in the polarization of the signals. The antenna uses vertically and horizontally polarized signals. The signal is also polarized horizontally due to the reflection from the ionosphere. The horizontal component results in interference when evaluating the signal, since the horizontal antenna of an NDB receiver also receives these horizontally polarized interference signals. Any displays on an NDB navigation display device will be falsified. The further the distance to the NDB, the greater the error, since ground waves are weaker and sky waves, which are reflected by the ionosphere, flow relatively more into the evaluation of the signal on the display device.

The signals from the NDBs are primarily received more reliably by means of ground waves than by sky waves. The night sky wave propagation of long waves enables reception from a much greater distance than the nominal range, as the sky wave is reflected by the ionosphere. This enables the NDB-DX, which is popular with radio amateurs ( DXers ), and it has already been possible to receive NDBs from overseas.

Compared to more modern options ( VOR / DME , GPS ), NDBs offer an almost rudimentary form of navigation - they mark a destination. In crosswinds it is not easy to approach it in a straight line, because the lead angle has to be corrected continuously (see Homing ). Even after the introduction of the convenient but expensive VOR navigation in highly developed countries, the NDB navigation remains necessary. In narrow valleys, VORs are unsuitable because of the strong reflection of VHF waves on the mountains, where you have to rely on NDBs, such as at Innsbruck Airport . In all sparsely populated (developing) countries, NDBs are indispensable for flight navigation. In South Africa or Angola, for example, there are predominantly NDBs. 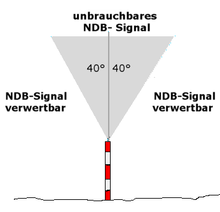 Confusion cone above a NDB

Silent cone (Engl. Cone of silence )
Reliable directional determination is not possible in a conical area above the transmitting station. The width of the cone of silence is 30–40 ° generatrix. The cause of this is not to be found in the lack of field strength just a few 100 m above the transmitting antenna, but rather in the interaction with electrical and magnetic antennas in the aircraft, which are designed to determine the direction in a horizontal plane ( see radio compass # functionality ).

electrical influence (Engl. electrical error )
Thunderstorms, and occasionally electromagnetic interference from sources outside and inside an aircraft, can irritate the ADF needle.

Disruption of the NDB due to multipath effect

Shoreline effect (Engl. Error shoreline )
If the signal and the coastline are almost parallel, there may be a false indication on coastlines.

Twilight effect (Engl. Error twilight )
Radio waves are reflected back by the ionosphere and cause fading , especially during sunrise and twilight .