Antenna DME transponder, in the middle of a VOR antenna system 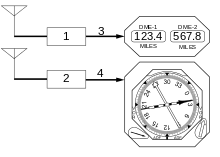 DME on-board receiver, together with the ADF unit

Flight over the DME with distance information

Distance Measuring Equipment ( DME , English for distance measuring equipment ) is a radio station of the navigation radio service whose transmissions are intended to enable an aircraft to determine its distance in relation to a fixed reference point. In this case, by time of flight measurement the slant range of the aircraft determined by a DME ground station. The DME is based on secondary radar technology .

A DME is used in conjunction with a rotary radio beacon (VOR) or as a marker replacement for an ILS approach. A combined ground station with VOR transmitter and DME transponder is called VOR / DME or ILS / DME.

The technical principle of the DME is also used in the distance measurement part of a TACAN .

A DME system consists of a UHF transmitter / receiver query device (interrogator) in the aircraft and the UHF receiver / transmitter ( transponder ) on the ground.

DME operate in the frequency range 962–1.213 MHz (divided into 126 X and 126 Y channels), which is assigned to the air navigation service for primary use.

This results in the following calculation to calculate the inclined distance to the DME station:

To calculate the distance above ground, one applies the Pythagorean theorem :

The measured distance is displayed in nautical miles on the aircraft instrument in the cockpit .

Important for the use of DME -Information is understanding that not the distance above the ground, but from the triangular relationship of altitude resulting and removal on the ground slope distance (Engl. Slant range ) is displayed. The altitude is displayed as a distance directly above the station (→ 1  NM  ≈ 6,076  ft ). The measurement error is approx. 45 to 100 m, with precision systems 50 m.

If the DME is used in conjunction with a VOR or NDB for an instrument approach, the weather conditions must be better than the minimum conditions of a Category I instrument landing system .