During the colonial period, Canadians served in the British armed forces or in local militias . Despite the establishment of the Canadian Dominion in 1867, Canadian forces were under the British Crown until the turn of the 20th century . Canadian militias defended their homeland during the American Revolutionary War , British-American War and the Fenian Raids . A Canadian expeditionary force supported the British crown in the Boer War .

The founding of the Canadian armed forces itself dates back to 1812 when such an organization was needed to help repel American invaders . The Royal Canadian Navy was founded in 1910, the Royal Canadian Air Force in 1924.

Canadian soldiers, sailors and pilots derive their identity from their not insignificant contributions to the two world wars and the Korean War . 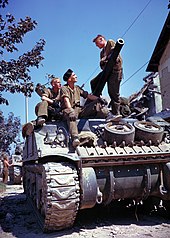 Commemoration of the fallen Canadian soldiers in the Battle of Ortona

Graves of the fallen at the Gustav Line , the largest battle with Canadian participation in World War II with 1,400 dead

Canadian units have British-American War , the Boer War , the First and the Second World War, the Korean War and the Gulf War (1990/1991) served, and contributions to peace missions, smoldering conflicts and undeclared wars such as the Suez crisis , the Cyprus conflict , the Yugoslav wars or in the " fight against international terrorism " ( Afghanistan war ). Canada is a member of NATO and a contractor to NORAD , the North American airspace defense alliance.

There were also many other battles during the advance in 1944 and 1945. Due to the high casualties (injured, fallen, missing, prisoners of war), Canada reintroduced conscription at the end of 1944. This led to the conscription crisis of 1944 ; in the end only a few hundred conscript soldiers made it to the front. Canadians were also involved u. a. at the Battle of Kapelsche Veer , Operation Blackcock and the Battle of the Reichswald near Kleve.

By the German surrender on May 8, 1945, Canadian troops had liberated all of Norway and the entire Dutch territory north of the Rhine and the Lek River . They left these areas within a few months after public order was restored .

Since 1947, the Canadian Armed Forces have participated in 73 operations around the world. In 2002 a total of 3,000 Canadian soldiers were posted to eleven missions abroad, such as SFOR in Bosnia and Herzegovina. The Canadian involvement in the war in Afghanistan from 2001 until today has been one of the most expensive and loss-making operations.

Canadian regular and reserve units are also active at home: in 2001 alone, they followed up 8,000 search reports in which they saved more than 4,500 lives. The great popularity of the Canadian military is based on this type of mission. The Canadian Rangers regularly conduct so-called sovereignty patrols to support Canada's sovereignty claims over its Arctic territories.

Canada deployed the largest professional army in its history during World War II - conscription was only introduced shortly before the end of the war, so only 2,400 conscripts could still be deployed until the end of the war. Even after this period, defense spending and the size of Canada's armed forces remained at roughly the same level, but were scaled back from the early 1960s, when the threat to Canada from the Warsaw Pact nations steadily waned. During the 1990s, this trend continued due to the fall of the Berlin Wall and the associated disappearance of the Iron Curtain , which led to budget and personnel cuts, location closings, but also to a reduction in Canada's combat strength (unlike in the USA, for example similar redeployments did not automatically lead to a weakened combat strength).

Canada maintained a number of air and land forces in Germany from the end of World War II until the 1990s. These last two major bases were in Lahr / Black Forest in the Ortenau district ( CFB Lahr ; closed on August 31, 1994, today Black Forest Airport ) and in Rheinmünster-Söllingen in the Rastatt district ( CFB Baden-Soellingen ; closed on December 31, 1993, today Baden-Airpark ). Both locations were in Baden-Württemberg, near the French border. Various smaller units remained on German soil, which u. a. in the multinational NATO unit in Geilenkirchen -Teveren near Aachen , the NATO Airborne Early Warning & Control Force E-3A Component are in service, or provide support to this flying group.

Unlike the armed forces of our closest allies , such as B. Great Britain, the USA, Australia or New Zealand , the Canadian armed forces are an associated organization with a single command structure. The white paper on defense policy of March 1964 did not provide for a restructuring of the armed forces as still separate organizations and preferred them rather as a "union of operations, personnel, supply and logistics as well as administration" .

On February 1, 1968 Bill C-243, The Canadian Forces Reorganization Act, came into effect, and the Royal Canadian Navy and the Royal Canadian Air Force were initially united in the Canadian Forces . While it was pretended that the main aim was to save costs, Prime Minister Lester Pearson and his Defense Minister were accused of chasing after Canadian post-war postmodernism and trying to shake off monarchist traditions. But the reorganization was also criticized from a purely technical point of view , for example by JL Granatstein , a well-known Canadian military historian , in Who Killed The Canadian Military? (in German roughly: Who made the Canadian military incapable? ).

In this new structure, the three former armed forces were divided into six functional commands - Maritime Command, Mobile Command, Air Defense Command, Air Transport Command, Material Command and the training command. While the Canadian armed forces were one armed force, their members were assigned to the three “surroundings” of land, air or sea. This classification was determined by the career of the serving individuals - a pilot was assigned to the air force. Non-environment-specific soldiers such as military policemen or paramedics were randomly assigned. However, they remain in their “environment” until the end of their careers, regardless of their unit or rank .

For reasons of tradition, in 2011 the land command, sea command and air command were renamed into Army , Royal Canadian Navy and Royal Canadian Air Forces, and in 2013 the four land forces commandos were renamed Army divisions. In principle, however, the integrated structure of the Canadian armed forces was retained.

Flag of the Associated Canadian Forces

The primary mission of the Canadian Armed Forces is to protect the territorial integrity of Canada and its citizens. The armed forces also have a mandate to support and protect the country's political and military alliances.

Canada is working closely with the United States and its armed forces to protect the North American continent from all outside attacks, such as: B. as part of the joint North American airspace defense command.

Furthermore, by participating in multinational peace missions , the Canadian military is supposed to create and secure peace and security across the globe.

The Canadian armed forces in their current form came into being on February 1, 1968, when the Canadian government merged the Canadian Army , the Royal Canadian Navy and the Royal Canadian Air Force . Thus Canada was one of the few nations that had so closely united their armed forces. The original approach of even introducing a uniform uniform, however, did not prove successful and was revised a long time ago. The historical names were reintroduced in 2011.

Canada has been a member of NATO since it was founded in 1949. The Canadian armed forces are closely integrated into their structures and permanent participants in their exercises, and also present in joint formations. Canada also supports the UN in its humanitarian and peace missions .

The Commander-in-Chief of the Canadian Armed Forces is Queen Elizabeth II , Queen under the law of Canada, represented by the Governor General of Canada , currently Julie Payette . The military leader is the Chief of the Defense Staff General Jonathan Vance (Canadian Army). The respective defense minister is responsible for defense policy in the cabinet . Since November 4th, 2015 this is Harjit Sajjan . The headquarters of the Canadian armed forces are located in the capital of Canada, in Ottawa .

Since 2006, four command commands have been set up, one of which is Canada Command (CANCOM) , which is primarily responsible for the security of the country and is responsible for planning operations within the country. The Canadian Special Operations Forces Command (CANSOFCOM) coordinates the special forces of the armed forces on domestic and international missions. The Canadian Expeditionary Force Command (CEFCOM) coordinates the international operations of the armed forces. The Canadian Operational Support Command (CANOSCOM) has a supporting function and takes care of the logistics and infrastructure in the operational areas.

In 2012, the Canada Command , Canadian Expeditionary Force Command, and Canadian Operational Support Command were austerity measures in the new Canadian Joint Operations Forces Command . Canada Command was responsible for the defense of Canada, as well as for relief operations (civil protection, homeland security, etc.) within Canada. Canadian Expeditionary Force Command was responsible for missions abroad (in the context of NATO , peace operations and crisis response abroad). Canadian Operational Support Command provided support forces (engineers, resupply troops, medical troops, military police, etc.) to the two other commands, as well as the Canadian Special Operations Forces Command for operations inside and outside Canada. After the merger of the three conventional task forces, the Canadian armed forces are divided into three different command categories. Each command is in the National Defense Headquarters ( National Defense Headquarters ( NDHQ ) / quarter généraux de la Défense nationale ( QGDN )) in the capital of Ottawa in Ontario integrated. In the National Defense Headquarters is also the Strategic Joint Staff ( CF SJS ) / État-major interarmées stratégique ( EM IS FC ), which functions as the leadership and planning staff of the Canadian commander.

Leopard 2 (the Bundeswehr ) as well as in the Canadian army is used
→ Main article : Canadian Army

Parts of this paragraph seem since 2015 is out of date to be .
Please help to research and insert the missing information .

The Canadian Navy has repeatedly struggled with problems in its fleet. Technical problems prevented the Victoria-class submarines from reaching full operational readiness for years, while the Protecteur supply ships have actually reached the end of their service life. However, due to savings at the expense of the armed forces, a quick replacement with new buildings was not in sight in recent years. As the fleet neared its maximum lifespan, the Canadian government and the Department of National Defense (DND) announced the results of the $ 33 billion bid for the National Shipbuilding Procurement Strategy on October 19, 2011 . Two shipyards are to build a total of over 21 new ships for the Canadian Navy and the Canadian Coast Guard . The first ships should be delivered in 2015.

(excluding training aircraft) Information on the main page differs from the above in some cases.

1   does not officially maintain its own armed forces