from Wikipedia, the free encyclopedia
This is the spotted version , flagged on February 4, 2020 . There is 1 pending change that has yet to be viewed.

As humanitarian aid (from the Latin Humanitas. Humanity, charity) refers to measures for the protection and care of people in a humanitarian crisis that go beyond first aid. It takes place predominantly in the Third World and is carried out and financed by governmental and non-governmental organizations .

Emergencies can be due to various causes such as medical disasters ( e.g. a pandemic ), natural disasters (e.g. the tsunami of December 26, 2004 in Southeast Asia), armed conflicts ( e.g. Ogaden conflict between Somalia and Ethiopia), but also political Changes (for example boat people from South Vietnam ) arise. One of the basic rules of most humanitarian aid organizations is impartiality and neutrality. As a rule, the humanitarian actions focus on the short to medium-term elimination of the suffering of the affected population. B. through exploration, rescue measures, first aid , medical care, securing drinking water, distribution of food , tents, blankets, prisoner visits and control of the prison conditions, as well as general material and logistical provision and distribution of aids. As a rule, it does not include conflict resolution. The timeframe in particular distinguishes humanitarian aid from development aid or development cooperation.

The host state's consent is sufficient for humanitarian actions by civil aid organizations. The sending of troops to prevent and contain conflicts, to enforce peace, to protect humanitarian organizations or to post-conflict rehabilitation is only permitted under international law with a mandate from the UN Security Council. This separates humanitarian aid from humanitarian intervention .

Humanitarian aid for refugees in refugee camps is also of great importance . The large flows of refugees in the context of the refugee crisis in Europe from 2015 onwards . a. associated with insufficient international support from neighboring Syria. Due to the civil war in Syria , four million refugees were living in Syria's neighboring countries in July 2015 - mainly in Turkey, Lebanon and Jordan.

In civil war states, as an alternative to the escape corridor from disputed areas associated with homelessness or to the humanitarian deployment of the military, long-term aid deliveries have also gained importance as temporary aid corridors , sometimes also as a temporary opening of a transport route for humanitarian aid within a limited time window , around 6 hours a day without military use of weapons for a previously determined traffic connection. With humanitarian corridors , medical aid deliveries were also combined with the flight of injured people or families with small children threatened by war in host countries, in the age of modern aviation also as a humanitarian airlift . This was brought into play by the German Foreign Minister Frank-Walter Steinmeier for the former Syrian city of Aleppo in 2016 , where 300,000 people could not be adequately supplied with food overland due to the civil war, but also because of the daily air strikes even for medical purposes Relief goods a stable agreement at the UN level with a ceasefire seemed advisable for at least one air corridor .

The United Nations is trying to coordinate and partially finance the efforts of the aid organizations with certain sub-organizations such as UNHCR , UNICEF or UNCDF . The Office for the Coordination of Humanitarian Affairs (OCHA) has the central role in the coordination. The European Union makes significant contributions through its Humanitarian Aid Office (ECHO). The American agency USAID , which reports to the State Department , has been providing humanitarian aid abroad since 1961.

In January 2016, the United Nations reported that the international community was spending $ 25 billion annually on humanitarian aid, but that another $ 15 billion was missing. On this occasion, they proposed a solidarity surcharge on luxury goods and on services such as tickets for sporting events. 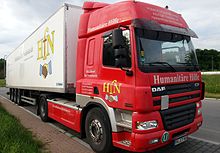 Truck with the inscription humanitarian aid

Some of the aid organizations are very specialized. In Germany there is, for example, Aktion Deutschland Hilft , as well as the Alliance for Disaster Aid , as an amalgamation of aid organizations, Doctors of the World and Doctors Without Borders as medical aid, Alliance Development Helps to bundle humanitarian aid in the broader sense, SEEBA and SEEWA units of the technical Aid organization for logistics, transport and infrastructure, Welthungerhilfe to promote help for self-help as well as World Vision Germany and Save the Children specifically for childcare.

Due to the crisis in many countries around the world with around 60 million refugees, the Office for the Coordination of Humanitarian Affairs (OCHA), together with aid organizations and the host country Turkey , organized a global summit for humanitarian aid ( World Humanitarian Summit ) on May 23 and 24 , 2016. in Istanbul (location of the congress also known as the UN Emergency Aid Summit: Istanbul Congress Center ). The humanitarian aid system, based on Resolution 46/182 of the UN General Assembly from 1991, should be adapted. In this context, Switzerland focuses on compliance with international humanitarian law and long-term aid. The German Chancellor Angela Merkel also traveled to Istanbul.

Another topic at the international meeting was a paradigm shift in the type of aid that was supported by the United Nations and Secretary General Ban Ki-moon : linked to cash programs (Humanitarian Cash Transfer Programs - CTP), either linked to vouchers, paid out directly to those affected The local markets can be strengthened in the form of labor or directly in cash to the hungry without conditions, while conventional (flown in or imported) benefits in kind weaken production and regional markets in the states concerned. The aim is a quota of around 50 percent because there are not always enough aid supplies available, for example in the event of natural disasters, but in 2016 only 6 percent of the aid is paid out directly and in cash. Similar to the successful Bolsa Família program in Brazil, an approach for an unconditional basic income , or the controversial concept of helicopter money in the EU , a cash payment stimulates the local economy, i.e. it does not weaken the local economy through the massive importation of free goods such as with conventional aid deliveries or food aid . Diakonie-Katastrophenhilfe already makes such cash payments in 14 percent of its programs, for example with money cards that are reliably topped up on a monthly basis. "It simply strengthens people's dignity, it does not turn them into incapacitated recipients of aid" ( Cornelia Füllkrug-Weitzel ). The Federal Ministry for Economic Cooperation also considers cash payments to be the method of choice in certain situations, for example to enable refugees in Jordan, Turkey or other host countries with credit cards from the World Food Program to buy food a somewhat more self-determined life near or in their home countries. However, there are concerns about many governments in Africa, which are more concerned with maintaining power than the well-being of the population, as well as with the development industry, where an apparatus that has been built up and inflated over many years is no longer needed in this form.

Likewise, keeping the aid pledges promised at international summits is very often more than a problem; some describe it as a crime "to know what is happening and not to help. To make donors accountable and to ensure that the money flows to the aid recipients It was agreed in Istanbul to use at least the International Aid Transparency Initiative (IATI) platform for publication in the open data standard; several states and aid organizations signed mandatory participation in the final document "The Grand Bargain" 480 international donors.