The following important information is missing from this article or section:
History and projects
Help Wikipedia by researching and pasting it .

The United Nations Children's Fund (originally: English United Nations International Children's Emergency Fund since 1953: United Nations Children's Fund , UNICEF ) is one of the development policy organs of the United Nations . It was founded on December 11, 1946, initially to help children in Europe after World War II . Today, the Children's Fund works primarily in developing countries and supports children and mothers in around 190 countries in the areas of health , family planning , hygiene , nutrition and education and provides humanitarian aid in emergency situations. In addition, it operates at the political level lobbying , such as against the use of child soldiers or for the protection of refugees . The organization advocates the implementation of the UN Convention on the Rights of the Child worldwide .

In 2016, it had revenues of $ 4.884 billion and expenses of $ 5.427 billion. The organization is financed by contributions from UN member states and donations from public and private donors. In 1965 the organization received the Nobel Peace Prize .

UNICEF was established by the General Assembly of the United Nations on December 11, 1946 to provide emergency food and health care for children in countries affected by the aftermath of World War II. Ludwik Rajchman (1881-1965), a Polish-French bacteriologist and founding member of UNRRA , is considered the founder of UNICEF and was its first director from 1946 to 1950, but resigned as director in protest against the Korean War. In 1953 UNICEF was assigned to the specialized agencies of the United Nations .

The international organization UNICEF and its parent organization UNO are based in New York . From 1989 UNICEF coordinated the humanitarian aid to supply the population during the civil war in South Sudan in Operation Lifeline Sudan . The organization carries out around 300 emergency aid missions a year in crisis countries - for example in the civil wars in Syria or Yemen, in the famine regions in Africa or after natural disasters.

So-called “national committees” function as independent non-governmental organizations in the industrialized countries. These are contractually bound to UNICEF and have been recognized by the respective governments. Its main task is to raise funds for the worldwide UNICEF projects, to inform about the situation of children around the world and to support the implementation of the convention on the rights of children. UNICEF is funded exclusively through voluntary contributions from governments and donations.

UNICEF currently has around 13,000 employees in around 190 countries and territories worldwide; most of them are national forces in the program countries.

German special postage stamp for the 20th anniversary of UNICEF

The German Committee for UNICEF eV represents the United Nations Children's Fund in Germany. It was founded on June 30, 1953. The office is in Cologne. The entrepreneur Jürgen Heraeus was the honorary CEO from 2008 to 2018 . He was replaced in 2018 by Georg Graf Waldersee ; Deputy CEOs have been Peter-Matthias Gaede and Claudia Graus since 2018 . Christian Schneider has been the managing director since 2010. The patron has been the wife of the incumbent Federal President Frank-Walter Steinmeier, Elke Büdenbender , since 2017 . The TV presenter Sabine Christiansen , the astronaut Alexander Gerst , the national soccer player Mats Hummels , the basketball player Dirk Nowitzki , the top model Eva Padberg and the TV presenter Nina Ruge are all volunteer UNICEF ambassadors in Germany . International UNICEF ambassadors from Germany are the Berliner Philharmoniker .

The German Committee for UNICEF collects donations and sells UNICEF greeting cards. The organization also provides information, lobbying and educational work for children's rights. In Germany, 8,000 volunteers work in around 200 groups for UNICEF. Young people and students are active in university groups and junior teams.

The following overview shows the donation income and income from the sale of greeting cards in Germany and their use. Around three quarters of the funds flow into worldwide and Germany-wide programs for children for health care, vaccination protection, education, child protection, the implementation of children's rights and emergency aid after natural disasters and in crisis regions, statistically summarized as program work .

1 : Income and expenditure according to the criteria of the German Central Institute for Social Issues DZI
2 : In autumn 2017, over 245,000 German citizens supported the work with a regular contribution.

The UNICEF Foundation has existed in Germany since 1996 , into which donors can contribute their assets. While donations flow into the UNICEF programs promptly, the foundation's assets are retained in the long term. The most important donation to date was made in September 2001 by Gustav Rau (1922–2002), to whom UNICEF bequeathed his valuable art collection.

The board and committee members of UNICEF Germany work on a voluntary basis. In 2016, an annual average of 110 employees were employed full-time. The German Committee for UNICEF bears the donation seal of the German Central Institute for Social Issues DZI. On December 2, 2010, UNICEF Germany received first prize from PricewaterhouseCoopers in the transparency competition of German donation organizations for its reporting on corporate governance. In 2012 UNICEF received second prize in the transparency competition from the same auditing and consulting company. In 2014, the German Committee was among the top five of 60 organizations in the transparency study by the analysis and consulting company Phineo on behalf of Spiegel Online . The awards recognized financial reporting, governance and transparency at UNICEF Germany. In 2007/2008 the organization had to cope with a public leadership crisis. Under a new board of directors, the statutes were modernized, transparency expanded and more control mechanisms introduced. In addition, a mission statement was drawn up for all full-time and voluntary employees and the annual and financial reports were designed in much more detail.

UNICEF Austria was founded in 1962 as a club Austrian Committee for UNICEF founded and has its headquarters in Vienna. Long-time president was the co-founder Martha Kyrle (1917–2017), the daughter of the former Federal President Adolf Schärf . Gudrun Berger has been managing director and chairwoman of the board since 2007. The donation volume was in the last few years

The Tax Reform Act 2009 made donations to UNICEF tax deductible in Austria . Since 2010, the organization has also been authorized to use the Austrian seal of approval for donations .

The supreme body of the national committee is the assembly of delegates. The delegates are elected by the members of UNICEF Switzerland and Liechtenstein for a four-year term. They work voluntarily and free of charge, among other things they appoint the board of directors and the commission members and are responsible for the strategic and normative leadership of UNICEF Switzerland and Liechtenstein. 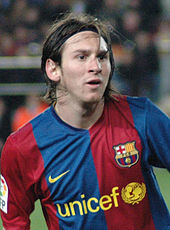 Lionel Messi with UNICEF logo on his shirt

Wikinews: UNICEF  - on the news