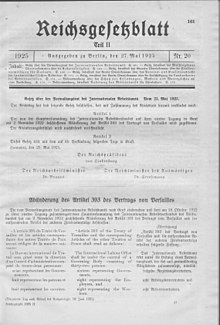 Law on the Administrative Council of the International Labor Office (German Reich, 1925) 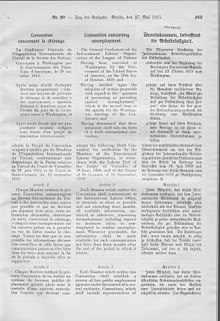 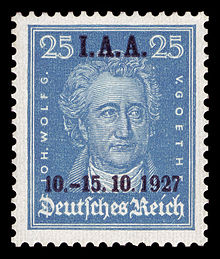 IAA conference in Berlin in 1927

The ILO began its work on April 11, 1919 at the Peace Conference in Versailles . It was originally a permanent institution of the League of Nations with the aim of securing world peace on the basis of social justice . It arose from a demand by the social democratic Amsterdam trade union international . The ILO constitution is annexed to the Versailles Treaty as Chapter 13. It begins with the words: "In the long term, world peace can only be built on social justice."

The ILO has been a UN specialized agency since December 14, 1946, when it took its seat in Geneva , making it the first of its kind. In 1969 the organization was awarded the Nobel Peace Prize and in 1994 the Hans Böckler Prize . The ILO has 187 member states.

Directors-General of the ILO since 1919 have been:

The ILO is tasked with further developing international labor standards . Governments, trade unions and employers work together in it (three-key principle). To this end, it draws up legally binding agreements (conventions) and recommendations to the member states. This affects various areas of labor law: standards for maternity protection, protection of temporary employees, age limits for certain jobs, etc. To date, there are a total of 188 conventions and 198 recommendations, which are also referred to as the “International Labor Code”.

After ratification by the competent authorities of a member state, conventions create legal obligations, whereas recommendations are only intended to provide guidance for politics. Members are required to report regularly to the ILO on the implementation of the Conventions they have ratified and on the status of their national legislation on labor law and health and safety.

The ILO and the international trade union movement

The International Trade Union Confederation (ITUC) describes the ILO in its program (2006) as a “global reference point”. The 2nd World Congress of the ITUC (2010) adopted a resolution “The International Labor Organization”, in which this importance is again underlined and further elaborated.