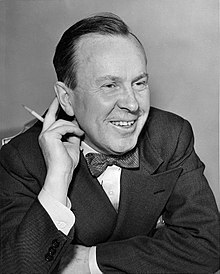 His minority government introduced universal public health insurance, the state pension fund system, the Order of Canada, and the new Canadian flag . As a representative of the United Nations , Pearson contributed significantly to ending the Suez crisis , for which he was awarded the Nobel Peace Prize in 1957 . He is also seen as the initiator of the United Nations peacekeeping forces and the founder of modern peacekeeping concepts .

Lester Bowles Pearson was the son of wealthy Methodist pastor Edwin Arthur Pearson (later pastor of the United Church of Canada ) and Anne Sarah Bowles. He studied history at Victoria College, University of Toronto , but was mostly an athlete during his student days. He played rugby union , ice hockey , baseball and lacrosse in the respective university teams .

A few months after the outbreak of the First World War , he volunteered for service as a medic in April 1915 . After completing his basic training, he was stationed in Thessaloniki in neutral Greece from 1915 . Pearson requested a transfer to the Western Front and arrived in Great Britain in March 1917 . Because he wanted to be a fighter pilot , he joined the Royal Flying Corps . However, there was never a combat mission: a training flight ended in a crash landing and later Pearson was hit by a bus in London while it was darkened and injured. In April 1918 he was finally discharged from service for health reasons and sent back to Canada.

Oxford University ice hockey game against Switzerland (1922); Lester Pearson can be seen in the front right

After the war, Pearson continued his studies in Toronto and graduated in 1919 as a Bachelor of Arts . In 1920 he worked in a meat processing plant in Chicago , but then went on a scholarship to St John's College at the University of Oxford and graduated in 1925 with a Master of Arts in modern history. He was also a lecturer at the University of Toronto and coached the university's ice hockey and Canadian football teams. In 1925 he married Maryon Moody, one of his students; the couple had a daughter (Patricia) and a son ( Geoffrey ).

Dissatisfied with what he saw as a modest income as a university lecturer, Pearson entered the diplomatic service in August 1928 and worked for the State Department, which at the time was still directly subordinate to the Prime Minister . As an advisor he took part in the London Naval Conference in 1930 , in international talks within the framework of the League of Nations and in 1932 in the Geneva Conference on Disarmament . Prime Minister Richard Bedford Bennett named Pearson First Secretary to the Canadian Ambassador to Great Britain in 1935 .

After the invasion of Ethiopia , Pearson advised his superiors to impose economic sanctions on fascist Italy , but Bennett's successor, William Lyon Mackenzie King , firmly rejected the proposal. He described the Munich Agreement of 1938 as "peace without honor" and warned of the imminent outbreak of war. Pearson had now earned an excellent reputation as a world politics analyst and began to increasingly influence Canada's foreign policy. After the outbreak of the Second World War he stayed in London and was involved in the development of British-Canadian relations.

In the spring of 1941, Pearson returned to Ottawa and became deputy undersecretary in the State Department. In June 1942, he moved to the Canadian Embassy in Washington, DC as Counselor of the Embassy . At that time, the leadership role among the Allies was finally passed to the Americans. Pearson realized that Britain and the Commonwealth of Nations would play a lesser role after the war, which in turn was of enormous importance to Canada's future foreign policy.

On January 1, 1945, he was appointed ambassador and in the same year took part in the founding assembly of the United Nations in San Francisco . He was proposed as the first Secretary General of the United Nations , but the Soviet Union vetoed this proposal . In September 1946 he was promoted to Vice Foreign Minister; In this function, Pearson was instrumental in shaping NATO .

Prime Minister King appointed Pearson Secretary of State on September 10, 1948. Since Pearson needed a mandate in the House of Commons as a minister , he successfully ran a by-election on October 25, 1948 in the constituency of Algoma East in northern Ontario , which included part of today's Algoma District and the island of Manitoulin . King's successor Louis Saint-Laurent , also from the Liberal Party of Canada , confirmed him in office on November 15, 1948. 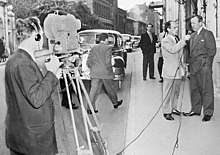 Interview with René Lévesque , who later became Prime Minister of Québec, in front of the embassy in Moscow (1955)

Pearson's duties were very much focused on international relations. He was mainly present at the United Nations and NATO as well as at the conferences of the Commonwealth of Nations. In 1951 and 1952 he was Chairman of the NATO Assembly, and in 1952 President of the UN General Assembly during its 7th session. This year he mainly focused on a solution to the Korean War .

In 1956 there was a military intervention by Great Britain, France and Israel against the nationalization of the Suez Canal by Egypt , which triggered the Suez Crisis . Pearson proposed the first dispatch of armed United Nations peacekeeping forces . Canadian troops were among the first to come to Egypt as part of this mission (see also United Nations Emergency Force ). In 1957, Pearson was awarded the Nobel Peace Prize for his role in resolving the crisis .

He was also the second president of the Atlantic Treaty Association from 1957 to 1958 .

The Liberals lost the general election in June 1957 . Although they achieved more votes overall than the Progressive-Conservative Party , they won fewer seats. On June 20, 1957, Saint-Laurent's government resigned. Pearson was elected the new leader of the Liberal Party on January 16, 1958 at the Ottawa Congress in the first ballot.

Right at the beginning of his activity as an opposition leader, he made a tactical mistake. In the House of Commons, he called on the progressive-conservative minority government of John Diefenbaker to cede power to the Liberals without elections because the economy was in a recession. But Diefenbaker called a new election instead, for which the Liberals were not at all prepared. At the end of March 1958 they lost more than half of their mandates and Diefenbaker was able to continue to govern with the largest majority in the country's history.

In the general election of June 1962 , the Liberals managed to make up for almost all of their losses. The progressive conservatives remained the strongest party, but they no longer had a majority of the seats. Diefenbaker's government finally collapsed when, contrary to the advice of the Secretary of Defense, he refused to deploy American Bomarc nuclear missiles in Canada. After a successful vote of no confidence , another election took place in early April 1963 . The Liberals became the strongest party again, but could not win an absolute majority either.

On April 22, 1963, Pearson was sworn in as the new Prime Minister. Despite the lack of a majority, his government was able to pass some significant laws, including general public health insurance ( Medicare ), the state pension scheme ( Canada Pension Plan ), a student loan program, the 40-hour week and a higher minimum wage. After months of debate, Pearson was also able to push through the introduction of a new national flag . The tax system was reformed and the Auto Pact liberalized the automotive industry. In most cases, Pearson could count on the support of Tommy Douglas' New Democratic Party .

Throughout his tenure, Pearson resisted great pressure from the Americans to send Canadian troops into the Vietnam War . When he was in the United States in April 1965, he campaigned for the air strikes in northern Vietnam to cease and negotiations to begin. US President Lyndon B. Johnson disapproved of this approach , and he severely criticized Pearson for it. Thousands of American conscientious objectors moved to Canada and thus evaded conscription.

Since he seemed to be clearly in the lead in the opinion polls, Pearson called out a new election after two and a half years in order to finally create a clear picture. But Diefenbaker's progressive conservatives managed during the election campaign to divert public attention from the government's successes to the failings of various ministers, thus making up for almost all of the deficit. The general election in November 1965 brought only marginal changes and Pearson's Liberal Party still did not have the majority it had hoped for.

To counter the increasing separatist tendencies in the French-speaking province of Québec , Pearson appointed prominent Québecans to his cabinet, including Pierre Trudeau , Jean Chrétien and John Turner (all future prime ministers). The Royal Commission on Bilingualism and Biculturalism should develop proposals on how to better integrate French Canadians into society and reduce their disadvantage. The work of the commission led to the passing of the Official Language Act in 1969 , which declared English and French to be languages ​​on an equal footing at federal level. Pearson was to be the last Canadian Prime Minister to speak only English as bilingualism became an (unofficial) requirement for this office.

In 1967 the centenary of the Canadian Confederation was celebrated. The most important event was the world exhibition Expo 67 in Montreal . In July of this year, the French President Charles de Gaulle was on a state visit. Since he was originally invited by the Prime Minister of Québec, Daniel Johnson , he first traveled to this province for protocol reasons. At a reception in Montreal on July 24th, he said the cheers of the people in that city reminded him of the liberation of Paris during World War II. The following day, he continued to incite the separatists when he shouted “Vive le Québec libre!” (“Long live free Québec!”) In front of a large crowd. Deeply upset, Pearson countered that Canadians did not need to be "liberated" and that de Gaulle's appearance in Ottawa was no longer welcome.

A new immigration law was also passed in 1967. It was the first ever that did not discriminate against certain groups such as Jews or Chinese , but instead - based on a point system that is still in use today - basically made immigration from all over the world possible. In the same year, the government introduced the Order of Canada , which has since been the country's highest civilian award. On February 1, 1968, another important project was completed. On that day the Canadian Forces Reorganization Act came into force. With this law, the Army, Air Force and Navy were combined to form the Canadian Armed Forces , which have had a uniform organizational structure since then.

On December 14, 1967, Pearson announced his early retirement. At the beginning of April 1968 a party meeting took place in which, after five ballots, Pierre Trudeau was elected as the new chairman of the Liberal Party, rather surprisingly . On April 20, Pearson gave office to his successor, who led the Liberals to an overwhelming election victory in June.

From 1969 Pearson headed the International Development Commission of the World Bank and published the Pearson Report in the same year . The report, co-authored by economic experts, assessed the results of twenty years of development policy and derived recommendations for the second development decade , which Pearson presented at the 2nd World Congress on Nutrition in The Hague in 1970. It was the first time that criticism of the modernization theory prevailing in development policy was voiced . The main criticism cited was that economic growth would not automatically lead to development in the respective country. In 1969 Pearson became Chancellor of Carleton University in Ottawa. He remained active in sports until old age, playing golf and tennis . In 1972 he died of liver cancer at the age of 75 . The memorial service took place in the presence of the British Prime Minister at Christ Church Cathedral in Ottawa.

Lester B. Pearson Building, seat of the Canadian Department of State

His son Geoffrey Pearson also entered the diplomatic service. For example, he was Canadian ambassador to the Soviet Union from 1980 to 1983.

Leader of the Liberal Party of Canada