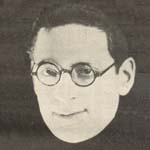 José Maza was the first member of his family to go into politics. All of his ancestors had been farmers. Maza's student days were the cause and harbinger of his later influence in the political life of his country. At the Universidad de Chile in Santiago he specialized in international law and civil law, he was also the leader and chairman of the student council.

Shortly after he obtained his doctorate in law, he was elected member of parliament in his home province of Bio Bio in southern Chile in 1920. He represented Bio Bio until 1925 , when he went to the Chilean Senate for the province of Valdivia , where he worked until 1953.

In his first year as a senator, he was appointed head of government and interior minister at the age of 63. Further years in the cabinet followed as Minister of Justice and Education. In 1936 and 1937 he was Vice President of the Senate, and he was also Chairman of the Senate Committee on External Relations from 1937 to 1953.

In his biography he was dubbed a staunch internationalist. From September 20, 1955 to November 1, 1956, he was President of the UN General Assembly.