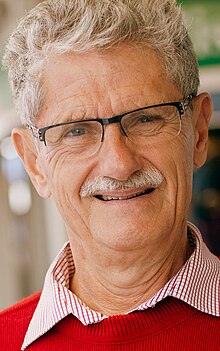 Mogens Lykketoft (born January 9, 1946 in Copenhagen ) is a Danish social democratic politician. On June 15, 2015, he was appointed Chairman of the General Assembly of the United Nations ; thus he chaired the 70th session of the UN General Assembly in September 2015 .

Lykketoft studied political science and worked on the economic council of the trade union confederation LO ( Arbejderbevægelsens Erhvervsråd ). Since 1964 a member of the party, he was elected to the Danish Parliament Folketing in 1981 . From January 20, 1981 to September 10, 1982 he was Minister of Taxation.

When the Social Democrats returned to power, Lykketoft was made finance minister under Poul Nyrup Rasmussen on January 25, 1993 . After the resignation of Niels Helveg Petersen , he changed to the post of Foreign Minister on December 21, 2000. On November 27, 2001, the Nyrup Rasmussen government ended and Lykketoft became opposition leader. With him as the top candidate, the Social Democrats lost the 2005 Folketing election . As a result, he handed over the party leadership on April 12, 2005 to Helle Thorning-Schmidt .

From 1987 to 2004 he was married to Culture Minister Jytte Hilden . In 2005 he married the journalist Mette Holm. Lykketoft has two grown daughters.

Foreign Minister of the Kingdom of Denmark

Minister of Finance of the Kingdom of Denmark

Tax Minister of the Kingdom of Denmark

Party leader of the Social Democrats