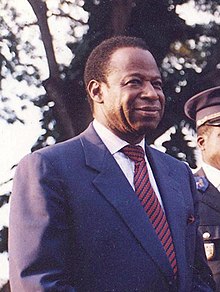 Amara Essy (born December 20, 1944 in Bouaké ) is a politician from the Ivory Coast and was President of the UN General Assembly in the 49th session.

From January 1977 to January 1978 Essy was chairman of the Group of 77 , an association and organization of developing countries based in Geneva , Switzerland .

In his diplomatic career he represented his country as a permanent representative at the UN from November 7, 1981 to November 1990. He was also responsible as an ambassador (based in New York ) and envoy for Argentina and Cuba .

Chairwoman of the African Union Commission