The focus of the article is on the use in Germany.

The first Canadian field postmark appeared in 1886 on the occasion of a maneuver in Brockville in eastern Ontario . Further maneuvers with the participation of the field post followed from 1909 to 1911.

The first foreign deployment of Canadian units that can be proven by stamps took place in South Africa from 1899 to 1901 . Cecil Rhodes , as prime minister of the Cape Colony , prepared the conquest of the Boer states that after the invasion Jameson in Transvaal in the Boer War was completed. A Canadian contingent involved in the fighting used two cachets for their service mail . However, the actual field post service was provided by the British Army .

The first Canadian contingent left Québec on October 30, 1899 . Reinforcements followed on January 21, 1900. These troops were accompanied by a postal department headed by Lieutenant (later Captain) W. R. Ecclestone of Hamilton, Ontario. On January 30, 1900, Ecclestone used an oval stamp "CANADIAN CONTINGENT / EN ROUTE / SOUTH AFRIKA" for the first letters that were exchanged on the Cape Verde Islands. "EN ROUTE" was later removed and the post was handed over to the international postal service via Cape Town.

For another mission, Postmaster General Hon. R. Lemieux opened Field Post Office 1 for the Canadian military on June 16, 1909 in a special ceremony on the occasion of the maneuver at Niagara Falls .

It was not until May 3, 1911, that the Canadian Postal Corps was set up as a special unit within the Canadian military. The new organization consisted of a post office at the headquarters in Toronto and a post office each in eight departments where a maneuver was held. These FPOs received their own stamps, which were only used during the summer maneuvers.

The varied stamps of the camps remained in use until they were withdrawn in the early days of the Second World War .

Stamp of the Canadian Field Post in the First World War

Before the “1st Canadian Expeditionary Force” (COEF, with 33,000 men) set out for England on October 3, 1914 , the six “Canadian Postal Corps Detachments” and the troops were given special stamps. A total of eight stamps were used. These stamps were already in use at the beginning of September in the Valcartier warehouse in northern Québec and on the convoy ships to Plymouth. After arriving in England and France , the stamps were used very sparingly until they were completely withdrawn in March 1915. The Canadian contingent was integrated into the British army and with it the Canadian field post.

In February 1915, the first units of the 1st Canadian Division were relocated to France. They strengthened the Allied forces. The Canadian Postal Corps maintained 31 "Canadian Post Offices" within the British field post in Flanders. The stamps were given the distinguishing letter "X", it was used by the Canadian units until 1917. With the appearance of the 10th British Corps in France, it was necessary to change to the "P" in the stamp image. The Canadian troops had to supply up to 150,000 men, 100,000 of them with Canadian units. The 50,000 were deployed with British units and units and used the British FPOs. All British field postmarks are therefore also possible on post from Canadian combatants.

The Canadians stationed in England used the local post office. The special CFPO (Canadian Field Post Office) only existed in larger garrisons. a. as liaison offices for the management of letters and parcels from or to Canada. Canadian subsidiary postmarks are also known from hospitals with Canadian patients.

Stamp of the Canadian Field Post in use in Siberia

Canadian units (over 4,000 men) were also deployed in Russia ( Murmansk and Vladivostok ) at the end of 1918 . They helped the Russian White Army and the Czechoslovak Legion fight the Red Army . The following have become known: single-circle stamps, rectangular stamps and various censorship stamps. They are very rare.

As the mobilization progressed, new field post offices were added in Canada. Numbers similar to our postcodes were used to identify the districts. Every camp, every barracks or station within a district was given a number with the district number in front. The camps in the Western Ontario district were given the numbers of the 100 series, the field post offices the numbers 101, 102, etc .; Alberta numbers of the 1,300 series.

During the Second World War, the CPC (Canadien Postal Corps) organized a new mail supply system for the army and air force. In Canada there were around 140 (MPO) military post offices (including 2 FPOs). The Royal Canadian Navy had its own naval post offices. These NPOs were also subordinate to the Post Office of the Royal Canadian Fleet (RCN) to supply the ships and the coast guard, a total of 25 NPOs were used.

The stamps were single-circle, double-circle or machine stamps for letters, roller or large rubber stamps for parcels or rubber hand stamps for registered items or postal orders.

The first stamps of the MPOs just like those of the NPOs only had numbers in the stamp image for security reasons. Since 1940 there was a Canadian field post outside the country. The CPC, “Canadian Postal Corps”, set up a special CAPO (“Canadian Army Post Office”) in Newfoundland in 1940, in Labrador in 1942 and in Kiska in the Aleutian Islands in 1942/43 . For a short time in September 1941 so-called "emergency stamps" were used in Newfoundland, Alaska and the Aleutian Islands.

In cooperation with the British fleet, a naval base was maintained in St. Johns, Newfoundland from May 1941 to July 1946. The base was called HMCS ("His Majesty Canadian Ship") AVALON. At least two FPOs are known. In addition to a single-circle stamp, a rubber stamp in the shape of a triangle "Postage Paid" from the Canadian postal administration was discounted.

The stamps of the military and other camps in both wars and the summer maneuvers and the air force stations do not quite fit into one scheme. Most of them were single-circle punches with a diameter of 23 or 24 mm. There were also large rubber stamps, as well as elliptical and machine stamps.

Flag of the Canadian Associated Forces, with the country flag and coat of arms

The deployment of Canadian troops overseas was more extensive than anything that was necessary in previous missions. The Canadian Army was involved with five divisions. The Canadian contingent fought in the "British Liberation Army", ie in the army that landed in Normandy and conquered Germany, and in the Mediterranean region in the "Central Mediterranean Forces" (CMF).

Canadian troops also crossed the German border. For the time being, they only stayed until 1946. The following units were in use: The

British field post offices were assigned to the Canadian Postal Service (CPC) and thus to supply the Canadian Active Service Forces (CASF) <Heer> and the Royal Canadian Air Force (RCAF) <Luftwaffe>. In addition to British field post equipment, our own Canadian single-circle stamps (3 types) as well as various machine and rubber stamps were used. At some field post offices there were several stamps at the same time, e.g. B. when the postal service of the army and air force worked together. Each unit was assigned a stamp with its own number. During this time, the Navy also set up its own Fleet Mail Offices. 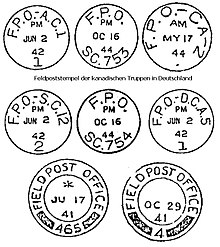 Type 4 machine stamp, issued June 1945 for use by the Canadian Army of Occupation in the Netherlands and Germany. The stamp was in use until June 1946. Circle diameter 20.5 mm, letter height 2 mm, length of the lines 50 mm, height of the line block 20 mm.

There is also a large single-circle stamp "FIELDPOST OFFICE", date "27 MAY 1944", "C5" of the 5th Canadian Infantry Brigade, which was part of the 2nd CDN Division on 6./7. Landed in Normandy in July 1944 and came to Germany via France - Belgium and the Netherlands. The British FPO stamps had a diameter of 27 mm and a letter height of 2.5 mm. A letter (“A”, “B”) or an asterisk (*) has been incorporated into the stamp to distinguish between several stamps in one unit.

The use of the "Canadian Postal Corps" (CPC) overseas became necessary again in the 1950s with the beginning of the Cold War and the Korean conflict. For this reason it was reactivated on November 1, 1950. Initially two units of the “Royal Canadian Army Service Corps” (RCASC) were subordinate to him. The task of the CPC was to jointly manage all three overseas postal services. (Army, Navy and Air Force).

The new postal service used four digits for every regular field post office (CFPO = Canadian Field Post Office) if they were deployed overseas, as well as the abbreviation CAPO for "Canadian Army Post Office". These CAPO's were subordinate to CFPO. CAPOs and CFPOs had similar stamps and registration slips.

Since January 1, 1965, the inscription for all Canadian field post offices has been CFPO. Two or three-digit numbers were assigned to CFPO. A single-circle, a rubber hand and a roller stamp were issued for each CFPO. There are also machine stamps.

The main supply port for all Canadian units in Europe is Antwerp. The post that is not sent by airmail also runs through Antwerp. Originally this mail went from Antwerp to the CAPOs and from there to the CFPOs.