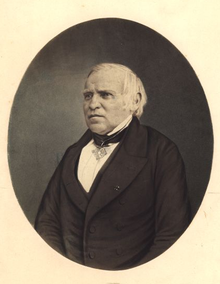 Christian Gottfried Ehrenberg (born April 19, 1795 in Delitzsch ; † June 27, 1876 in Berlin ) was a Saxon- Prussian, German zoologist , microbiologist , ecologist and geologist and was one of the best-known and most productive scientists of his time. He was a professor at the Friedrich Wilhelm University in Berlin and was appointed to the Secret Medical Council. He is the founder of micropalaeontology and microbiology . Its official botanical author's abbreviation is " Ehrenb. ".

Ehrenberg was born in the house with today's address Hallesche Straße 36 as the son of the Delitzsch citizen, hospital manager and city judge Johann Gottfried Ehrenberg. He attended the Pforta state school from 1809 to 1815 , studied theology at the theological faculty of the University of Leipzig from 1815 at the request of his father and then from 1817/18 medicine and natural sciences . During this time he described the mold Syzygites . In 1818 he received his doctorate with a thesis on mushrooms ( Sylvae mycologicae Berolinenses ) and became a member of the Leopoldina in Halle (Saale) . Then he went on several smaller expeditions. He was a research companion and friend of Alexander von Humboldt .

From 1820 to 1825 he went on an expedition to the Middle East and Arabia with his friend Friedrich Wilhelm Hemprich . Here they collected thousands of plant and animal species. They explored parts of Egypt , Palestine , the Libyan desert, the Nile Valley and the north coast of the Red Sea , where Ehrenberg was particularly concerned with corals . Another expedition in 1825/26 took them through Syria , the Arabian Peninsula and Abyssinia , where Hemprich died of fever on June 30, 1825 . After his return Ehrenberg published a number of articles on insects and corals as well as two volumes Symbolae physicae (1828-1834), in which he scientifically described mammals , birds and insects. 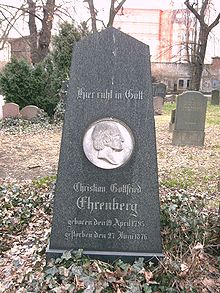 In 1827 he became an associate professor of medicine at the Friedrich Wilhelms University and in 1839 a full professor. In 1829 he accompanied Alexander von Humboldt and Gustav Rose on an expedition through Russia to the Urals and through Siberia to the Altai , during which they advanced to the Chinese border. After returning from this expedition, Ehrenberg concentrated on microorganisms that had not yet been systematically researched up to this point. During the next 30 years Ehrenberg examined countless water, rock and sediment samples for microorganisms. He used the microscopes of the Berlin optician Schieck, with whom he also worked closely. Every now and then, Schieck's microscopes were even called Ehrenberg microscopes in specialist circles. The protozoologist Ehrenberg described thousands of new species, including such well-known today as the Euglena ( Euglena ) and the paramecium Paramecium caudatum and aurelia paramecium .

He was particularly interested in the protozoa . In contrast to his opponent Félix Dujardin (1801-1860) Ehrenberg erroneously assumed that the unicellular organisms had the same organs as the higher (multicellular) organisms. Felix Dujardin spoke here of sarcodes in 1835, a term that was later replaced by the botanist Hugo von Mohl (1805–1872) with protoplasm , for the intracellular substance of the unicellular rhizopods .

He also proved that the sea ​​glow is due to microorganisms . He continued his studies of microorganisms in Berlin until his death. His grave is located in the St. Marien and St. Nikolai Cemetery I in the Berlin district of Prenzlauer Berg . It was dedicated to the city of Berlin as an honorary grave until 2015 .

He was married to Julie Rose (1804–48) since 1831 and his second marriage in 1852 to Karoline Friederike Friccius (1812–95), a daughter of the auditor general of the Prussian army Karl Friedrich Friccius . He had a son and 4 daughters from his first marriage and was the father-in-law of the chemist Carl Rammelsberg ( Mathilde (* 1835)) and the botanist Johannes von Hanstein ( Helene (1834–1890)). The botanist Carl August Ehrenberg was his brother. 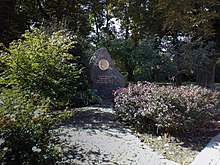 2013 in his hometown Delitzsch designed the facade with CG Ehrenberg

The collection of his studies is now in the Museum of Natural History at the Humboldt University in Berlin. The "Ehrenberg Collection" includes 40,000 microscopic specimens, 5,000 specimens, 3,000 drawings and almost 1,000 letters. The Museum of Delitzsch Castle also has a considerable Ehrenberg collection . Ehrenbergstrasse in Berlin-Dahlem was Albert Einstein's first address after he moved to Berlin.

In honor of Ehrenberg, the grammar school in Delitzsch was named Christian-Gottfried-Ehrenberg-Gymnasium in 1949 . One of the Bastian Islands in Hinlopenstrasse ( Spitzbergen ) is also named after Christian Gottfried Ehrenberg.

The genus Ehrenbergia Spreng is named after him . from the red family (Rubiaceae).

Ehrenberg had discovered the infusoria in Berlin and noticed that “a large part of the land on which Berlin stands consists of these tiny, hard-shelled animals”. Many in the city were concerned because structural damage had occurred in many houses and that the "little animals would even crawl away with the houses". Ehrenberg consoled him: "They do it so carefully, gentlemen, that you don't understand why your house is on the Elbe one morning".