The family coat of arms of the
von Schaffgotsch

The Counts Schaffgotsch are an old Silesian noble family with an extinct line in Bohemia , which originally had the name Scof (sheep, after the crest of their coat of arms) and came from Franconia .

The Scof have been among the largest landowners in Silesia since the 16th century and produced generals , bishops and entrepreneurs . The lead name "Gotsche" ( Gotthard ) was later added to the family name.

The Schaffgotsch are, like the Dallwitz , a branch of the ancient Franconian and Tyrolean family Scof (sheep) , in old Latin documents Ovis (Latin for sheep) . Whether the Ovis and the older Ovinius are of the same tribe, as claimed by several authors, cannot be proven today by sources. At the end of the 12th century, parts of the family with Saint Hedwig , daughter of Duke Berthold von Andechs-Meranien , who also ruled parts of Franconia, moved to Silesia as part of the German East Settlement , where over 100 cities under German law as well as churches and Hospitals emerge.

The family, which first appeared in Franconia in 1174 with Hugo dictus Scof , Canon and Sacristan zu Würzburg , can be traced back to the Giant Mountains since 1242 , as Duke Heinrich II the Sibotho de nobili familia ovium ( Latin Siegboth from the noble family of sheep ) enfeoffed with Kemnitz Castle near Hirschberg . One of his sons, Ulrich, became Burgrave of Bautzen and Vogt in Lusatia . His grandchildren, Heinrich (progenitor of Dallwitz) and Günther, received the Lausitzian possessions, while Gotsche I. Schoff († 1368) received the Silesian goods, which he expanded to include Hermsdorf and Petersdorf . 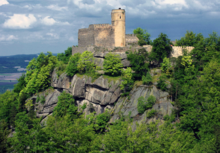 In 1360 Gotsche I. Schoff was enfeoffed with the Kynast Castle , located above the Hirschberg Valley and then part of the Duchy of Schweidnitz . Together with the Greiffenstein Castle and the associated Greiffenberg rule in the Jizera Mountains, it formed the core of the family estate until 1945. The son, Gotsche II. Schoff (around 1346–1419), acquired Warmbrunn below the Kynast in 1381 and founded a Cistercian provost house there. He had the Kynast castle expanded and donated its chapel. He founded and acquired many villages and enjoyed a high reputation at the imperial and royal Bohemian courts in Prague. His descendants always gave him the first name Gotsche (Gotthard) in honor of their first son, from which the name Schaffgotsch developed over time.

Gotsches II. Son Johannes († 1469) became governor of the principalities of Schweidnitz and Jauer . One of his six sons, Anton († 1508) founded the Bohemian line, while another, Caspar († 1534), Chancellor of Schweidnitz-Jauer, founded the Silesian line, which split into several houses. His son Balthasar founded the Langenau family , from which the present-day namesake emerge. After Balthasar's son Adam acquired the Trachenberg rule in the Trebnitz district, he and his six brothers were raised to the hereditary baron status in 1592, confirming their old master class as barons of Trachenberg .

One of the brothers, Christoph († 1601), on Kynast and Greifenstein, converted to Protestantism. His son Hans Ulrich (1595–1635) also acquired the Trachenberg estate from Adam. At the beginning of the Thirty Years' War he sided with the Bohemian Winter King , who was defeated in the Battle of White Mountain in 1620 , whereupon Bohemia and Silesia were subdued by the Habsburg Emperor Ferdinand II . Ulrich then swore the oath of allegiance to him, which allowed him to keep his goods. In 1627 the emperor awarded him the title Semperfrei , with privileges equal to that of a prince. With a cavalry regiment he had recruited himself, Hans Ulrich submitted to the imperial generalissimo Wallenstein . When he fell away by the Kaiser in 1634 and was murdered, Hans Ulrich was imprisoned in Regensburg . Although he protested his innocence under torture during his trial, he was beheaded in Regensburg in 1635 on Haidplatz and buried in the ambassadorial cemetery near the Trinity Church. His grave was lost in 1674. His estates were confiscated to reward the murderers of Wallenstein. His children were raised Catholics under Habsburg supervision in Olomouc; the eldest, Christoph Leopold (1623–1703), later gradually regained his possessions and rose to become governor of Silesia. In 1674 he was raised to imperial count. As a representative of the emperor, he chaired the Silesian Princely Days.

In 1675, Kynast Castle burned down completely as a result of lightning. The family moved their residence to the Warmbrunn Castle in Bad Warmbrunn near Hirschberg in the Giant Mountains , located below the castle in the Hirschberg Valley , which was built in the early 17th century as a two-wing Renaissance building and was expanded in 1720 to include a lodging house for guests and a baroque park. In 1777 the renaissance castle burned down and in its place the early classicist residential castle was built from 1784, which remained the residence until the expulsion and expropriation in 1945. From 1797 a spa house was built in the palace gardens and from 1836 a theater. As early as 1403 Gotsche II. Schoff had donated a provost's office in Warmbrunn, which was occupied by Cistercians from Grüssau Abbey . After secularization in 1810, the provost's office fell to the Counts of Schaffgotsch, who housed their major library (with over 80,000 volumes) and the ancient collection in the Long House . (Today the castle houses a branch of the Wroclaw Polytechnic and the provost's administrative rooms for the bathing establishment.)

The neighboring Hermsdorf Castle under the Kynast served mainly as the official seat for the administration of goods. The domain property in the Giant Mountains was administered from Schreiberhau , where a glassworks had existed since 1366 ; In the 16th and 17th centuries, glassmaker families who immigrated from northern Bohemia founded even more. In 1842 Count Leopold Christian (1793–1864) himself founded the "Josephinenhütte", named after his wife, a born Countess Zieten . Until 1945 the entire Silesian part of the Giant Mountains as well as the Jizera Mountains (excluding the part belonging to Upper Lusatia ) was owned by the Schaffgotsch. 1708 the elevation to the imperial counts took place , since 1825 Warmbrunn-Kynast has been led as a free state rule .

Fischbach Castle , also located in the Hirschberg Valley, was owned by the family from 1476 to 1580 and again in the 18th century. Also Bober Röhrsdorf with his remarkable residential tower was hers from 1732 to 1945. In the 16th century, the Schaffgotsch had Langenau ; In the local castle, which was largely rebuilt in the 19th century, a Renaissance room with religious and secular wall paintings and coat of arms friezes from 1563 from Schaffgotsch's time has been preserved. A renaissance castle of Caspar Schaffgotsch from 1559 is in Schwarzbach , still little changed today . At the beginning of the 17th century they bought Plagwitz .

The generations after the first imperial count held high offices as governors of Schweidnitz-Jauer, hereditary court stewards in Silesia, etc. An important political role was played by Philipp Gotthard von Schaffgotsch (1716–1795), who was Frederick the Great after the conquest of Silesia in 1747 as bishop of Breslau proposed and raised to the personal prince status. During the Seven Years' War, however, he sided with Maria Theresa and had to go into exile in Bohemia.

Hans-Ulrich Graf von Schaffgotsch (1831–1915) married Johanna Gryzik (1842–1910), the adoptive daughter and sole heir of the largest mining entrepreneur in Upper Silesia , Karl Godulla , which brought his mining empire to him. After the loss of the Gräflich Schaffgotsch factory in 1945, the descendants of the Koppitz branch still had a remainder of the subsidiary Braunkohlen- und Brikett-Industrie AG with smaller pits in northern Hesse. Anna Countess Schaffgotsch inherited the Lower Austrian Castle Niederleis from her uncle Josef Count Wallis in 1928 ; their descendants are resident there to this day.

The line of the Imperial Count Schaffgotsch called Semperfrei von und zu Kynast and Greiffenstein, Barons zu Trachenberg on Warmbrunn still exists today. It is a family tradition that the male members of the family are given the name Gotthard and the female members the name Hedwig. In the Upper Silesian family branch, the first-born often bears the name Hans Ulrich.

( Blazon from GHdA ) The family coat of arms is split eight times from silver and red. On the helmet with red and silver blankets, a silver lamb with a red collar and a golden bell in front of a natural deciduous tree, walking to the right.
The shield of the baronial coat of arms from 1592 is quartered; 1 and 4 the coat of arms of the family, 2 and 3 a crowned, golden griffin with raised flight and folded tail on a green three-hill, holding a silver stone in its claws (rule Greiffenstein). Two helmets, in front, with red and silver covers, that of the family coat of arms, behind, with blue and gold covers, the griffin of 3rd and 4th place. This coat of arms also remained the counts of the Bohemian (Anton) tribe.

In the imperial count's coat of arms from 1708 of the Silesian (Kaspar) tribe, the baronial coat of arms, covered with a ducal hat, becomes the heart shield. The main shield is the ducal Liegnitz-Brieg coat of arms: In the 1st and 4th fields the black, Silesian eagle with a clover moon (and cross) on the chest and in the 3rd and 4th the Brieg's red and silver one on a golden background Chess. The old helmets move to the left, and in the foreground there is another with black and gold covers and the eagle of the main shield in a gold field in front of a peacock frond as a gem.

According to a legend, the family originally had the sheep in the coat of arms; When Gotsche II. Schoff stepped before Emperor Charles IV in 1377 after a successful battle during the siege of Erfurt , he is said to have wiped his fingers, which were bloody from the fight, on his bare breastplate out of embarrassment and only then seized the imperial right. The emperor then made him a knight and instructed him to use the red stripes on his fingers in the coat of arms. (The legendary nature of this story is proven by the fact that Heinrich Schoff from the Lausitz line was resident in Thallwitz north of Leipzig since 1266 at the latest and his descendants, the Lords of Dallwitz , also carry the stripe coat of arms with the sheep as a helmet to this day .)