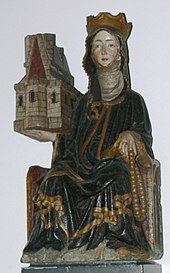 Hedwig von Andechs (also Hedwig von Schlesien , Czech Hedvika Slezská , Polish Jadwiga Śląska ; * 1174 in Andechs , † October 15, 1243 in Trebnitz ) was Duchess of Silesia . She is venerated as a saint in the Roman Catholic Church . In the general Roman calendar , her feast day is October 16 , in the Protestant calendar of names on October 15.

Hedwig's parents were Count Berthold IV of Andechs , Count of Tyrol , Carinthia and Istria , and his wife Agnes von Rochlitz from the Wettin family . Hedwig's brother Eckbert was Bishop of Bamberg , another brother Berthold was Patriarch of Aquileia , her sister Agnes was married to King Philip II of France . Another sister, Gertrud , was married to King Andrew of Hungary , whose daughter was St. Elizabeth of Hungary .

Hedwig was brought up in the monastery of the Benedictines of Kitzingen and at the age of twelve married the Duke of Silesia Heinrich I from the Silesian Piast dynasty , who also became Duke of Poland in 1233. According to tradition, after 22 years of marriage, she lived celibate with her husband . Their marriage has four sons and three daughters, among others

Hedwig and Heinrich I promoted the deepening of the Christian faith and the cultural development of Silesia. In 1202 they founded the Cistercian Abbey in Trebnitz. As a model of Christian charity, Hedwig supported the church, helped the poor and is said to have gone barefoot even in winter . According to tradition, her confessor warned her to wear shoes, whereupon she picked up the shoes. That is why Saint Hedwig is often depicted with shoes in her hands and a church in her hands.

After her husband died in 1238, Hedwig entered the Trebnitz monastery she had founded and had to experience that her son Heinrich II was killed in the battle of Wahlstatt in 1241 . Therefore, together with Henry's widow Anna of Bohemia , the daughter of the Bohemian King Ottokar I Přemysl , she founded a Benedictine abbey in Wahlstatt , for which they appointed monks from the Opatowitz monastery near Königgrätz .

Grave of St. Hedwig in the monastery church of Trebnitz

Hedwig von Andechs died in October 1243 and was buried next to her husband in the Trebnitz monastery church in front of the high altar. In 1267 she was canonized . Relics are u. a. in the Andechs Monastery , in the St. Hedwig's Cathedral in Berlin and in the St. Gangolfus Collegiate Church (“Selfkant Cathedral”) in Heinsberg .

Saint Hedwig is the patron saint of Silesia and Andechs , the diocese and the city of Görlitz and the St. Hedwig's Cathedral in Berlin , consecrated to her , which Frederick the Great had built as Hedwig's Church for the Catholics who immigrated from Silesia.

The dynasty of the Liegnitz-Brieger Piast was derived from her in a feminine line, also to emphasize a connection with Charlemagne . For this reason, the last Piastin Charlotte von Liegnitz-Brieg-Wohlau was buried at her feet.

After the Second World War, the expelled Catholic Silesians took the Hedwig worship with them to their new parishes; the St. Hedwig became a symbol of the lost homeland (e.g. St. Hedwig's Church in Görlitz ). Today St. Hedwig also as the patroness of reconciliation between Germans and Poles.

St. Hedwig is depicted as a princess or elector (for example in the high altar of St. Mary's Church in Frankfurt - with an elector's hat) who distributes alms, or in the habit of a nun . Her attributes include a crown, a church model that distinguishes her as a donor, shoes worn in her hands, crucifix , rosary , prayer book, image of the Virgin Mary or a statue of Mary and bread that she distributed to the poor.