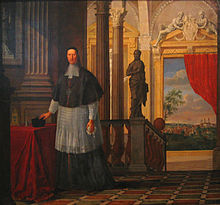 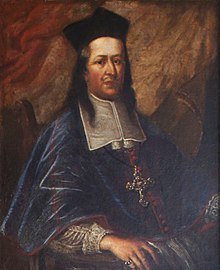 Albrecht Sigismund of Bavaria on a painting in the Fürstengang Freising 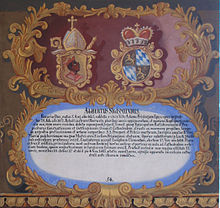 He became canons of Augsburg and Salzburg as well as provost of the cathedral in Constance and provost of the Altötting monastery . Under pressure from his uncle, the Bavarian Elector Maximilian I , Albrecht Sigmund first became coadjutor of Freising Prince-Bishop Veit Adam von Gepeckh in 1640 . After his death in 1651 he followed him to the bishop's seat without ever having received the ordination of priests. Albrecht Sigmund's reign is not considered to be very beneficial for the Hochstift Freising, despite some accents that he set from an artistic point of view: an increase in the stables; baroque cathedral portal; Construction of the Belvedere and the Princely Walk; Foundation of the Marian column in the center of Freising and creation of a courtyard garden outside the city fortifications.

Wörth Castle on the Danube : The Rondellzimmer at Wörth Castle was created under Albrecht Sigismund von Bayern

The Regensburg monastery, which was still heavily indebted, was nevertheless of interest to the Bavarian Wittelsbachers, as the ruling house tried to implement its ecclesiastical interests in this area in the sense of comprehensive state supervision. Nonetheless, Albrecht Sigmund tried to take responsibility for the diocese and bishopric towards his relatives.

The burial place of Albrecht Sigmund is in the Freising Cathedral in front of the stairs to the high choir; his heart was buried in the Gnadenkapelle von Altötting zur Erde according to the custom that has meanwhile become a tradition in the Wittelsbach house .