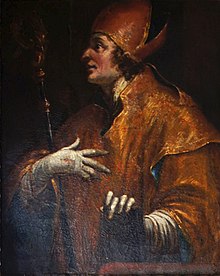 Hermann von Cilli on a painting in the Fürstengang Freising

Heraldic panel of Hermann von Cilli in the Fürstengang Freising

Hermann von Cilli (* 1383 in Cilli ; † December 13, 1421 in Cilli), also known as Herniosus with the Bruche or Armand de Cilli, was the illegitimate but subsequently legitimized son of Count Hermann II from the house of the Counts of Cilli and Sanneck, who had their headquarters in Obercilli Castle in Windischen Mark (today Slovenia).

King Sigismund became engaged to Barbara von Cilli in 1409 , the youngest daughter of Count Hermann II, who saved the king's life at the Battle of Nicopolis . Hermann II became one of Sigismund's most important advisers and so it was natural to fill the Freising Bishop's chair, which had suddenly become vacant, with his son Hermann.

Hermann was studying in Bologna at that time when Pope Johannes XXIII. appointed him Bishop of Freising on July 26, 1412 on the intervention of the German King Sigismund . Since he was too young to be ordained a bishop, he received a papal dispensation, which enabled him to take office in Freising . From his father he had to borrow in order to mature to 10,000 guilders servitia to pay. On September 8, 1413, he was anointed bishop. The Freising Cathedral Chapter was so surprised by the death of Konrad von Hebenstreits and the quick appointment of Hermann that it was unable to exercise its right to vote.

From 1414 to 1418 Hermann took part in the Council of Constance and represented the interests of King Sigismund there. In the summer of 1419 he concluded an alliance with the bishops of the Salzburg ecclesiastical province under the leadership of the archbishop to protect their spiritual immunity rights with the promise of mutual support against the territorial princes.

Thanks to the good relations with the royal family, his family managed to convince Pope Martin V to take him to the bishopric of Trento , which had been vacant since the death of Bishop Georg von Lichtenstein (August 1419). The papal appointment took place on March 29, 1421; However, Martin V had to take it back on September 13, 1421, because the Tridentine cathedral chapter refused to accept him because of a severe (groin?) Fracture. In order to be able to return to Trento, he traveled to his hometown of Cilli in late autumn and had an operation there, which he did not survive. He died on December 13, 1421 and was buried in the then parish church and today's Cathedral of Saint Daniel in Cilli. His tomb is in the presbytery of the church on the gospel side. 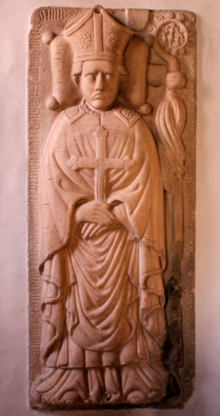