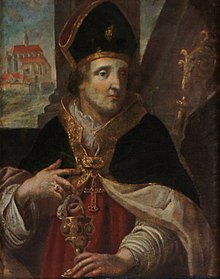 Conrad III. on a painting in the Fürstengang Freising

Coats of arms of Konrad III. in the Fürstengang Freising

First color representation of the Freising Mohren in 1316

Konrad came from a wealthy and respected patrician family Sentlinger from Munich . He was chaplain and secretary of the Freising Bishop Emicho Wildgraf von Wittelsbach († 1311) and was under his predecessor Gottfried von Hexenagger Freising Canon . He was the first Bishop of Freising to obtain a doctorate (in canon law) at a university (probably Bologna).

He was elected Bishop of Freising in 1314. Like his predecessor Gottfried von Hexenagger, Konrad knew how to maneuver between Ludwig the Bavarian and Duke Friedrich the Beautiful in the struggle for supremacy in the Holy Roman Empire of the German nation and not to favor either side, but to secure advantages from both parties to the conflict . In 1315 Konrad tried to mediate between Ludwig and Friedrich, but remained unsuccessful.

Under the reign of Konrad III. the Konradinische Matrikel was created in 1315/1316 , a medieval land register that listed the possessions of all prince-bishop's goods with their income and was at the same time a precise diocesan description in which all churches, chapels, monasteries and cemeteries were listed. In this register there is also for the first time a colored image of the Hochstift coat of arms, the " Freising Mohr ". It has been used as a seal for the bishopric since Bishop Emicho .

In 1319 Konrad III acquired from Ludwig the Bavarian the county Ismaning (also: county on the Yserrain ) and was able to significantly enlarge the bishopric; After all, a closed stretch of land on the east side of the Isar from Freising to the gates of Munich belonged to the Hochstift. In this purchase agreement the absolute sovereignty of Freising was expressly confirmed.

From 1319 to 1321, under his rule, the Johanneskirche was rebuilt on the Freising Cathedral Hill in the classic early Gothic style; on June 8, 1319, Konrad donated the associated collegiate monastery St. Johannes , which lasted until 1803. Konrad probably died on April 11th or 12th (around Easter) 1322 in Freising. In all of the Freising Chronicles it is reported that he was poisoned, allegedly by one of his servants. He was buried in the Johanneskirche next to the cathedral.