Gottfried von Hexenagger on a painting in the Fürstengang Freising 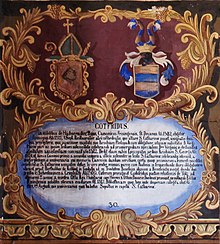 Coat of arms of Gottfried von Hexenagger in the Fürstengang Freising

Gottfried von Hexenagger is documented as a canon in Freising from 1302 . He came from the family of the Lords of Hexenagger (today Altmannstein municipality , Eichstätt district ). For the year 1309, a law degree at the University of Bologna is documented. He was appointed Bishop of Freising in autumn 1311. Gottfried was already known under his predecessor Emicho Wildgraf von Kyrburg as a learned cathedral schoolmaster and his administrator in spiritual matters; before his election he was a master's degree, archdeacon and cathedral dean in Freising. He was probably chosen by the cathedral chapter because of his education and his spiritual reputation.

Under his rule, the Gothic development in Freising took place relatively late ; As the first building of this style, he had the cathedral vestibule equipped with a ribbed vault (1314) and a Catherine altar built. Gottfried did not succeed in enlarging the episcopal territory. In the beginning he even had to spend considerable financial resources to obtain the rights to his possessions in Austria , in Carniola and in Carinthia from Frederick the Fair and Count Alexander von Görz and Heinrich III. to buy back from Gorizia . Gottfried knew how to navigate between Ludwig the Bavarian and Friedrich the Beautiful in the struggle for supremacy in the Holy Roman Empire of the German Nation and not to favor either side, but to get the benefit of each.

In 1314, because of the disputes between Ludwig and Friedrich, he went to Austria to look after the Freising possessions. Like his predecessor Emicho, he died on August 27, 1314 as a result of an illness in Vienna . His body was transferred to Freising and buried in his Katharinenkapelle.