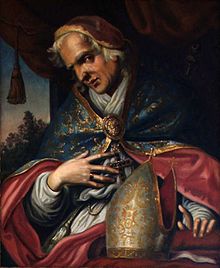 The coat of arms of Johann Tulbeck in the Fürstengang Freising

Tomb of Johann IV. Tulbeck von Freising in the Frauenkirche in Munich

Johann as a cleric

Johann Tulbeck came from a wealthy Munich councilor family who were members of the inner council. His father was a master goldsmith. Johann received his doctorate in law and in 1431 became canon of Freising and provost of Sankt Veith. From 1436 he was pastor of the Marienkirche in Munich. At the time of the Council of Basel 1431-1449 he was by Johannes III. Grünwalder appointed personal representative of the permanent vicar general. Since Grünwalder confessed to Pope Felix V , Pope of the Council, Bishop Nicodemus della Scala withdrew his office. After Nicodemus' death in 1443, his position was consolidated again and he was a highly respected member of the Freising Cathedral Chapter. When determining a successor for the late John III. In January 1453, Grünwalder renounced an election and made the candidate Johann Tulbeck bishop, as it were through the inspiration of the Holy Spirit . This procedure, practiced only once in Freising, corresponded to the Lateran Council of 1215: the name of the candidate is mentioned in the assembly and all eligible voters openly and spontaneously give their approval. On March 9, 1453, Pope Nicholas V gave his consent.

Johann as Bishop of Freising

The main task of Johann was to consolidate the shattered finances of the bishopric , which he succeeded. Due to his economical housekeeping, he was able to do the under Johannes III. Grünwalder bought back the Ulmerfeld estate (today Lower Austria) and acquired some smaller areas. Problems also caused numerous bands of robbers who were up to mischief in Bavaria and Austria. Johann managed to capture the robber captain Miltzl with his twenty men and he handed them over to Duke Siegmund of Bavaria , who had them executed. He was unsuccessful in Austria; a group of robber barons, called "the brothers", conquered the Hollenburg fortress in Freising and ruled the area. Only the citizens of Krems and Stein an der Donau recaptured the place and handed it over to Emperor Friedrich III, so that the area was lost to Freising. The Bishop John III. He continued the initiated monastery reforms with his visitations in 1460 and 1463. Thanks to his good relations with Friedrich III. he was appointed imperial judge in 1463 and carried out several trials on behalf of Frederick. During his term of office, pilgrimages also flourished, for example after St. Eberhard in Tüntenhausen , St. Wolfgang near Dorfen, St. Quirinus in Tegernsee , St. Korbinian and St. Sigismund in Freising Cathedral, St. Kastulus in Moosburg , St. Alban near Hörgertshausen and Neustift monastery . The Marian pilgrimage as a typical phenomenon of the late Middle Ages was also very popular, such as the Freising Cathedral , Maria Thalheim and Tuntenhausen . In the plague year of 1463, 5,000 people from Munich went on pilgrimage to Andechs , even though the city only had about 13,000 inhabitants.

On May 25, 1466, he consecrated Bishop Heinrich IV of Absberg as Bishop of Regensburg. On February 9, 1468, Johann and Duke Siegmund of Bavaria laid the foundation stone for the new St. Mary's Church in Munich .

In 1473 the Turks invaded the Windische Mark , conquered the Freising town of Gutenwert and completely destroyed it. The other possessions in Carniola were also ravaged by the Turks and badly damaged. Therefore, with the approval of the cathedral chapter, Johann decided to resign at the end of 1473 due to his old age and illness, in order to leave the bishopric to a younger regent. He retired to Munich, where he died on May 20, 1476. The new Munich Frauenkirche was already finished enough that he could be buried there. He had his tomb from Erasmus Grasser's school made while he was still alive.