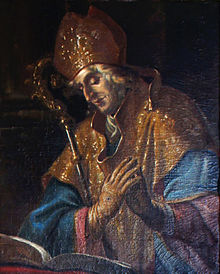 Johannes II. Hook on a painting in the Fürstengang Freising

The coat of arms of Johannes II. Hake in the Fürstengang Freising

Coming from the Hake family in Göttingen, he called himself "von Göttingen". Family names mentioned in the literature such as “Griese”, “von Westerholt”, “Ötting” or “von Zesterfleth” are demonstrably wrong.

Hake studied medicine and the fine arts in Paris and was since 1305 Magister Artium in Paris and from 1314 professor of medicine in Montpellier, where he had previously obtained the medical master's degree. In Montpellier he taught at both the medical faculty and the artist faculty. As "berühmtester doctor in the world" was applicable Hake 1314-1318 Doctor King Ludwig of Bavaria and since 1318 the personal physician of Baldwin of Trier . In 1319 he was a family member and doctor of Cardinal Stefaneschi in Avignon. In 1324 he became Bishop Elect of Cammin . For many years he was Baldwin's envoy to the Curia in Avignon . In his office as Bishop of Verden (1331 to 1341) he was often represented, he was only actually present there once for several months. As the first bishop directly appointed by the Pope in Verden, he first had to come to an agreement with the bypassed cathedral chapter. Later he transferred the administration of the diocese to his vicar general Gottfried von Werpe and stayed mostly in Avignon.

Johannes was also the personal physician of King John of Bohemia (1324) and Pope Benedict XII. (1335) as well as several cardinals . In 1331 he wrote the treatise "De cautela a venenis" , which he addressed as a letter to King John of Bohemia and in which he generally deals with poisonous murders. In 1341 he was transferred to the diocese of Freising by the Pope von Verden . Here, however, he was unable to assert himself against the cathedral chapter and the opposing bishops Ludwig von Kamerstein (1340–1342) and Leutold von Schaumburg-Julbach (1342–1349) supported by it. According to the Freising Bishop's chronicle, he never entered the Diocese of Freising. Until he resigned, he officially served as administrator of Verden until 1342 and as Bishop of Freising until his death in 1349.

He probably survived a plague in 1348 and is considered the author of “Contra epidemiam” . Johannes probably died on October 3, 1349. Johann was buried in Avignon.