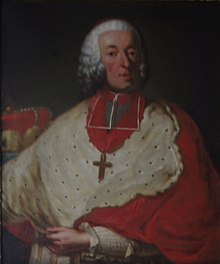 His parents were Maximilian II. Emanuel and Therese Kunigunde of Poland . Originally it was intended for the secular class. But the death of his older brother, Philipp Moritz on March 12, 1719 changed the situation. His brother Clemens August I of Bavaria took over the post in the north-west of the Holy Roman Empire (e.g. the diocese of Münster ), while Johann Theodor moved up. So he became Prince-Bishop of Freising and Regensburg. He was ordained a priest on April 8, 1730 . The episcopal ordination donated by his brother Clemens August on 1 October of that year. Co-consecrators were the Apostolic Vicar of the North , Johann Friedrich Adolf von Hörde , and Auxiliary Bishop Ferdinand Oesterhoff OCist from Münster. In 1724 he participated in the Wittelsbach House Union .

Since his two dioceses were not a particularly large power factor because of their small size, he was dependent on his brother, the Francophile Elector and later Emperor Karl Albrecht , and thereby also approached the Bourbons . Therefore, Louis XV supported. 1732 the candidacy of Johann Theodor for the office of high and German master . Nevertheless, he was defeated in the election by his brother, Clemens August I of Bavaria . On September 9, 1743, Pope Benedict XIV accepted him as a cardinal in pectore in the college of cardinals . The appointment was published at the consistory on January 17, 1746. He received the titular church of San Lorenzo in Lucina . From 1744 he was also Prince-Bishop of Liège and thus gained in importance. Pope Clement XIII. However, shortly after the death of his brother Clemens August on March 11, 1761, he refused to approve the election of Johann Theodor as Archbishop of Cologne and justified this with a scandalous, unspiritual way of life.

He came from the last generation of Wittelsbach prince-bishops . In the next generation there were not enough born sons to fill clerical offices.

His heart was buried separately and is located in the Chapel of Grace in Altötting .