Nicodemus della Scala on a painting in the Fürstengang Freising

Nicodemus della Scala - donor figure of the high altar retable he donated in 1443 for the Freising Cathedral, made by Jakob Kaschauer (today in the Bavarian National Museum in Munich on permanent loan from the Diocesan Museum Freising ) 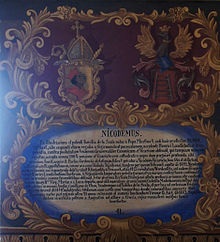 After the Scaliger had lost power in Verona, Guglielmo della Scala emigrated to Bavaria and founded the German line, which was also called "von der Leiter". From this branch comes Nicodemus, who lived as a subdeacon in Landshut . There he stood for a few years Heinrich XVI. , the rich, from Lower Bavaria available as treasurer.

Pope Martin V wanted to appoint the bishop of Gurk , Ernst Auer von Herrenkirchen , as bishop of Trient in 1420 and had planned the vacancy in Gurk for Nicodemus. However, Duke Friedrich IV of Austria-Tyrol successfully opposed this project because he had his own plans for Trento. A first transfer of Nicodemus to Freising in the summer of 1420 also failed, as the Pope had to cancel the appointment of Hermann von Cilli as Bishop of Trento due to physical ailments on the part of Hermann.

After the sudden death of Freising Bishop Hermann von Cilli on December 13, 1421, there were three candidates for the bishopric. In January 1422 , the cathedral chapter in Freising elected Johannes Grünwalder from Wittelsbach , an illegitimate son of Duke Johann II of Bavaria-Munich, as bishop. The Habsburg Duke Albrecht V stood up for Albrecht von Pottendorf at the Pope. Pope Martin V, however, decided on March 29, 1422 again for that of Duke Heinrich XVI. the rich of Bayern-Landshut supported Nicodemus della Scala. Duke Albrecht gave up his candidate in favor of Nicodemus, but the cathedral chapter and Duke Johann II insisted on Johannes Grünwalder. Only in autumn 1422 came a settlement through the mediation of the Salzburg archbishop: Grünwalder renounced the bishop's seat and instead became permanent vicar general with annual special payments and Nicodemus was able to move into Freising as bishop on December 7, 1423.

In response to the Council of Constance , Nicodemus had his vicar general carry out extensive reforms and monastery visitations in his diocese. Since he was also the papal chamberlain, he was often on the road on behalf of Martin V and not in Freising for a long time. From July 1431 he took part in the Council of Basel . There he represented the position of Duke Albrecht V of Austria, while his vicar general Grünwalder took care of the interests of the Hochstift Freising . In September 1432 Nicodemus left the council in order to be able to take part in the Frankfurt Princes' Day, which took place on October 4, 1432. Apparently he fell ill in Frankfurt and did not return to the council, but went straight to Freising. In his entourage was Enea Silvio Piccolomini, who worked as his council secretary until Nicodemus returned to Freising at the end of January 1433. The later Pope Pius II (1405–1464) described Nicodemus as “a man worthy of admiration in every respect” and made him a member of an imaginary discussion group in his book “Pentalogus de rebus ecclesiae et imperii”, published in 1443. Meanwhile, at the Basel Council, there was a break between Pope Eugene IV and most of the bishops. They declared Eugene deposed and on November 5, elected Amadeus of Savoy as Pope Felix V. Grünwalder, like most of those present, supported the new Pope and was appointed Cardinal and Bishop of Freising by him on October 12, 1440. Nicodemus openly confessed to Pope Eugene IV and withdrew the title of Vicar General from Grünwalder. Since then, until Nicodemus' death, there were repeated arguments with Grünwalder about who was the right bishop.

In September 1440 Nicodemus conducted a diocesan synod to implement the reforms of the Constance and Basel Councils in his diocese.

During his tenure, Nicodemus presented the Freising Cathedral with numerous works of art. He had a new high altar made by Jakob Kaschauer (today the Bavarian National Museum) in Vienna. In September 1440 he gave the cathedral a Byzantine icon of Mary from the 12th century, the so-called Freising Luke picture (today in the Diocesan Museum in Freising ). He was able to redeem numerous pledged areas, such as the County of Werdenfels , for the bishopric . He also regained the Klingenfels (now Klevevž) and Preisck castles in the Krain . However, the financial situation remained tense.

Nicodemus della Scala died in Vienna on August 13, 1443. He was buried in the Augustinian Church in front of the cross altar. A tomb no longer exists today.