Ernst was the son of Duke Albrecht V of Bavaria and his wife Anna of Austria . The latter was a daughter of Emperor Ferdinand I. The brother was Duke Wilhelm V of Bavaria. One of the nephews was Ferdinand von Bayern .

As a later son, Ernst was earmarked for the clergy at an early age. He received his theological and humanistic training from the Jesuits in Ingolstadt and Rome .

Ernst von Bayern on a painting in the Fürstengang Freising

Although there were scandals in his youth, he was considered suitable in the Catholic camp to oppose the advance of Protestantism, to secure and strengthen Catholic influence in the bodies of the Holy Roman Empire . In addition, the Wittelsbach family also wanted to develop their own power. The first possibility arose in the Hildesheim Monastery , which had already been greatly reduced in size as a result of the Reformation and whose existence was threatened by the surrounding Protestant princes. In 1573 it seemed advisable to the cathedral chapter , in order to preserve its own position, to elect Ernst a member of a powerful Catholic princely house as bishop of Hildesheim .

The position of the Archbishop of Cologne was central to strengthening the Wittelsbach influence in the north-west of the empire. As early as 1577, Ernst was supposed to be the successor of Cologne's Archbishop Salentin von Isenburg , supported by the Emperor and Pope , but he lost the election against Gebhard I. von Waldburg . In the same year he was ordained a priest. In 1581 he was elected Prince-Bishop of Liège . Shortly afterwards he also became the administrator of the Imperial Abbey of Stablo-Malmedy .

Gebhard I. von Waldburg married, fell away from the Catholic faith and tried to convert the Archbishopric of Cologne into a secular principality. A success would have greatly changed the balance between the denominations after the peace of religion in Augsburg had been calmed down to the detriment of Catholicism. As a result, the whole of north-west Germany threatened to become Protestant. Gebhard was deposed by the Pope and the Emperor and the majority of the cathedral chapter, which had resisted the policies of the Elector, elected Ernst of Bavaria as Archbishop of Cologne on May 22, 1583. The election of the cathedral chapter was supported by the imperial, Spanish and papal sides. Ernst was confirmed by the Pope immediately after the election, although the Council of Trent had strictly forbidden such an accumulation of offices.

With the help of Bavarian and Spanish troops, Gebhard I von Waldburg was expelled from the Archbishopric of Cologne and later from the Duchy of Westphalia in hard fighting during the Kurköln or Truchsessian War . For the House of Wittelsbach, the success meant a considerable increase in importance, as only Bavarian princes were elected in the Electorate of Cologne for almost 200 years. 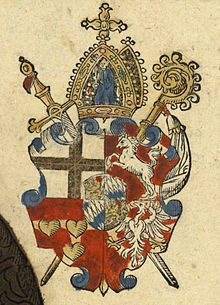 In 1584 he was elected Bishop of Munster . Ernst rounded off his sphere of influence by ensuring that Johann Wilhelm von Jülich-Kleve-Berg , the son of the religiously unstable Wilhelm the Rich , was married to his cousin Jakobe von Baden, who was raised in Munich as a Catholic .

He was now bishop of Freising, Hildesheim, Liège and Munster as well as archbishop of Cologne . Large parts of the empire were ruled by him, especially in the Rhine and Lower Rhine-Westphalian districts. If not carried out, he even planned a closer connection between the individual territories. It was therefore also referred to as the protective power of Catholicism in the north-west of the empire.

Politically, he was firmly on the imperial and Spanish side. He also supported the Catholic cause in the empire. There could be no doubt about his Catholic attitude, although he was personally not very interested in religious matters.

He fought strongly against Protestantism in his territories. Only in the Liege Monastery was religious policy less strict. He promoted the establishment of Jesuits and other orders. Jesuits settled in Emmerich , Bonn , Neuss , Aachen , Hildesheim and Münster , among others . In Münster, for example, the old cathedral school was given to them in 1588. Due to a visitation of the local diocese already initiated by his predecessors, he pushed the reforms forward. a. commissioned the official Everwin von Droste zu Hülshoff . He also brought the Capuchins to the Rhine. He also supported the founding of seminaries in Liège, for example. A permanent papal nunciature was established in Cologne in 1584 . This was one of the engines of the Counter Reformation in the Rhineland. In the Duchy of Westphalia, however, the Counter Reformation only began under his successor. In 1604, out of financial interests, he contributed to defame the Frankfurt Rabbinical Assembly of 1603 as a rabbinical conspiracy.

Domestically, in the sense of absolutism, he tried to suppress the influence of the estates. However, in 1590 he had to confirm the Hereditary Land Association of 1463, which restricted the electoral power, for the archbishopric as well as for the Duchy of Westphalia . In 1595 he issued comprehensive police regulations for the Rhenish and Westphalian possessions. A medical ordinance as a result of a plague epidemic was also issued in 1606. In 1593 there was a renewal of the ecclesiastical official court order . Ernst von Bayern, who was considered a friend of the mining industry, promoted mining in the Duchy of Westphalia, for example.

Ernst von Bayern was fond of mathematics, astronomy, astrology and alchemy and promoted painting and music. He was a sponsor of the Paracelsus edition of Johann Huser (who was also one of his councilors and personal physician) published in Basel from 1589 to 1591 . His own lifestyle hardly corresponded to the strict ideal of the Counter Reformation. Times of passionate rush alternated with limp indolence. He was unable to contain his personal preferences. An inclination to good food, hunting, and love affairs were part of a dissolute lifestyle. Ernst lived with Gertrud von Plettenberg , for whom he had the Palais Landsberger Hof built in his Arnsberg (secondary) residence . In 1595 he moved entirely to Arnsberg because of her. Together with her he had a son, Wilhelm von Bayern , who later embarked on an ecclesiastical career and became prince abbot of the monasteries of Stablo and Malmedy .

In the year he moved to Arnsberg, the elector was given his nephew Ferdinand of Bavaria as coadjutor . Ernst then withdrew from almost all government affairs, but retained his rights as elector in imperial matters and continued to exercise them. Although he was not well respected in most of the territories, the residents of the Liège bishopric saw him as a mild sovereign.

Ernst died on February 17, 1612 in Arnsberg (Westphalia); He was buried in front of the Dreikönigenkapelle inside the Cologne Cathedral .