Moritz von Sandizell on a painting in the Fürstengang Freising 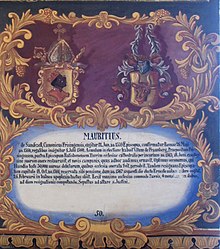 The highly educated canon came from a proven aristocratic family with ancestral seat in the moated castle Sandizell near Schrobenhausen . With the support of the Bavarian Duke Albrecht V, he promoted the Counter Reformation in his diocese. The state diocese visitation of 1560, suggested by the Bavarian duke , was able to finally push back the influence of the Reformation in his diocese. After the fire on June 15, 1563 in the north tower of the Freising Cathedral , he donated the Freising Cathedral Bells , today's Freising Bells, which are considered to be the world's largest preserved bells from the Renaissance period. As Bishop of Freising he resigned in 1566 in favor of his successor Ernst von Bayern .