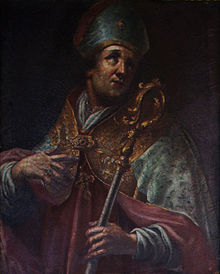 Konrad von Klingenberg on a painting in the Fürstengang Freising

Even as a deacon in Constance , he collected numerous benefices . From 1294 to 1321 he was provost of Bischofszell (today in the canton of Thurgau ). After the death of his brother Heinrich, Bishop of Constance Heinrich II von Klingenberg in 1307, he was one of the two candidates for the office of Bishop of Constance, but resigned after a double election. From 1310 to 1312 he was vicar general of Bishop Gerhard von Bevar , his brother's successor. After Gerhard's death he was Elekt von Konstanz from 1318 to 1319 . In the dispute between King Ludwig the Bavarian and the Pope , he took the side of Avignon and traveled to Pope John XXII in 1319 . to confirm his choice. In Avignon he renounced the Konstanzer claim and got 1322 from Johannes XXII. the diocese of Brixen awarded.

In Ludwig loyal Brixen he quickly unpopular because he sold goods of high pin to the due servitia be able to pay for the Pope. In Constance, too, there were irregularities in his benefice administration. Although he was Bishop of Brixen until July 1324 , he was not consecrated.

On July 5, 1324, Pope John XXII appointed Konrad as the new bishop of Freising. However, the cathedral chapter loyal to the king was unwilling to recognize this. Nevertheless, Konrad moved into Freising in August 1324, but at the end of August there was a small skirmish between the supporters of King Ludwig and the followers of Konrad, in which the bishop was injured and was able to flee to Constance. King Ludwig then placed the city under his special protection during his visit on June 12, 1325. Konrad, who was supported by the Habsburgs , was only able to assert himself in the Austrian possessions of the diocese. However, when King Ludwig set out for Italy in March 1327, Konrad secured the support of the Lower Bavarian Duke Heinrich XIV. And so it was possible for him to move into Freising as bishop in November 1327.

When Ludwig returned from Italy, Konrad fled to Austria in February 1330 and never returned to Freising. From then on, the diocese was administered by Provost Leutold von Schaunberg. Konrad had the cathedral chapter through Pope Benedict XII. excommunicate, but this had no effect.

In 1331 he is named as the founder of the Cistercian convent Mariazell zu Kalchrain . Through his mediation, the Cistercian Sisters received the church sentence for Herdern from the St. Gallen monastery .

Konrad died on April 7, 1340 in Ulmerfeld (today the municipality of Amstetten / Lower Austria ) and was buried in the collegiate church of Lilienfeld Monastery in Lower Austria.