The Archdiocese of Trento ( Latin Archidioecesis Tridentina , Italian Arcidiocesi di Trento ) is a Roman Catholic Archdiocese based in Trento . The archbishopric is spatially identical to Trentino and forms the ecclesiastical province of Trento with the subordinate diocese of Bozen-Brixen in South Tyrol .

The patron saint of the archdiocese is the martyr bishop Vigilius of Trient , the bishop's church is the Cathedral of St. Vigilius in Trento , consecrated in 1145 .

Legend has it that Trento has been the seat of a bishopric since the 1st century, but Abundantius is the first bishop to be proven in 381 as a participant in a synod of the Western Church convened by Emperor Gratian in Aquileia . Since 952 the diocese belonged to the Holy Roman Empire . The bishops carried the title of Prince-Bishop in the Holy Roman Empire .

In the 16th century the diocese was the scene of the Council of Trent . Until 1751 the diocese of Trento was part of the ecclesiastical province of Aquileia , then the ecclesiastical province of Gorizia . In 1772 it was exempted (i.e. directly subordinated to the Pope), and from 1825 it was again suffragan (this time of the Archdiocese of Salzburg ). Since 1920 Trento was exempt again and in 1929 it was raised to an archbishopric (at that time still without suffragan dioceses).

At the beginning of the 11th century, when King Heinrich II transferred the County of Trento (1004) , the County of Bozen (1027) and the County of Vinschgau to Emperor Konrad II, the clerical principality of Hochstift Trento was created , with which the Bishop of Trento now also received secular power over the city and a region beyond the diocese. Whereby an actual affiliation of the Vinschgau to the Hochstift cannot be proven and, if ever really given, no longer existed in the early 12th century. The county of Bozen was also lost to the Counts of Tyrol in the early 13th century. 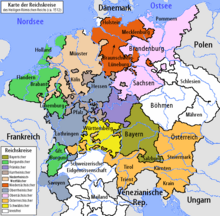 From 1150 the counts of Tyrol were bailiffs of the bishopric, from 1253 the Meinhardiner , from 1363 with the takeover of the county of Tyrol the Habsburgs secured this office, who with the compactates further expanded their sphere of influence on the duchy of Trento. The bishopric covered a little more than half of today's Autonomous Province of Trento or an area of ​​around 3,400 km². Until 1803, the bishopric was directly imperial and held a virile vote in the Imperial Council of the Holy Roman Empire of the German Nation . Around 1800 it had about 155,000 inhabitants. In 1803 it came to the County of Tyrol ( Austrian Empire ) and with Tyrol 1805–1809 to the Kingdom of Bavaria and 1810–1813 to the Kingdom of Italy . From 1814 the diocese became Austrian again , and in 1919 it fell to Italy along with South Tyrol . The use of the title " Prince Bishop " and the use of the associated secular symbols of dignity (such as the prince's hat and coat ) was approved in 1951 by Pope Pius XII. also formally abolished.

Karl Anton von Martini , lawyer and creator of the Austrian General Civil Code , was born in 1726 on the territory of the Bishopric of Trento, in Revò .

Italy 1499: The bishopric (Vesc. Di Trento) belonged to the Austrian Empire, not to Imperial Italy , with the Tyrol bordering to the north . To the east, south and west it was surrounded by territories of the Republic of Venice .

Archduchy of Austria ( with Austria under the Enns  • Austria above the Enns ) | Duchy of Styria  | Duchy of Carinthia  | Princely county of Gorizia  | Duchy of Carniola  | City of Trieste  | Fürstete Grafschaft Tirol  | Margraviate of Istria  | The various front-Austrian rulers  | Brixen Monastery  | Chur Monastery  | Hochstift Trento  | Ballei Austria of the Teutonic Order  | Ballei An der Etsch of the Teutonic Order  | Lordship of Tarasp
County of Schaunberg  (until 1548)  | Electorate of Salzburg  (from 1803, previously as Archbishopric of Salzburg in the Bavarian Empire)