The interior of the church

The Basilica of San Lorenzo in Lucina ( Latin: Sancti Laurentii in Lucina ) is a church in Rome consecrated to St. Lawrence . It is the parish church of the same parish and titular church of the Roman Catholic Church . It has the rank of a minor basilica and was a station church for the Friday of the third week of fasting . It has, among other things, art historical significance. a. through works by Gian Lorenzo Bernini and the tomb of Nicolas Poussin . The composer Bernardo Pasquini also found his final resting place in the church.

The church is in the III. Roman Rione Colonna in the Piazza di San Lorenzo in Lucina , near the Via del Corso , the former Via Lata on the Marsfeld , about 150 meters north of the Palazzo Montecitorio .

During excavations in the 1980s, foundations of predecessor buildings from late antiquity as well as remains of an early Christian baptistery were found in the nave . The late antique building complex is a multi-aisled building from the 2nd century, which is believed to have been a trading house with a portico to Via Lata . Remains of a room have also been uncovered under the front part of the church, which could have references to the early Christian titulus in Lucinis , which is documented there . Because this Titulus has probably where the Roman Lucina been inhabited house, as ecclesia domestica has served for the meetings of the Christian community and where the followers of October 1, 366 deacon Damasus had come together in order for him bishop of Rome to choose as reported in the Gesta inter Liberium et Felicem . 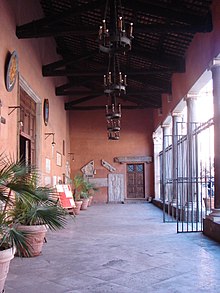 There are no reliable sources on the history of the origins of the church. The first church building was built around 435 under Pope Sixtus III. (432–440) erected above the ecclesia domestica mentioned , which was approved by the emperor Valentinian III. needed because the new church with the right aisle was to extend partly on adjacent public land, namely on the Horologium Augusti , whose Egyptian obelisk , used as a gnomon , was originally located near today's sacristy of San Lorenzo in Lucina. This 595 BC The obelisk was erected in Heliopolis by Pharaoh Psammetich II and then transported to Rome by Emperor Augustus . It has stood on the Piazza di Montecitorio since 1792.

Hugo Brandenburg explains about Lucina and the patronage :

“This church is therefore a private foundation of an otherwise unknown Lucina, who later dedicated to St. Laurentius was consecrated, as the name in basilicam sancti Laurentii martyris qui appellatur titulus Lucinae (Basilica of St. Laurentius, which is called the Titulus of Lucina ) in the Liber Pontificalis in the biography of Pope Sergius I (687-701) proves (Lib. Pont. I, 376). "

The orientation of the three-aisled basilica (approx. 54 × 25 m) with an apse in the southeast and three portals in the northwest was determined by the foundations of the ancient predecessor buildings. Depending on nine pillars carried the arcades of the nave with ten large arched windows under an open roof. The slightly retracted apse adjoined the nave; the side aisles were flat. On the west side of the basilica was a baptistery with a round baptismal font from the 5th century, which was accessible from the right aisle.

The grate on which Laurentius is said to have died as a martyr is mentioned for the first time in around 900; Today it is located in the reliquary from the 18th century under the altar of the Laurentius Chapel (first chapel on the right).

When Rome was sacked in 1084 by Robert Guiskard's troops , the church was so badly damaged that Pope Paschal II (1099–1118) had to replace it with a new building in Romanesque style. A three-aisled basilica and a narthex with six granite columns and the campanile were built on the previous floor plan while retaining some of the wall remains, as well as the triumphal arch and the apse . The previous pillars of the central nave were replaced by pillars . The end of this construction work was presumably marked with the consecration of the church by antipope Anaklet II on May 25, 1130; this church consecration was then - like all church acts of Anaclet II - canceled by the Second Lateran Council of 1139, so that on May 26, 1196 by Celestine III. the final church consecration could be made.

When the basilica was rebuilt around 1650, the central nave walls were raised, rectangular windows were installed, a new flat ceiling was drawn in and decorated with paintings and the aisles were converted into chapels. Most of the baroque furnishings were removed again in 1857 and the interior was designed in a classicist style.

The new owner of the title, Albert Cardinal Ranjith, took possession of the Church on Sunday, February 13, 2011.

In addition to its role as a station church for the Friday after the third Sunday of Lent , San Lorenzo in Lucina was also a station church on April 25 for the Litaniae maiores (great procession of prayer) from the 9th to the 14th century , because it began there and was the first Statio . At San Lorenzo in Lucina, the Pope or his deputy spoke the first oration of the procession , which then continued on Via Lata and Via Flaminia towards the Basilica of San Valentino (second station) and the Milvian Bridge (third station) and finally ended at St. Peter's Basilica .

The facade is determined by the single-storey column portico in front of it, consisting of six granite columns, over which lies a strong architrave that was cut out of the shaft of a very long marble column. The vestibule was built in 1193 and has been modified several times since then, especially the gable shows the changes of the 17th century. The long sides of the church are built up. The octagonal lantern of the baptistery can be seen on the left behind the facade . In the open vestibule next to the church gate there are two portal lions from the 12th century, some of which are embedded in the wall; the right lion seems to be looking after a child.

Church interior towards the entrance

The high altar with the crucifixion by Guido Reni

Tomb of Gabriele Fonseca by Bernini

Inside the church, the first thing you notice is the richly gilded coffered ceiling built in 1650 . The oil painting with the Ascension of Christ is surrounded by images of the saints whose relics are kept in the church, in particular Laurentius, Damasus and Lucina .

The nave opens between the pillars through arcade arches into the side chapels , a total of ten. There are windows above the not particularly noticeable cornice . The church is decorated with frescoes and stucco work, but compared to other churches from the Baroque era, it is simple and reserved.

The famous altarpiece of the high altar , Christ on the Cross, comes from Guido Reni (around 1635). Behind the altar is a marble bishop's chair from the time of Pope Paschal II with a dedication inscription by him from 1112.

This chapel (4th on the right) is the most important in the church. It was designed and furnished by Gian Lorenzo Bernini around 1663 as the family chapel of the papal doctor Gabriele Fonseca. Above all, one can admire the bust of Fonseca, who is leaning out of the window and turning towards the altar, showing emotion and holding his chest with his left hand; it is said to be the moment when Fonseca is gripped by the miracle of transubstantiation .

The third chapel on the left is - a rarity in Rome - dedicated to St. John Nepomuk . Besides the statue of St. Nepomuk on the altar (18th century) has two pictures on the side walls showing his martyrdom after falling from Charles Bridge in Prague and the discovery of the corpse.

The tomb of the painter Nicolas Poussin, who died in 1665, is on the second pillar on the right. The tomb, erected in 1830, was donated by the French writer and diplomat François-René de Chateaubriand . Léon Vaudoyer provided the design .

The composer Josef Mysliveček (1737–1781), a friend of Mozart's who valued him as a composer, died in Rome, and Sir Barry arranged for his teacher and friend to be buried in this church. During the aforementioned excavations in the last decade of the 20th century, the grave and the long-lost grave monument were found again. However, it was no longer erected, but replaced by a marble epitaph on the first pillar in the front right as a counterpart for Elsheimer's memorial plaque opposite.

Adam Elsheimer is considered the most important German painter of the Baroque. Born in Frankfurt / Main in 1578, he lived in Rome from 1600. He quickly gained a reputation among art connoisseurs and recognition among painters. But he painted little and in small formats. He became impoverished, fell ill and was buried in an anonymous grave on December 11, 1610 at the age of 32 in his Roman parish church. Exactly 400 years after his death, since December 11, 2010, an epitaph on the first column in the front left has been commemorating the pioneer of Baroque painting and praising him as one of the first to use a telescope when painting the starry sky . Even if he was largely forgotten under the glory of the great Dutch and Italians, his merits are undisputed. Elsheimer's pictures were still copied and engraved in copper 200 years after his death; Rubens lamented his untimely death; Sandrart writes of him with admiration. His portrayal of the “Flight into Egypt” is unmatched, a towering night piece with a Holy Family sheltered in God's creation under a never-before-seen starry sky, probably observed through a telescope even before Galileo .

The organ of the church was built in 1911 by the Mascioni organ workshop and has 21 stops on two manuals and a pedal .