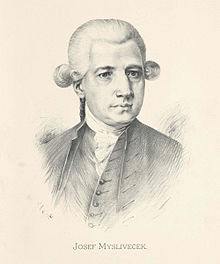 Josef Mysliveček was the son of a miller. He and his twin brother Joachim received their first lessons at the Dominican normal school at the St. Gallus Church in Prague and probably at the Jesuit high school in the Clementinum . From 1744 the brothers studied philosophy and literature at Charles University in Prague , which Josef left in March 1753 due to lack of academic success. In May 1758 he and his brother started working in their parents' mill; In 1758 they became journeymen, in 1761 master millers. Soon afterwards Joseph renounced his inheritance.

He took composition lessons with Franz Johann Habermann (1706–1783) and organ lessons with Josef Seger (1716–1782); He probably earned money as a violinist. In 1763 he published his first works, dedicated to Count Vincenz von Waldstein : six symphonies named after the months from January to June.

On November 5, 1763 he left Prague, supported by Count Waldstein, to study singing and composition with Giovanni Pescetti (1706–1766) in Venice . His first stage work, Semiramide , was performed in Bergamo in 1765. He was called "Il Boemo" ( the Bohemian ) or "Venatorino" ( The little hunter , as his name translates) because of his name, which is ineffable for Italians .

In December 1766, Mysliveček was commissioned to compose Il Bellerofonte . He wrote the work in a short time and performed it on January 20, 1767 in Naples with important singers such as the tenor Anton Raaf (1714–1797) and the soprano Caterina Gabrielli (La Gabrielli, 1730–1796), with whom he had a liaison is said. The success of this opera earned him a new commission: he wrote Farnace for the court of Naples , an opera whose first performance was a triumphant success. During this time he was the highest paid opera composer in Italy; his fame spread across Europe. Eighteen of his operas were copied for the court in Portugal, and his works were printed in Paris, Amsterdam and London, which was not a matter of course in the 18th century.

In 1768 he was in Prague, in 1769 in Venice, Padua and Florence. He first met Wolfgang Amadeus Mozart , with whom he was on friendly terms, in Bologna in 1770, and again on May 15, 1771 in Milan. In 1772 he traveled to Vienna, where an opera commission had brought him, where Charles Burney met him, possibly also to Munich. In 1773 Mysliveček was back in Italy, where he met Mozart again. On November 4, 1773, he directed the performance of Orfeo ed Euridice by Christoph Willibald Gluck .

In 1775 the first symptoms of syphilis appeared , which eventually led to a disfiguring facial paralysis and the loss of his nose. He also struggled with financial problems. In 1777 he was back in Munich. His operas Ezio and his oratorio Abramo ed Isacco were successfully performed. He had to go to the hospital, where Mozart visited him. The latter described him on October 11th as follows: “If it weren't for his face, it would be completely the same; full of fire, spirit and life ”. He tried in vain to get Mozart an opera commission at an Italian theater. After returning to Italy, his star began to decline. In 1779 his opera Armida fell through, and the following operas were no longer a success. After a painful operation - as a futile attempt to cure his syphilis, his nose was removed - he died impoverished and forgotten in Rome. Sir Barry or Brady, an English friend and student, had him buried in the Roman church of San Lorenzo in Lucina . The encyclopedia of music in the past and present mentions that the tomb - "a monument that is now lost" - went under. It was rediscovered during excavations in the 1990s. At that time you could see it on the guided tour of the excavation under the church. It was no longer built. Today there is a newer marble plaque with a picture and an inscription on the front right of the first pillar, in which it is called il boemo (“the Bohemian”).

Psalms and other liturgical forms

The lyricists as well as the date and place of the premiere are named below.

Sonatas for a solo instrument