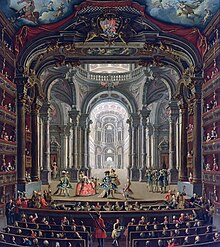 The Teatro Regio di Torino (German Royal Theater of Turin ) is an opera and theater house in the Piedmontese capital Turin in north-western Italy .

The Teatro Regio was built by the master builder Benedetto Alfieri according to plans by the architect Filippo Juvarra in Piazza Castello in the city center. The opening took place in 1740 with the performance of a work by Francesco Feo . By royal order, the theater was closed in 1792 and the building was used as a warehouse. During the French occupation of Turin under Napoleon Bonaparte , the theater was reopened and renamed "Teatro Nazionale". After the French left, the theater remained open, but was renamed "Teatro Imperiale" again. After times of financial uncertainty, the house was taken over by the city of Turin in 1870. A heyday of the house were u. a. the years 1895–1898 under the direction of Arturo Toscanini with numerous premieres of the works of Richard Wagner . Giacomo Puccini's La Bohème also premiered on February 1, 1896 . In the 1905/1906 season, the opera Siberia was played here, again under Toscanini, who had returned for this season . In 1936 the Teatro Regio burned down and was only rebuilt from 1967 under the architect Carlo Mollino . It reopened in 1973 with the performance of Giuseppe Verdi's opera Les vêpres siciliennes .

Residences of the House of Savoy